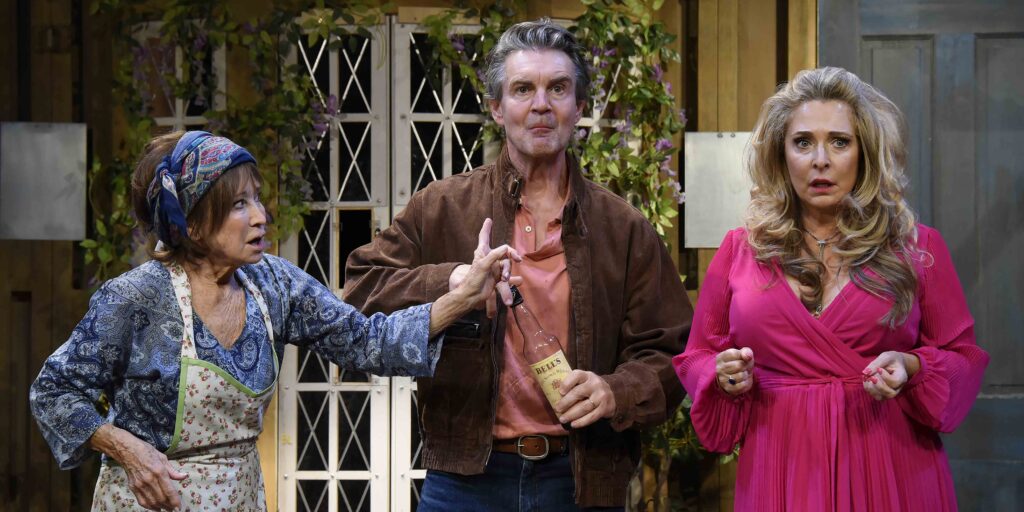 I remember being told of a previous production of Noises Off where a customer complained that the play was under-rehearsed and the Director kept having to go up on stage to talk to the cast! I would have offered them complimentary tickets to see the show another night.

This is a play I know very well having seen it twice before – the original London production 40 years ago with the hilarious John Quayle and the slightly inferior revival at the National Theatre in 2000 directed by Jeremy Sams – and having both directed and appeared in it in Rep.

Each of the three acts contains a performance of the first act of a play within a play, a terrible farce called Nothing On. Act One is set during the technical rehearsal at the (fictional) Grand Theatre in Weston-super-Mare at midnight, the night before the first performance and the cast are hopelessly unready. Act Two shows a Wednesday matinée performance one month later, at the (fictional) Theatre Royal in Ashton-under-Lyne. seen from backstage, providing a view that emphasises the deteriorating relationships between the cast. Act Three depicts a performance near the end of the ten-week run, at the (fictional) Municipal Theatre in Stockton-on-Tees when relationships between the cast have soured considerably, the set is breaking down and props are winding up in the wrong hands, on the floor, and in the way.

As funny as ever and much funnier than the shows it has inspired such as the hugely over-rated The Play That Goes Wrong, this is a very good production although it never really reaches the heights of that original London one. There are some excellent performances especially from Felicity Kendal as Dotty Otley, an experienced actress who has money invested in the show. I wasn’t really sure what to expect from Kendall however she has clearly lost none of her immaculate comic timing or laconic facial expressions. Tracy-Ann Oberman is simply splendid as the gossipy Belinda Blair who carries on regardless, Joseph Millson is wonderfully bombastic as Garry Lejeune whose performance disintegrates along with the show and Matthew Kelly is the stand out as Selsdon Mowbray, an alcoholic who is years past his sell by date.

This is a wonderfully written and masterfully constructed play and director Lindsay Posner brings it all together with aplomb. I did feel like something was missing in a show which manages to start with the funniest act and end with the weakest (not how I remember it) however perhaps I am remembering that 1982 production with rose-tinted glasses. This is still first class entertainment and an excellent opportunity to see a much-maligned genre of theatre and probably the best farce ever written.