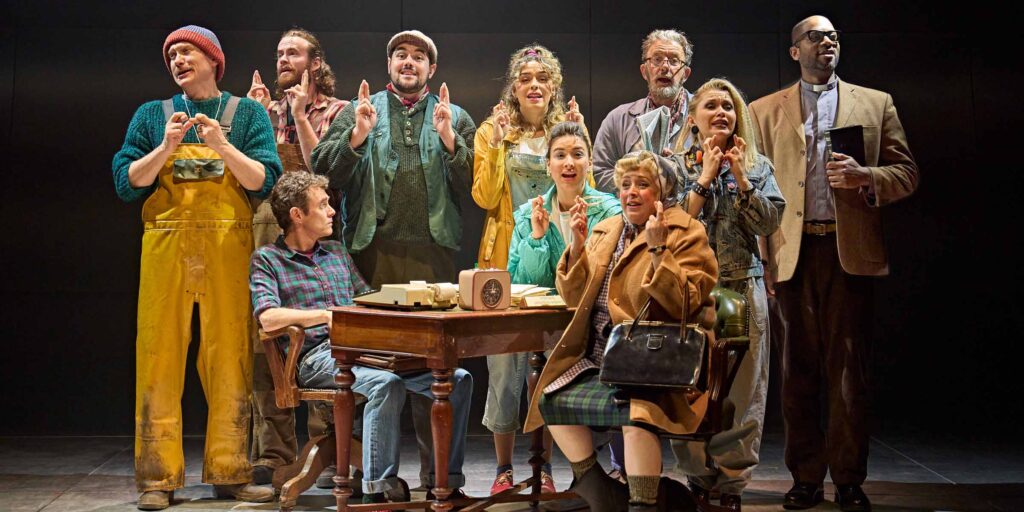 After six years as Chichester Festival Theatre, Artistic Director Daniel Evans is stepping down in the spring of 2023 to lead the Royal Shakespeare Company as co Artistic Director alongside Tamara Harvey (Clwyd Theatre).  His Chichester tenure began with Alan Bennett’s Forty Years On and went right through to the incredible Alecky Blythe Our Generation in April this year.  Local Hero will be the final production at Chichester under Daniel’s direction.

Many will remember Bill Forsyth’s much-loved iconic 1983 film with a soundscape by Dire Straits founder Mark Knopfler.  Adapted for the stage by David Greig and still embellished with Knopfler’s character-driven lyrics, this heart-warming theatrical version will appeal both to newcomers and those who adore the film.  A story that resonates strongly today with our very real environmental concerns battling with the world’s fuel demands.

Set in the 80’s, a Texan oil executive Mac MacIntyre flies to a remote Scottish fishing village with considerable funds to buy up the local resident’s homes.  This beautiful location (with a symbolic red telephone box) being the only option to accommodate the oil tankers from an offshore oil field.  Many of the locals are excited by the prospect of cash for the black gold and the local hotelier Gordon is appointed negotiator.  However, one of the locals opposes the deal and along with magical, dancing Northern Lights Mac gets seduced by the isolated location and the strong community spirit.

Frankie Bradshaw’s imaginative set featuring a simple curved backdrop manages to transform from a pulsating American office through to a sandy beach!  Captivating sky projections, great sound effects and a magnificent band (under the direction of Richard John) all join forces to create the Gaelic atmosphere.

This will appeal to a wide demographic and rapturous applause with a standing ovation brought this nostalgic tale and joyous music to a close.