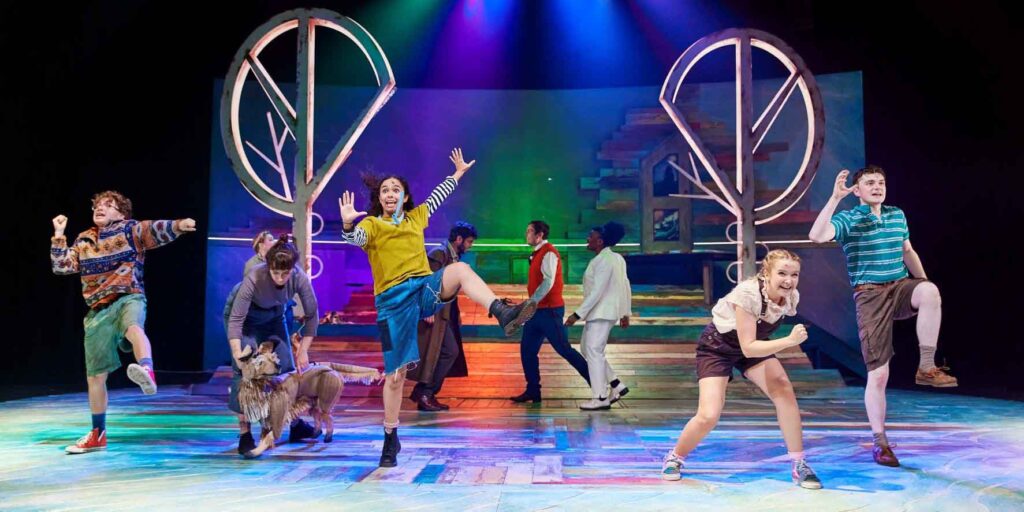 The Famous Five – a new musical

Chichester Festival Theatre’s 60th Anniversary Festival now draws to a close with a new British musical that is based on the books of Enid Blyton and features some of her well-loved characters. Daniel Evans has collaborated on the development of this production with Director Tamara Harvey and both unite again next year when they take up their positions as co-Artistic Directors at the Royal Shakespeare Company.

Enid Blyton began her career as a teacher and went on to become one of the world’s best-selling children’s authors writing hundreds of short stories and over 700 books, one of the most popular being The Famous Five series. This production has remained true to the original characters but reflects contemporary values more appropriate for today, while losing none of the sense of adventure nor Blyton’s proliferate appetite for picnics!

Julian, Anne and Dick have been despatched for the summer to their cousin George’s home in the fictional town of Kirrin. Out in the bay lies a ruined castle on a small island and the four children, together with loyal mongrel Timmy, band together for a daring escapade to save the planet!

Designer Lucy Osborne’s colourful and innovative set is coupled with vibrant visual imagery that works well for the various locations.

Tamara has cast four talented young adults to take the roles of the children, whilst Timmy’s puppeteer Ailsa Dalling is superb ensuring her faithful hound is in fact the hero of the show! Dewi Wykes admirably plays Julian the eldest of the gang, bravely showing no fear but he is somewhat overbearing and domineering. Anne is sensitively played by Isabelle Methven the ‘nice girl’ struggling to make herself heard. A fine performance from Louis Suc as Dick so often overshadowed by his older brother and who is always hungry. His stage presence and enthusiasm shining through. Maria Goodman had the part of feisty tomboy George who is unimpressed by the arrival of her cousins. Headstrong and obstinate, she excelled in some passionate solos but sadly the lyrics were often inaudible as they were drowned by the sheer volume of the music. Sam Harrison brought much comic mileage to his multi roles.

Definitely a family show, nostalgic for the adults but not sure how relevant to children of today, who rely so heavily on digital entertainment rather than the magical world of long-lost childhood freedom and the summers that went on forever, depicted here!

There is plenty of enjoyment to be had in this fantastical adventure of escapism, kindness and a genuine sense of community as the children learn to work as a team, to trust in themselves and where good always triumphs over evil.