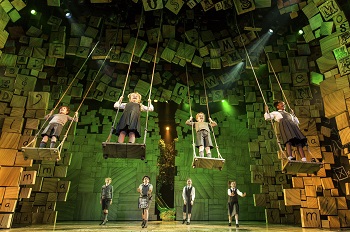 Evie Hone and Lizzie Wells have joined Anna-Louise Knight and Lara McDonnell in the title role.

Recent additions to the adult cast include

Craige Els will continue in the role of Miss Trunchbull.

The young performers who play the roles of Bruce, Lavender, Amanda, Nigel, Eric and the other pupils at Crunchem Hall are as follows:

Matilda The Musical, which celebrates its 4th birthday on Sunday 25 October, is now booking at the Cambridge Theatre until 18 December 2016.

Capturing the imagination of young and old alike, Matilda The Musical has now received 50 awards in Stratford-upon-Avon, London and New York, and has been seen by over three million people worldwide.

Inspired by Roald Dahl’s beloved book, Matilda The Musical premiered at the Royal Shakespeare Company’s The Courtyard Theatre in Stratford-upon-Avon in November 2010, before transferring to London’s West End in October 2011. On 25 October, Matilda The Musical will celebrate its fourth anniversary in London with tickets now on sale until 18 December 2016 at the Cambridge Theatre.

Matilda The Musical is produced in the West End by the Royal Shakespeare Company with André Ptaszynski and Denise Wood as Executive Producers. The production was developed with the support of Company Dramaturg Jeanie O’Hare and the RSC Literary Department.