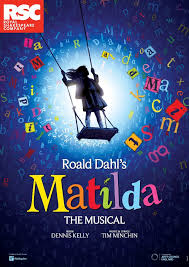 Matilda the Musical is the captivating musical masterpiece from the Royal Shakespeare Company that revels in the anarchy of childhood, the power of imagination and the inspiring story of a girl who dares to change her destiny.

Inspired by the twisted genius of Roald Dahl, with book by Dennis Kelly and original songs by Tim Minchin. Matilda The Musical premiered at the RSC’s The Courtyard Theatre in Stratford-upon-Avon in November 2010, playing to sold-out audiences before transferring to London’s West End. It opened at the Cambridge Theatre in October 2011 and is currently booking until May 2015.

It is written by playwright Dennis Kelly, with music and lyrics by the anarchic Australian comedian, musician and composer Tim Minchin, and direction by Matthew Warchus. The production is designed by Rob Howell, with choreography by Peter Darling, orchestrations additional music and musical supervision by Christopher Nightingale, lighting by Hugh Vanstone, sound by Simon Baker and the special effects and illusions are by Paul Kieve

In March Matilda the Musical celebrated it’s 1000th performance at the Cambridge Theatre, it is not often a musical has been around for so long without me having had the chance to see it however this was one I really wanted to take the children as I had heard so many good reports about it. I was very excited and I hoped that it would live up to my high expectations.

It did. There is a reason why Matilda has so many 5 star reviews and has won so many awards. There is something in this musical for everyone. From an original concept from Roald Dahl we know that the story will be funny, moralistic and uplifting but Dennis Kelly has adapted the story beautifully for the stage and from the very first scene you have taken Matilda to heart. I was familiar with Tim Minchin’s catchy and familiar music before I saw the show and it was really nice to see it in context.

We saw Lollie McKensie as Matilda and all I can say is ‘WOW’! She owned the stage and had just the right amount of charm, grit and determination. She shares the role with 3 other Matildas and it is hard to believe that they are all as incredible as her but apparently they are. But it is not just the Matildas, I hadn’t realised the other children in the cast had such big roles. Each of the children were extremely talented, versatile and were a joy to watch.

I was disappointed not to have seen Alex Gaumond (Legally Blonde, We Will Rock You) as Miss Trunchball, but understudy Antonio Magro was fantastically cruel and vicious as the evil headmistress with just an air of Leonard Rossiter about him. Haley Flaherty was absolutely divine as the gentle teacher Miss Honey, we all want a teacher like her. James Clyde and Kay Murphy as Mr and Mrs Wormwood were hard to hear sometimes but good fun to watch.

I went with a party of 5 adults and 9 children all of varying ages, and all of us were absolutely enchanted…. Well, all but one but then taking hubby to see a children’s musical WAS a recipe for disaster. I would recommend Matilda for people of all ages who want to see an exciting and fun musical . Not one for the serious at heart.

Don’t take my word for it here is what other people said:

To find our what people are saying on twitter:
Tweets about “#matildamusical”

So, pretty conclusive really, the critics liked, it , the twitteratzi likes it and I like it, go and see it, you don’t need to take children, you will enjoy it anyway but hey! Why not?