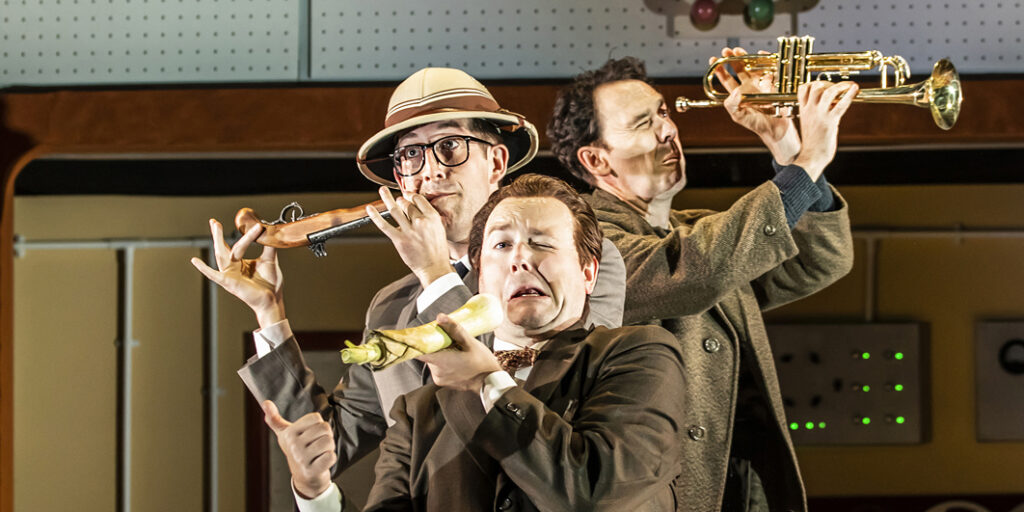 It’s impossible to overstate the popularity of UK radio comedy in the post-war years with many shows having regular listening audiences well into the tens of millions. But while most offerings were standard musical hall and variety fare transferred to the wireless, the arrival in 1951 of a show called Crazy People written by actor, poet and musician Spike Milligan turned things on its head and was way out of left field compared with anything that had come before. A surreal mix of bizarre plots, sublime but ludicrous puns, strange characters and over the top sound effects, it would go on to be one of the most influential shows in the history of comedy. But as Ian Hislop and Nick Newman’s play shows, it had a painful gestation that took its toll on Milligan who suffered a breakdown brought on by clashes with BBC higher ups and the pressure of writing an episode every week.

The play joins the story when the programme has been renamed The Goon Show and is performed by three actors: Milligan, Peter Sellers and Harry Secombe — a fourth actor, Michael Bentine having left after the second series. Milligan the perfectionist is in a constant battle with BBC producers who at the time were mostly Eton educated, officer class types (how things have changed). They simply don’t get it and would sooner not rock the variety boat.

And that’s really about it. It’s an interesting story, but not one that has the legs to fill a two hour running time. Spike’s (Robert Wilfort) clashes with a cartoonishly pompous BBC executive (Robert Mountford) become repetitive, while flashbacks to his war years and two frankly excruciating sequences with pretentious critics feel like padding.

Wilfort is a strong enough central presence as Spike but when he’s driven to the edge of insanity by the pressure of the work that inevitably takes its toll on his marriage to wife June (Ellie Morris) and leads to a violent clash with Sellers (Patrick Warner) I felt little emotional connection.

This is a game and talented cast but there’s little for them to work with — the part of Peter Sellers being particularly underwritten — and the best laughs come from jokes borrowed from the original shows. Jeremy Lloyd as Harry Secombe is the only one who attempts anything like an impersonation of his character and while his laugh and blowing of raspberries becomes irritating (bit like the real thing some might say), he at least manages to find some depth and a shift in tone when he and wife Myra (Tesni Kujore) try to provide support to Spike and his wife. There is also a delightful turn by Margaret Cabourn-Smith as irrepressible sound effects technician Janet.

Hislop and Newman are clearly fans of the Goons and many (including myself) will share their admiration of Milligan and the show. But sadly I feel their tribute falls short.