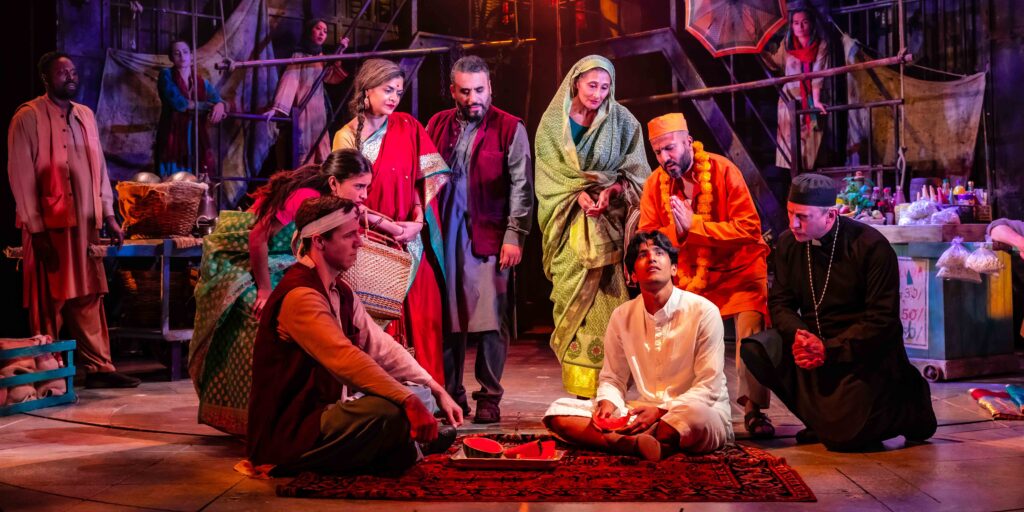 How many accolades can one story have? Yann Martel‘s novel first won the Man Booker Prize, was adapted for the big screen in 2012 winning four Oscars. Then at last year’s Olivier Awards ceremony, Lolita Chakrabarti‘s stage adaptation bagged no less than five statuettes, including best new play! Life of Pi is simply the tale that keeps on winning giving.

Directed by Max Webster, Life of Pi is an epic journey of endurance, survival, strength and courage. 17year old Pi has just spent 227 days adrift on a lifeboat in the Pacific Ocean accompanied by a hyena, a zebra, an orangutan and a 450-pound Royal Bengal tiger! Unbelievable? Then decide for yourself, once you have listened to his story.

The stage show has recently welcomed a new a new cast to continue its run at the Wyndham’s Theatre. Taking the lead role of Pi is Nuwan Hugh Perera, who is no stranger to the role having played Pi twice a week since the show opened in the West End. He excels in the role, bringing the right balance of youthful naivety and strong determination. Onstage throughout the show, he is the storyteller, the protagonist and the hero rolled into one.

The colour and vibrancy of 1970s India is brought to life in the first half of the play. Pi’s home (a zoo) and the local marketplace are where we learn about the political and religious turmoil in India which causes Pi’s family to decide on embark on a new start in Canada. Pi, together with his parents and sister, board the cargo ship Tsimtsam (another amazing set) and set off for a new life, however shortly afterwards, disaster strikes and Pi is left to fend for himself.

The animals throughout the show are a joy to behold. Created by Nick Barnes and Finn Caldwell, they’re expertly brought to life by the cast it is easy to be totally transported into Pi’s world. From the skittish butterflies and graceful turtle to the animals close to Pi’s heart, each are magically presented. Richard Parker the bengal tiger (yes that IS his name) is spectacularly portrayed, ‘driven’ by no less than three puppeteers, his lifelike mannerisms are truly electrifying.

The movie boasts groundbreaking CGI whereas the play goes one better due to Tim Hatley‘s pioneering and innovative set and costume design. Every second there is something to marvel at and are constant surprises. A huge shout out goes to Andrzej Goulding (Video Designer), Tim Lutkin (Lighting Design) and Carolyn Downing (Sound Design) whose combined efforts truly bring the story to life.

Life of Pi has to be seen to be believed. It is a treat for the eyes and brings a warm glow to your heart. It reaffirms that you can do anything you set your mind to, as long as you keep faith and a belief in yourself. Simply put, Life of Pi is the best play I have seen in a very long time and it’s enchantment will stick with me for a very long time. I need to book again soon.

Does it deserve all the accolades? Abso-bloomin-lutely – let the awards shower down.