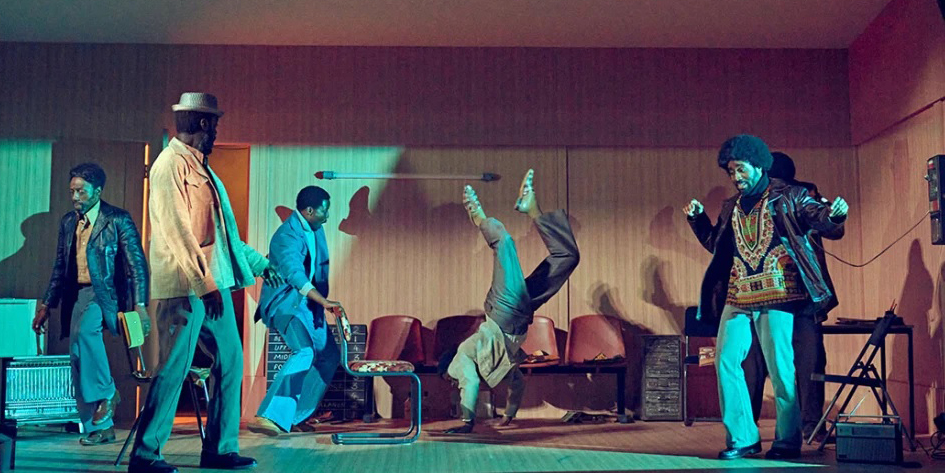 Tinuke Craig’s much vaunted and eagerly awaited celebrated production is one of the highlights of the Connaught’s hugely exciting and varied 2022 programme, which they were justly proud to be showing, coming straight from the Old Vic in London.
‘Jitney’ is American Pittsburgh slang for ‘unlicenced taxi’, and fortunately the Connaught’s handout publicity explained this, also that the play was actually set in 1970s Pittsburgh, the costume, language and attitudes graphically illustrating this.

If you weren’t aware of the first point and not ready for the last you might a) well be slightly bewildered, and b) somewhat unprepared. As for me, not only was I around – and in the US on and off during the’70s – but I well remember the iconic ‘Shaft’ series on TV and this production brilliantly evoked the era with the denim flares, double breasted suede jackets with giant sheepskin lapels, oversized ‘afros’ and belted safari suits. All exquisitely reproduced here. Thank you Alex Lownde!

Not so happy a recollection was the undiluted sexism and machismo demonstrated by many men working in all male environments, shown here with the bragging about sex exploits accompanied by much thrusting of pelvises, gleefully passing around porno mags and generally gabbling on about petty crime and women. Nothing else of note happened in the first act, the waiting became quite an issue for me. I was getting ever so slightly bored with the endless to-ing and fro-in of the garrulous chat, some of which was not helped by the – essential but overblown – vernacular of the time plus occasionally unsatisfactory acoustics.

The set was cleverly done, we felt as though we were actually inside the Jitney crew room, the ‘phone constantly ringing for rides, the door constantly opening and slamming shut with the 8 drivers coming and going was reminiscent of an Alan Ayckbourn piece, and with the actors all seemingly establishing their individual roles before the play could really get going. All credit to each one of them for remaining word and timing perfect managing such a massive amount of dialogue. Incredibly well done.

Wil Johnson as ‘Becker’, the boss, was a brilliant bit of casting, he came across as moody and menacing, definitely not a happy man, and you find out why during the explosive scene in the second act with his newly-released-from-prison son. A scene, although a definitive part of the play, but which just went on for much too long. When the son finally stormed out of the door, every single point had already been raised during their emotional outbursts and the scene should have been over. But no, he came back and it was all repeated, meaning the message was in danger of being unnecessarily overplayed.

For me the character of ‘Fielding’ was wonderfully created by Tony Marshall, regularly swigging from his hip flask in plain view, and very very gradually getting drunk. Not easy for every actor to simulate, but Mr Marshall managed it with a flourish and that tragicomic style of desperately trying to act sober and walk in a straight line, and just not achieving it. Here, too Will Johnson demonstrated both sides of his character when he spontaneously sacked Fielding only to give him a sudden reprieve 5 minutes later.

This play was most definitely a play of two halves. The second act was much calmer and revealed so much more of the men’s back stories, being largely made up of ‘two hander’ scenes. It was a bit of a relief that the shouting, banging and macho fisticuffs were confined to the first act, and the second act opened with a lighthearted exchange between two of the men comparing the ‘looks’ of Lena Horne and Sarah Vaughan, as to who was the most beautiful. Pretty superficial when you think that they were two of the greatest singers of that era, but hey, different times ….

From then on the acting became more intense and the play’s essential themes of social injustice – specifically within the black American populace, poverty and easy violence were brought to the fore within this crucible of a taxi rank crew room. ‘Youngblood’ (played by Solomon Israel) was confronted by his girlfriend Rena (Leanne Henlon) and their ensuing furious clash was wonderfully delivered. Anger and poignancy prevailed in the last hour of the play and it was a welcome relief to have a strong woman’s presence on stage, complete with an amazing afro wig which really deserved a part of its own! How it all came back, all praise to Cynthia De La Rosa and Suzanne Scotcher who created the wigs, hair and make-up.

All in all an interesting and well-produced set piece, but which could have been an hour shorter. And for me, they could have used that hour with more of the fabulous dance and shape throwing sequence by the men – a joy to behold!

There is much to recommend about this acclaimed play and I encourage everyone to see for it for themselves, then come home and try not hear the words ‘Car Service!’ in their ears over and over before dropping off to sleep.