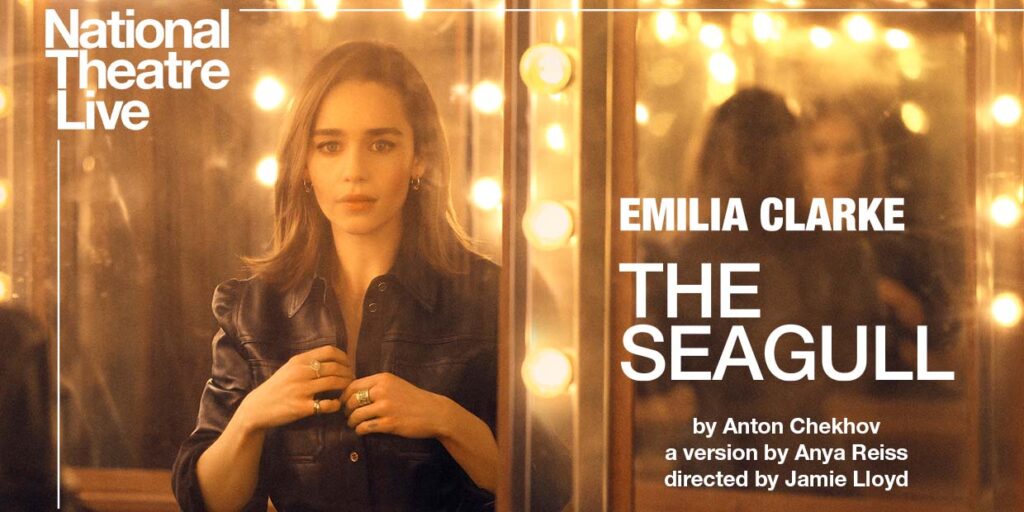 Live Performance in the Heart of Tonbridge

This autumn season the EM Forster Theatre in Tonbrideg has shows to please everyone!

NT Live broadcasts continue with Shakespeare’s romcom Much Ado About Nothing, rollicking comedy Jack Absolute Flies Again and Chekhov’s tale of love and loneliness, The Seagull.

Tonbridge Comedy Nights continue with our monthly nights bringing you the best comedians on the circuit.

Younger audiences can see a bubble extravaganza in The Bubble Show, as well as great theatre with I Spy With My Little Eye and Hulla Balloony Moon Time.

Blackeyed Theatre return to Tonbridge with Sherlock Holmes: The Valley of Fear;

Bromance brings audiences exhilarating physical performance and storytelling and LAMPS are back with their show
Musicality Rocks The Library featuring hits from some of your favourite artists.

They are delighted to have poet, playwright, memoirist performer and broadcaster Lemn Sissay, with them this Autumn. Following last years sell-out Trick or Treat: The Halloween Experience is back for some more spooky fun.

There’s so much this season, why not take a trip to Tonbridge to discover this gem of a theatre.

Katherine Parkinson (The IT Crowd) and John Heffernan (Dracula) lead the cast in Shakespeare’s romcom of sun, sea and mistaken identity.

The legendary family-run Hotel Messina on the Italian Riveria has been visited by artists, celebrities and royalty. But when the owner’s daughter weds a dashing young soldier, not all guests are in the mood for love.
A string of scandalous deceptions soon surround not only the young couple, but also the adamantly single Beatrice and Benedick.

Join Mr. Bubbles with his extraordinary soap bubbles in all shapes and sizes!
The Bubble Show is a unique blend of magic, storytelling, and bubble art! Enjoy bouncy bubbles, bubbles inside bubbles, smoke bubbles, square bubbles, giant bubbles, and even fire bubbles!
Actor, storyteller, and Guinness World Record holder, The Highland Joker, is one of the top bubble artists in the world, bringing you an interactive, fun, international award-winning bubble extravaganza!

Blackeyed Theatre, in association with South Hill Park, return to Tonbridge.
Crammed full of adventure, mystery and of course one or two rather brilliant deductions, The Valley Of Fear is Sir Arthur Conan Doyle’s thrilling final Sherlock Holmes novel brought to life in this spectacular new stage adaptation.
A mysterious, coded message is received, a warning of imminent danger, drawing Sherlock Holmes and the faithful Dr Watson into a tale of intrigue and murder stretching from 221B Baker Street to an ancient moated manor house to the bleak Pennsylvanian Vermissa Valley. Faced with a trail of bewildering clues, Holmes begins to unearth a darker, wider web of corruption, a secret society and the sinister work of one Professor Moriarty.
Original music, stylish theatricality and magical story-telling combine for an unforgettable theatrical experience. The game’s afoot!
“One of the most innovative, audacious companies working in contemporary English Theatre” The Stage

Onstage is a chance to celebrate the very best of our budding Rising Stars and Local Professional Artists through a variety of live Music and Dance.

International award-winning smash hit Bromance is five-star circus about camaraderie and affection.
Audacious, touching, exhilarating tour-de-force of physical heroics where handshakes become handstands and backslaps become backflips.
Among the UKs hottest circus companies Barely Methodical Troupe are at the forefront of a new kind of physical performance, creating highly entertaining shows that mix the show stopping acrobatics of circus with the emotional punch of theatre. Produced by DREAM.

By Richard Bean and Oliver Chris
Based on Richard Brinsley Sheridan’s The Rivals
A rollicking new comedy by Richard Bean and Oliver Chris and a spectacularly entertaining new version of Sheridan’s The Rivals. Starring Caroline Quentin, Laurie Davidson and Natalie Simpson.
After an aerial dog fight, Pilot Officer Jack Absolute flies home to win the heart of his old flame, Lydia Languish. Back on British soil, Jack’s advances soon turn to anarchy when the young heiress demands to be loved on her own, very particular, terms.

This is Lemn’s life story: a story of neglect and determination, misfortune and hope, cruelty and triumph.
He will read from his Sunday Times bestselling memoir, reflecting on a childhood in care, self-expression and Britishness, and in doing so exploring the institutional care system, race, family and the meaning of home.
Infused with all the lyricism and power you would expect from one of the nation’s best-loved poets, this moving, frank and timely event is the result of a life spent asking questions, and a celebration of the redemptive power of creativity.

Molly and Bingo the puppy are having a birthday party and, best of all, you’re invited!
There’ll be a terrific treasure hunt, all your favourite sing-along songs and lots of fantastic games to play, including Molly’s favourite game, I Spy With My Little Eye!
So put on your party clothes and come join us for what promises to be a magical day of fun and laughter.
It’s going to be the best party ever!

A local library is under threat of closure but a mix of characters from the local community come to the rescue. They decide to hold a concert to raise awareness and “Rock” the Library. The question is, can they save it?
From the same team that brought you Musicality and the award winning Musicality Take 2, this will be a must see.
Featuring hit songs from Queen, Alanis Morissette, Tina Turner, Elton John, Sam Cooke, The Beatles, Bon Jovi, The Bangles, Pink Floyd, ABBA & with music from musicals such as, Back to the Future, Rock of Ages, We Will Rock You, Bat Out of Hell and many more. There is something for everyone.
LAMPS will certainly get you Rocking at the Library.

Get the weekend started on a Friday night with brilliant comedy from three of the circuit’s best comedians. This month Andrew Bird headlines. A top headline act up and down the country, Andrew has been tour support for Rhod Gilbert, Rob Brydon Michael McIntyre. Ross Smith, with his personable and relaxed style is support and the brilliant Michael Legge is compere.

After the Sold-Out success of 2021, this spooktacular family show is back!

Expect new spell binding performances, amazing Acrobats, unbelievable UV dancers and Thriller styled vocalists. Everyone will be mesmerised by this showstopper of a performance. This is not to be missed!
Tickets On Sale soon!

By Anton Chekhov, in a version by Anya Reiss
Directed by Jamie Lloyd
Emilia Clarke (Game of Thrones) makes her West End debut in this 21st century retelling of Anton Chekhov’s tale of love and loneliness.
A young woman is desperate for fame and a way out. A young man is pining after the woman of his dreams. A successful writer longs for a sense of achievement. An actress wants to fight the changing of the times. In an isolated home in the countryside, dreams lie in tatters, hopes are dashed, and hearts broken. With nowhere left to turn, the only option is to turn on each other.
Following his critically acclaimed five-star production of Cyrano de Bergerac, Jamie Lloyd brings Anya Reiss’ adaptation of Anton Chekhov’s classic play to stage. Filmed live in London’s West End with a cast including Tom Rhys Harries (White Lines), Daniel Monks (The Normal Heart), Sophie Wu (Fresh Meat) and Indira Varma (Game of Thrones).

Following the fantastic success of previous fundraising evenings including ‘Singalong The Greatest Showman’ and ‘Singalong The Sound of Music’ – now comes Singalong Mamma Mia!
Get ready to sing and dance, laugh, and love with an amazing ensemble cast including Meryl Streep and Colin Firth. Forget the dark nights and the cold of winter…visit the magical Greek island of Kalokairi and sing along to the music based on the songs of ABBA. Be a super trouper and realise your dream to be a dancing queen!
The name of the game is to raise funds for locally based charity, Hospices of Hope.

Three of the best comedians on the circuit visit Tonbridge. This month, the indisputably talented Russell Hicks headlines, with Ignacio Lopez as support act. Michael Fabbri, with his addable and electric style of comedy, is compere. These popular Comedy nights sell out quickly so don’t miss out.

Are you ready? Grab a spoon! Because it’s Pat-a-cake time! Pitter-patter – get the butter! Glitzy-glossy – whisk in sugar! Jokey-yolky – add the eggs!
Long Nose Puppets offer up a marvellous moonlit show full of riotous rhyme, zany puppets and spiffy special cake; all iced with music and songs by Tom Gray. Little children will feel stuffed to the brim with magic.
Hulla Balloony Moon Time is based on the book ‘Pat-a-Cake Baby’ written by Joyce Dunbar and illustrated by Polly Dunbar.

A new show by acclaimed writer, storyteller and performer James Rowland featuring his captivating mix of storytelling, music and comedy.
LEARNING TO FLY sees James tell the story of a remarkable friendship he made when he was a lonely, unhappy teenager with the scary old lady who lived in the spooky house on his street.
It’s about connection, no matter what the obstacles; about love’s eternal struggle with time; about music and its ability to heal. It’s also about her last wish: to get high once before she died.
Uplifting, big hearted and hilarious, this is James’s first new show since his acclaimed Songs of Friendship trilogy.