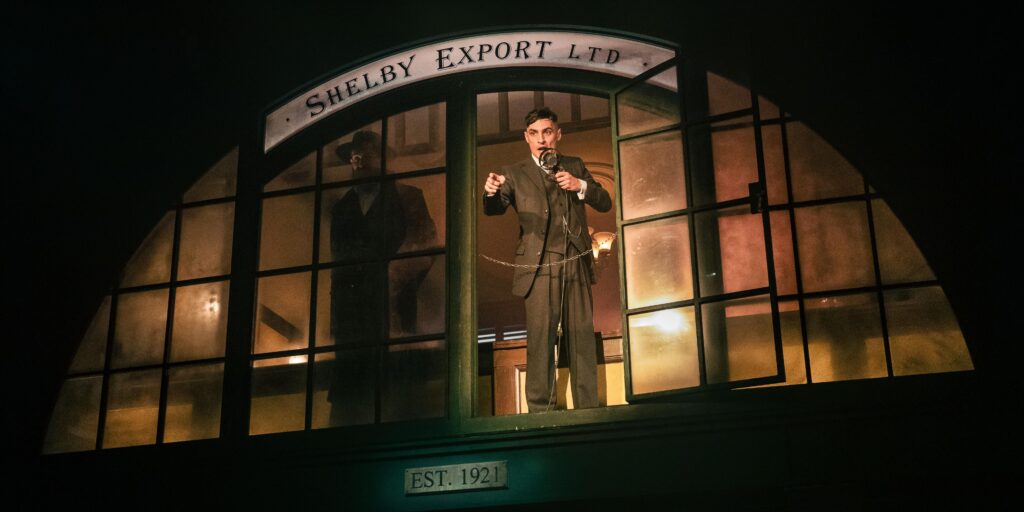 On Wednesday 27th July, I attended Peaky Blinders: The Rise immersive experience at the Camden Garrison, presented in collaboration with Peaky Blinders creator Steven Knight and Caryn Mandabach Productions,  The unique experience blew me away. The exceptionally high standard of the set, the convincing portrayals of the iconic tv characters, and the seamless consumer journey made for a very enjoyable evening.


Since Peaky Blinders first aired in 2013, it has maintained a strong fan base. The concept of a criminal gang tearing up 1900s Birmingham in three piece suits, somehow had 2000s young adults hooked. Being a big fan of the Peaky Blinders TV show myself, and having passed the escalator adverts every day of the past month, I admit I had high expectations for Peaky Blinders: The Rise. It is difficult in the world of immersive to balance being true to the original source material, whilst also creating enough new moments for audiences to feel involved. I was intrigued to see how Peaky Blinders: The Rise would navigate this duality.

The experience was immediately immersive. We were ushered through the entrance by costumed assistants, and greeted by the first character, Alfie Solomons himself. Alfie Solomons is insanely well matched to the TV character, from his beard to his cockney accent, assured me at once that this experience would be of the highest quality. As guests enter, some are pulled to the side and assigned secret tasks adding to the excitement and anticipation. The crowd then feeds through into a wide holding area, a beautiful set peppered with stylised saloon bars, imbedded actors, gearing up the attendees for the performance start.

I am a common user of the phrase jaw-dropping, however I have never meant it as literally as I do in the context of Tommy’s entrance to the show. There was no doubt his introduction would be significant, being the protagonist of the TV show, but the production team outdid themselves with this character reveal. I don’t want to spoil it for future visitors, but know that this was an particularly electrifying highlight of the entire experience.

When the principal actors of the source material are as widely beloved as Tom Hardy and Cillian Murphy are, any imitation of their characters held the potential to be lacking, and twee. Fortunately, this was far from the case, and the actors could not have been more well cast. Tommy Shelby was played by Craig Hamilton, and I couldn’t believe how well he embodied the Birmingham gang leader. His calculated use of gestures and intonation, momentarily convinced me Cillian Murphy was in the room. Alfie Solomons, played by Phil Aizlewood, was also expertly portrayed, with the accent and body language also perfectly aligned. Special mentions also need to go to Roxanne Bartle (Grace) whose singing voice stunned the room to silence, Emma Stansfield (Polly) who beautifully paid tribute Helen McCrory as well working her own magic, and Kieran Mortell (Arthur) whose drunken stupor and bloody moments sold the character.

The flow of the entire show was incredibly smooth. It was very much a ‘pick-your-own-adventure’, except with the added structure of receiving instructions upon entry, and being deliberately ushered into rooms by the actors. This, I felt, gave guests a sense of purpose, and there was no chance of anyone feeling out of place. Each scene flowed naturally into the next, never feeling jumbled or confusing. Even attendees who have never seen Peaky Blinders on TV would still be able to follow storylines, and understand character dynamics easily. Credit to be given to Script Writer Katie Lyons, and Movement Director Charlie Burt, for the show’s absolutely seamless run.

There were a few elements of the performance I did feel lacked in Peaky-authenticity compared to others. Warning: small spoilers ahead. Ada’s speech for workers’ rights, whilst in keeping with the TV show, felt forced. The audience I stood with felt disengaged, and I did begin to search for more exciting happenings in the space. Likewise, there was a dance scene the audience were encouraged to participate in; the actors danced with so much vigour and natural talent, it was personally a challenge as an onlooker to just jump in. Saying that, I’m sure others will have had different experiences, and will find themselves immersed in these particular elements more than myself.

It was evident that the set of Peaky Blinders: The Rise had been created with care and attention. It features several original items from the television series including the safe, The Garrison Bar sign, Polly’s office furniture and more. The saloon stalls were beautifully done, to the extent where it was impossible to determine which elements were permanent to Camden Garrison, and which were temporary for the show. The office areas were detailed down to the receipts and letterheads on the desks, and could’ve easily been mistaken for movie sets. Huge appreciation to Creative Director Tom Maller and set and costume designer Rebecca Brower for bringing the Peaky Blinders vision to life for us to enjoy.

In conclusion, Peaky Blinders: The Rise was an incredible production, and for big fans of the TV show, it is an absolute must-see. The actors were superb, the set was stunning, and the entire experience very absorbing. A wonderful evening, and a ton of fun! By Order of the Peaky Blinders – buy your tickets now!