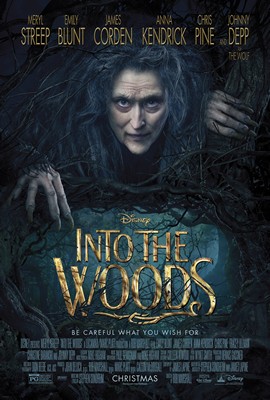 I have been a huge fan of Stephen Sondheim since I saw the original London production of ‘Into the Woods’ in 1990. After seeing and loving many of his other shows Stephen Sondheim remains my favourite composer and Into the Woods my favourite show of his. Therefore you can imagine how thrilled I was to be invited by Disney and Laughing Buddha to see a preview of the film version this week, a couple of days before it’s general release on Friday 9th January.

Into the Woods opened on Christmas Day in the United States. It has already become the highest grossing adaptation of a stage musical of all time beating both Mamma Mia and Les Miserables. It has been nominated for three Golden Globes. Would it live up to my very high expectations?

Into the Woods is a retelling of many favourite fairy tales such as Cinderella, Red Riding Hood and Jack and the Beanstalk whilst adding a few new characters along the way.

Among the new characters are a baker (James Corden) and his wife (Emily Blunt) who are desperate to have a child. One day (as does happen in a fairy tale land) the neighbourhood witch pops by and explains about a spell that she put on the baker’s family years before. The curse ensures that his family tree would always be barren. She then offers them a get-out clause, the Baker and his wife must go into the Woods and bring back ingredients she requires to break a spell. In return for this, she promises that the couple will be able to have their longed-for child.

It so happens that all the cast have a reason to go ‘Into the Woods’ and it is there they meet, interact and the fairytale mash up begins.

Together with Corden and Blunt, other familiar British faces litter the film, including Tracey Ullman (Jack’s Mother), Frances De La Tour (the Giantess) and even a cameo of the wonderful Joanna Riding as Cinderella’s Mother.

Although Johnny Depp is high on the billing, don’t make him your primary reason for going to see ‘Into the Woods’ Although his heinous devouring ‘Wolf’ is rather delicious and I must admit that I too would probably be tempted to ‘stray from the path’, Depp is only on screen for about 15mins. In the stage version the actor playing the wolf often doubles up as Cinderella’s Prince. Here, the Prince is played by Chris Pine and his camped up duet ‘Agony’ with Rapunzel’s Prince Billy Magnussen remains one of the highlights.

If the cast wasn’t perfect enough. The part of the witch is portrayed by non-other than THE Meryl Streep. Having proved her singing talent in Mamma Mia, she adds yet another string to her bow showing yet again her wonderful versatility.

Although ‘Into the Woods is humorous it also can be ominously dark. Under Rob Marshell’s direction, together with the blessing of Stephen Sondheim and writer James Lapine themselves the movie does play things fairly safe guaranteeing it’s appeal to a wide audience and suitable Disney’s family-friendly ethos.

Despite being a hardened Sondheim purist I understand that compromises have had to be made to bring this marvellous musical to the big screen. More narration has been added to explain the scenes and songs that have been cut but on the plus side, the setting is enchanting, it is great to see the ‘Woods’ with all it’s natural beauty and pitfalls not to mention a ‘real’ giantess!

You need to do two things when working on a movie adaptation of a musical. You have to retain the central important core of the piece, hold on to what makes it great but at the same time you must re-imagine it as a film

I believe that this was achieved with Into the Woods. A fabulous movie of a fabulous show.

‘Into the Woods’ opens for general release in the United Kingdom on Friday 9th January.

One thought on “Into the Woods | Movie | Review”