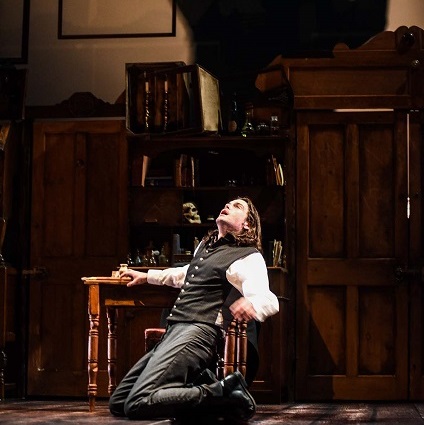 “For how do you tell a butterfly he must return to the chrysalis?”

Blackeyed Theatre Company’s latest production plunges straight into the human mind in its darkest condition. Following their last tour of Frankenstein, this autumn they bring to life Robert Louis Stevenson’s classic thriller The Strange Case of Dr Jekyll & Mr Hyde. In the programme Producer Adrian McDougall says “you could be forgiven for thinking we’re morphing into the Gothic Horror Theatre Company”. It certainly feels that way, especially with Sherlock Holmes announced for 2018.

Although the company boast 14 years of experience with a new production every year, for me they have really found their element and flourish within this particular genre. As soon as I entered the auditorium I was taken aback by the simple yet beautifully detailed Victorian set. An eerie piano could be heard as they set the scene for the audience, creating an immersive atmosphere before the show had even begun. 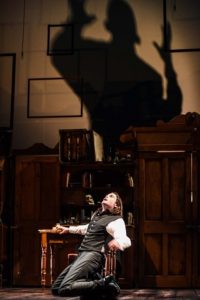 As the lights fade we are drawn into this gothic world of sinister shadows, and the four strong cast members introduce their main characters. As Dr Henry Jekyll introduces himself he is haunted by whispers of Edward Hyde, the harder he tries to focus the louder they become, foreshadowing the corruption of his mind and the torment that is yet to come.

Before the show I considered the two main challenges of this story; one was how a single actor would play a character with two so separately distinct personalities, and the second was where Stevenson’s original novel has such a large plot twist with the revelation that Jekyll & Hyde are the same person, I wondered how the company would deliver that to a contemporary audience, who most likely know the story well already, and manage to keep them in suspense.

Suffice to say my thoughts were put aside fairly quickly as Jack Bennell plays the lead terrifically. With his large stature he dominates the stage both as the frail deranged scientist Henry Jekyll and as the twisted loud and barbaric Edward Hyde. As for the story, it is so rich and full of detail, watching the disintegration of Jekyll’s mind is gripping but also how that affects the characters around him, such as his best friend, his secret love affair and his lawyer. This exploration of the human psyche and its limits is fascinating. While one personality is morally correct and the other barbaric, both have their advantages and raise their own valid points about society.

As Writer and Director, Nick Lane has done a superb job of adapting a timeless classic for the big stage, and having already adapted this novel twice before, it was rightfully entrusted to him, as he gives the story a fresh approach. So much of what unravels in the script, set in 1894-97, is still so relevant to today, and in the end much like the characters, the audience are left with the legacy of Dr Jekyll and Hyde. It is thought provoking, imaginative and leaves you wanting the story to continue beyond the realms of Robert Louis Stevenson’s writing.

Don’t be caught in two minds about seeing this gripping and imaginative adaptation. 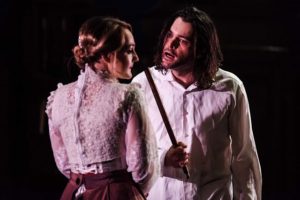 Touring throughout autumn 2017 to spring 2018, for more information visit: