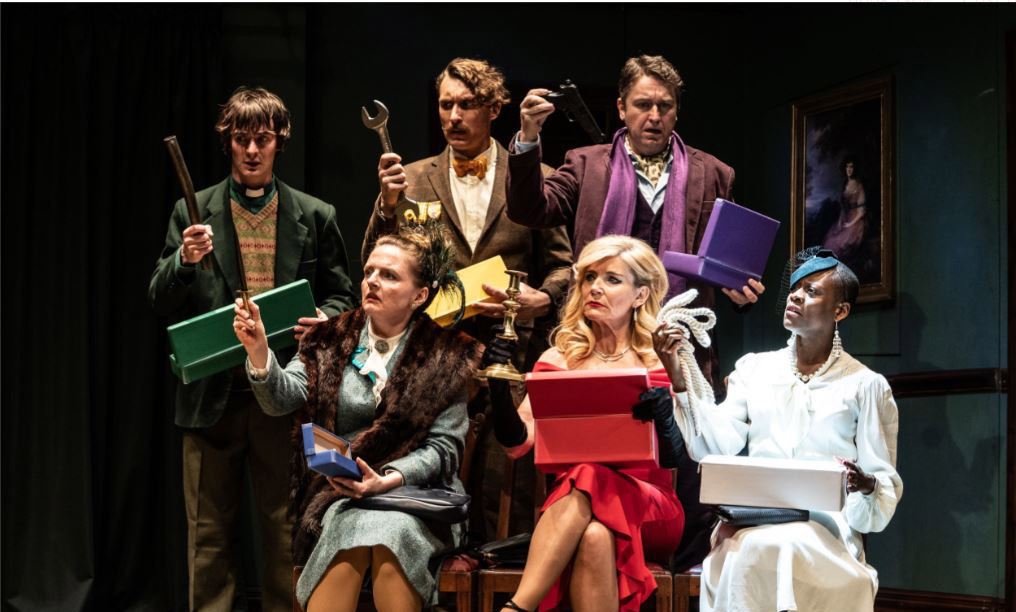 Based on the film Clue and classic board game, Cluedo is a brand-new comedy thriller. The much loved game was invented during WWII by a British musician, fire warden and munitions factory worker called Anthony Pratt in his home in Birmingham. Pratt died in 1994 at the ripe old age of 90 which is probably just as well as he would surely be completely bewildered had he been in the first night audience at the Theatre Royal in Brighton.

When Miss Scarlett, Professor Plum, Mrs Peacock, Reverend Green, Mrs. White and Colonel Mustard arrive at a party, they are surprised to find they have all received the same invitation from Lord Boddy. It soon becomes clear that they all have secrets and the mystery and hysteria grow when the inhabitants of Boddy Manor are killed off with a variety of familiar weapons.

Add to this, the director of the hugely over-rated The Play That Goes Wrong and a cast that includes well known actors ‘off the telly’ and you surely have all the ingredients for a hit show. The first and main problem is the script is truly awful. ‘Is there a bathroom nearby?’ asks Mrs Peacock or words to that effect. “Oui, Oui” replies Yvette in a cod French accent that wouldn’t be out of place in an episode of ‘Allo ‘Allo! “No, I just want to powder my nose!” is the ‘hilarious’ punchline. Say no more!

At one point during the show, one of the actors (Harry Bradley) announces to the rest of the cast, “You’re all acting very peculiar!” I couldn’t have put it better myself! With a plethora of doors, moments of physical comedy and horribly contrived split second timing, this is supposed to resemble a farce, however, several members of the cast seem to forget their characters have to remain plausible. Michelle Collins plays Miss Scarlet like a character out of Eastenders as she plays opposite the character of Mrs Peacock (played admirably by Judith Amsenga). Of the rest of the cast, only Tom Babbage as Reverend Green seems to understand the rules of farce and his performance alone rescues a dire production.

We even have to sit through the obligatory cod corpse when the policeman’s moustache ‘accidentally’ falls off. This kind of comedy only works if the actors involved are skilled enough to pull it off (no pun intended) and convince the audience it has never happened before – in this case, neither were.

Elsewhere, there is a set that has seen better days and a selection of costumes and wigs that look like they were heaped together in a sack.

I recently raved about a production of Wuthering Heights at the same venue and bemoaned how audiences have become accepting of so much mediocre theatre. Unfortunately, this production doesn’t even meet that description. Would a better cast or a different director improve matters? There are some things you just can’t polish.