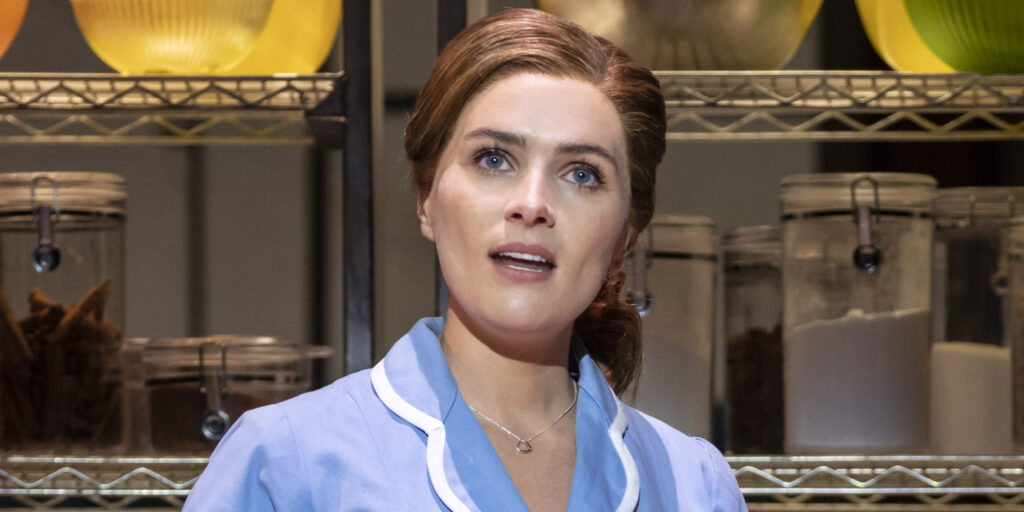 Chelsea Halfpenny is currently playing the lead role of Jenna in the national tour of Waitress the musical.

We know you well from your time on Emmerdale and Casualty, what made you want to move into theatre work as well? Are there any big differences between the two styles of work?

It wasn’t a conscious move into musical theatre, I was lucky enough to be seen for a couple of musicals and I’ve always sung. I had been for a few auditions here and there which didn’t go that well and then I just happened to get the audition for 9 to 5 The Musical and the stars sort of aligned and it went my way. I ended up doing that show from 2019 until March 2020 and once that door was open to me in this industry, I was able to be seen for more musical theatre. The biggest difference between the two is the hours! You go to bed late and you get up late as we work mainly in the evening. It’s also physically a lot more demanding – if you have a cold or your voice isn’t quite there because you’re run down you do have to take sick days which when you’re doing television doesn’t happen so much. There’s also the thrill of having a live audience and getting that instant feedback which is amazing.

In terms of keeping up the stamina, you really do have to look after yourself and think about what you’re eating and how much you’re chatting. I definitely don’t really drink alcohol when I’m doing theatre because it makes me very talkative and talking a bit louder which isn’t super helpful! You just have to be conscious of what you’re putting in your body and also where you are expending your energy to make sure you can deliver a great performance every night.

Waitress is a show that is so loved by fans, were you a fan of the show prior to joining it?

I was a huge fan, a really geeky fan of the show and I am not ashamed to say that at all. I really loved it so now getting to be part of it is a total dream come true!

Can you explain a little about the story, and the journey your character, Jenna, goes on?

The story is about Jenna who is an expert pie baker and works in a diner. She has two great friends, Becky and Dawn, who work there with her. We discover quite quickly that she is quite unhappy in her marriage, and she bakes all her emotions into her pies, that is how she expresses herself. Then a new Doctor comes to town and he changes her perspective on things. The story unfolds from there! It’s all about love and finding love in the places that you might not expect to.

The music in the show has taken on a life of its own, with some numbers quickly becoming firm favourites for people. Why do you think this is, and do you have a particular favourite number to watch or perform?

I think the main reason is that Sara Bareilles seems to write literally from her heart. She writes things that are so specific but at the same time you can take what you want from it as well. The songs tell the exact story of Waitress beautifully, but also you can relate everything that she has written to your own life for loads of different reasons. Even the funny songs have really heartfelt serious moments to them, and layers to them that you can discover each time you listen to the songs. They take on another life with each listen.

I know that She Used To Be Mine is such a firm favourite for people, and it gets sung a lot. I can see why; the lyrics are just so heart wrenching and the music is beautiful. I also love Dawn’s song When He Sees Me, that’s one that seems funny but it’s actually really emotional.

What’s it like touring the UK with a show, does it differ to your experience of performing in the West End?

The logistics are a bit different, with packing up your bag and your dressing room every week and in a way it goes by so quickly as you’re so busy. It’s lovely to have a different audience each week in every town and city we visit as everywhere has its own vibe. We can feel the emotions of the audience in different parts of the show.

And finally, is there a piece of advice you have received or that you would pass on to anyone hoping to go into performing in some way?

This is easier said than done, but always believe in yourself and give yourself a goal. It’s really easy to take on any negative feedback and dwell on it but just remember that it’s someone else’s opinion and to keep working at your dreams!