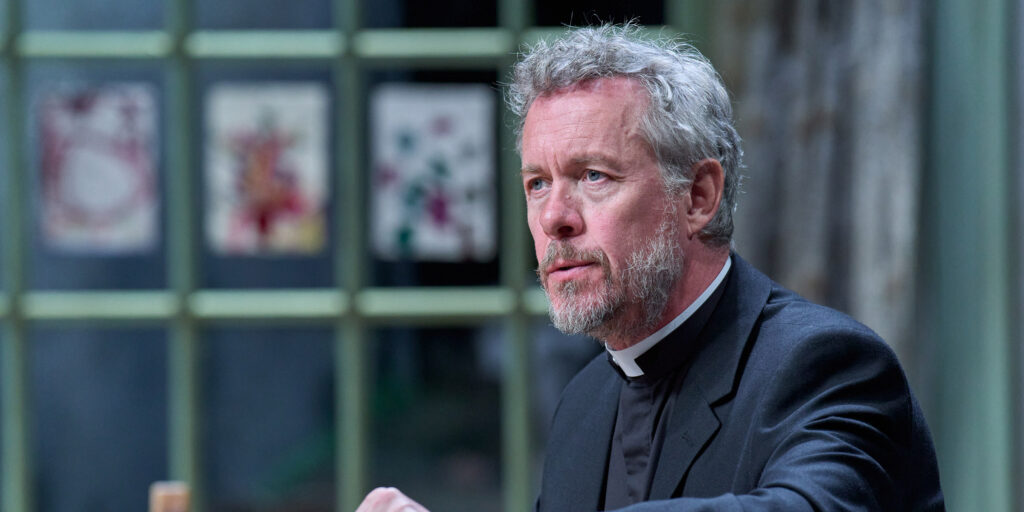 Co-produced with the Bridge Theatre and originally scheduled for 2020 this new play by Stephen Beresford ~ The Southbury Child has its world premiere in Chichester followed by a two month run at the Bridge Theatre London.  Reuniting director Nicholas Hytner and triple Olivier award-winning actor Alex Jennings the pair return to Chichester after 37 years when they worked together on The Scarlet Pimpernel in 1985!

This compelling, dark comedy is unusual in its quest to highlight faith and tradition in our rapidly changing society where attitudes to Christianity are often deeply opposed.  Rural Vicar David Highland has endeavoured to guide his parish through a combination of charm, sincerity and an astute wit, though frequently inebriated in the process.  His troubled home life only adds to the burden he carries.  However, his strong principles of right and wrong force him to take a hard line when one of his parishioners asks for a Disney style funeral for her deceased young daughter, complete with balloons.  His unwavering stance alienates him from not only his family but also his flock and threatens to destroy everything he stands for.

Director Nicholas Hytner brings together a strong cast, headed by Alex Jennings who is immensely watchable as engaging David Highland, grappling with a high level of hostility, verbal abuse and the wish to give the people what they need rather than what they want.  He totally inhabits the character, holding you captive from the beginning and gives piercing insight into the complexities of his emotions.  An utterly realistic and gripping performance.  Josh Finan brilliantly portrays Lee Southbury with his menacing, colourful language and sharp observational quips that keep the audience laughing.  Rachel Ofori gives a refreshing and entertaining portrayal of David’s adopted daughter Naomi, while Jo Herbert excels as his down-trodden school teacher daughter Susannah and her strangled feelings.  Outstanding performances too from Phoebe Nicholls (Mary Highland) David’s long-suffering dispirited wife and Sarah Twomey the outspoken grieving mother Tina Southbury.  Not forgetting Jack Greenlees playing the young verger Craig Collier, a reformed alcoholic and self-confessed outsider.

This modern play is a superb look at the Church of England as it is today, a production full of compassion, honesty, the reality of being available 24/7 and the associated casualties it is likely to cause along the way in the form of extra marital affairs, alcoholism and a depressed dysfunctional family!