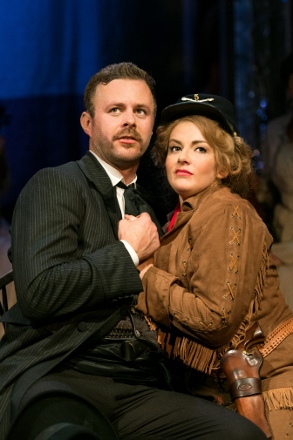 I had been looking forward to Calamity Jane since the announcement that it would be coming to The Hawth at Crawley. It is one of those iconic classic MGM musicals of the 1950s which everyone seems to know well.

However as I sat in the auditorium waiting for the show to start I did begin to doubt my knowledge of musical theatre and wondered whether the tunes I had been humming came from Calamity Jane, Annie Get Your Gun, Oklahoma or Seven Brides for Seven Brothers.

The fact is; the Wild West has always fascinated us hence the proliferation of musicals, Calamity Jane has more appeal than most as it is based on a true character albeit not a true story.

And yes… it does have a lot of appeal – Sammy Fain and Paul Francis Webster’s score has been given a lift by the marvellous musical director Catherine Jayes (Merrily We Roll Along was my favourite show of last year) The songs were as familiar as ever, Secret Love, Deadwood Stage, Windy City but given more energy, that coupled with Nick Winston’s brilliant choreography it was a good job I wasn’t sitting on an aisle seat. I would have been up dancing a hoe down with them.

But what really amazed me and what I wasn’t prepared for, was that there was NO orchestra! The supporting cast are extremely versatile not only do they sing and dance but they all are accomplished musicians and play all the instruments on stage as well (like Once the Musical). It gave the production a lovely homely feel.

I interviewed Jodie Prenger (Oliver, Spamalot) in the run-up to the opening in Crawley and she was so obviously enamoured by the show and having a lot of fun. This comes across in Calamity Jane. She makes a fabulous Calamity; feisty, spirited with a great degree of determination. Not at all like the demure Doris Day – she is a lot more believable as the character of Calamity Jane.

Another delight was Tom Lister (Water Babies, ITV’s Emmerdale). Even though Jodie told me in her interview that he was amazing, who’d have thought ‘that guy from Emmerdale’ could sing, dance, play instruments and quite frankly, look as good as he does. He makes the perfect Wild Bill Hickok. Yes, Jodie was absolutely right, he is an amazing find for musical theatre, I really hope we’ll see a lot more of him.

I did like the second act better than the first, this was once I had got used to the characters and the American drawl. The arrival of Katie Brown, Phoebe Street (Les Miserables, The Light Princess) certainly brought gentility to the show and although I would have liked to have seen him do more, Alex Hammond (Seven Brides for Seven Brothers,Taboo) was charming as Calamity and Katie’s love interest Danny Gilmartin.

Directed by Nikolai Foster, Calamity Jane is a full-filled production, yes the story is weak but it is made up for by the energy and vigour of the cast, the memorable songs and the nostalgic feeling that all musicals really should send you home smiling, humming the songs and wishing you could see it again.

I would recommend Calamity Jane for all the family. Catch it at the Hawth or on tour while you can.

Calamity Jane is at the Hawth:

Calamity Jane can outrun and outshoot any man in Deadwood. Hard, boastful and desperate to impress, she travels to Chicago on the Deadwood Stage to recruit a star, Adelaid Adams. But things don’t go too smoothly for Calamity, as everyone in town favours the new girl and she struggles to keep her jealousy and pride in check. It takes her long standing enemy Wild Bill Hickok to make her see sense, and realise her Secret Love…

With an Oscar nominated score that includes The Black Hills of Dakota, The Deadwood Stage (Whip-Crack-Away), Just Blew in from the Windy City and the Award winning song Secret Love, don’t miss this new production that blows into your city for one week only.