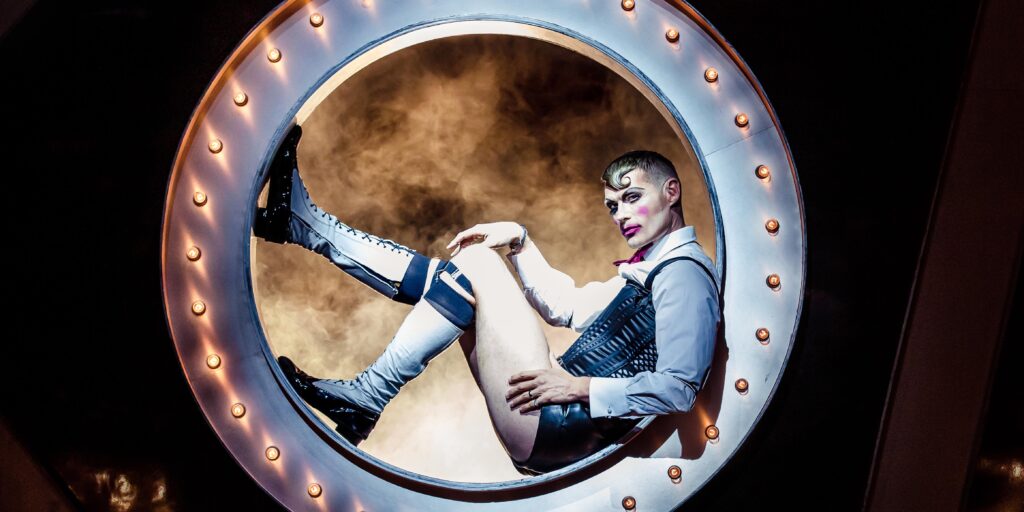 Cabaret is synonymous with world-known actors including Jill Hayworth, Liza Minnelli and Joel Grey playing the key roles in either the on stage or on film, the latest touring version of Kander and Ebb’s Cabaret does not disappoint in terms of superb acting. With John Partridge opening the show through the lens of the narrator and Kit Kat Klub compere, Emcee, the story unfolds into the lives of three main characters and the effect on them of the 1930’s violating Nazi takeover.

Having recently played the role in the 2017 tour Charles Hagerty plays Cliff Bradshaw an unsuccessful writer who through an encounter at a train station with Ernest Ludwig (Nick Tizzard) is introduced to not only the Kit Kat Klub leading lady Sally Bowles (Kara Lily Hayworth) but also his new landlady Fraulein Schneider (Anita Harris). As Cliff seeks inspiration in his writing, the nightclub life of “anything goes” introduces him to homosexuality transvestites and orgies, but it is Sally who catches his heart. Between the forming relationships of Sally and Cliff and Fraulein Schneider and Herr Schultz (James Paterson) the remaining cast perform dances representing the sexual nature of the Klub and the time. As these storylines develop the looming impact of the Nazi invasion affects all, and Emcee, who continues to entertain, skilfully changes the mood to reflect the inevitable helplessness and dark nature of the Nazi regime in the second act.

The audience are taken on an emotional journey as this is a powerfully played production with the entire cast committed to their part in representing Rufus Norris’ direction of Joe Masteroff’s original.

With familiar songs including “Money, Money”, “Tomorrow belongs to me” and of course “Cabaret” this is an amazing, entertaining and moving production of Cabaret. It can be seen at The Hawth, Crawley until Saturday 21st September before continuing its national tour.

One thought on “Cabaret | Tour | Review”