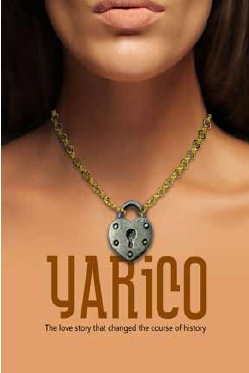 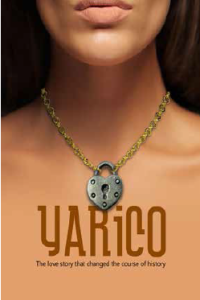 I was delighted to be invited to go to the London Theatre Workshop last night on behalf of Downstage Centre (have you visited their snazzy new website yet?) to see the world premiere of Yarico a new musical written by Carl Miller and produced by Jodie Kidd.

The play is loosely based on a factual story set in the Antilles in the early 1700s. Yarico (Liberty Buckland) is a feisty independent Amerindian woman who was taught to speak and read English by a previous English visitor to her island. Yarico in turn now tells Shakespeare’s tales to the other villagers while dreaming of a more exciting life. Her best friend and confidant, Nono (Tori Allen-Martin), advises her to be more content with her current situation.

When Thomas Inkle (Alex Spinney) is shipwrecked on the island together with his friend Cicero (Jean-Luke Worrell), Yarico saves Thomas from not only his injuries but defends him from the mistrusting villagers and predictably falls in love with him. Less predictably Nono falls for Cicero and although their union is comically portrayed and was highly entertaining, it did make me feel that women on their island must have been a little sex-starved and didn’t take love too seriously.

There were points in the first act where the story reminds me a little too much of the Disney version of Pocahontas and I did wonder if this tale was heading in the same direction. However, the story picks up pace once the star-crossed newly-weds set sail for their new life. Of course, things don’t go to plan.

The play improved tenfold as it progressed. Liberty Buckland’s portrayal of Yarico is splendid, she is able to give the brave passionate heroine a gentle vulnerable quality and her singing voice was beautiful. Alex Spinney also is admirable as the hapless hero, yet the story doesn’t give the audience much time to like him or feel any sympathy for him no matter how tender he seems at first. There are many other outstanding performances from many of the eleven-part strong cast, in particular Tori Allen-Martin (Nono) and Charlotte E Hamblin who plays the odious Lady Worthy.

The Music and Lyrics by James McConnel and Paul Leigh are commendable as many of the songs stand out. The songs in the second act were more memorable especially the inspirational ‘The Things We Carry With Us’ sung by Ma Cuffe (Melanie Marshall), the satirical ‘Chocolate’ and the rousing finale song ‘Spirit Eternal’. Hopefully there will be a cast album so that we can become more familiar with the intriguing score.

There is no doubt that Yarico is an important story to be told. It is a story of love, betrayal, culture, class, slavery and a fight for freedom. It supposedly inspired a social movement against the slave trade through its popularity. Carl Miller’s adaptation of the story is the first step to making Yarico’s voice heard once more. I do think some of it needs to be fine-tuned, particularly the first act, but on-the-whole director Emily Gray has created a solid production with a great cast, and I am sure that we will see and hear more of Yarico.

All photographs copyright of Honeybunn Photography

If I had one major grumble it was absolutely nothing to do with the production or venue but an inconsiderate audience member who consistently looked at her phone during the production and at one point decided to take a photo WITH FLASH of the production. If that wasn’t bad enough, this was press night! The cast were probably nervous, the audience trying to concentrate and it didn’t help with the small space of the London Theatre Workshop being lit up periodically. Please remember even if it is on your knee a phone creates an extremely distracting light. SWITCH IT OFF!