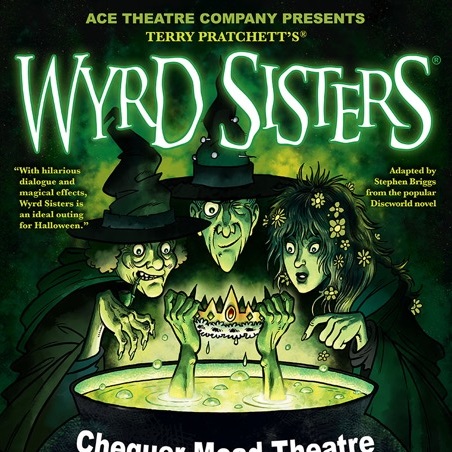 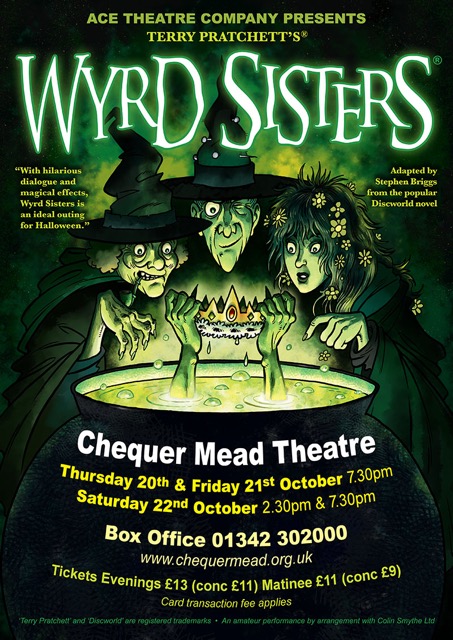 The Ace Theatre Company brought Terry Pratchett’s Discworld to life at Chequer Mead theatre this week with their production of Wyrd Sisters.
The play, based on Pratchett’s sixth fantasy novel, features his strange and magical world – oddly reminiscent of Earth viewed through a distorting mirror –  which is supported by four elephants standing on the shell of a giant celestial turtle.
Like all Pratchett’s work it relies on clever word play, and features a story which borrows heavily from Shakespeare – notably Hamlet and King Lear – while neatly weaving in references to other stories including Cinderella and Sleeping Beauty.
The opening sees the eponymous Wyrd Sisters – or witches – gathered on a blasted heath, coordinating their diaries in a bid to answer Shakespeare’s eternal question “When shall we three meet again?” only to find themselves suddenly responsible for a baby prince, orphaned by the murder of his father, King Verence.
To keep him safe they entrust the royal infant to the care of a group of travelling theatricals and conceal his crown in a props box, as they endeavour to work their magic against his regicide relatives.
Joy Buchan was excellent as head crone Granny Weatherwax, whose straight-talking cut through magical convention with a large dollop of common sense and a blithe disregard for any “rules” regarding the practice of magic: while Chrissie White showed great comic timing as her more dithery sidekick, Nanny Ogg.
Laura Basemezer, as eager coven newbie Magrat Garlick, was delightful in her role as a naïve newcomer to arts which were not nearly as dark as they had been painted, and Matthew Thomas as her love interest The Fool put in a performance which was as funny as it was endearing.
David Plank as the treacherous Lord Felmet was evil, comic and pathetic by turns, and almost deserved being married to his ghastly wife, ably played by Lisa Frazer.
Staged throughout in a series of vignettes, and without the benefit of scenery, this production could have lagged, but it bowled along with enjoyable pace and some genuinely laugh-out-loud moments when the minimalistic props such as the horse and cart were brought into play.
A real ensemble piece which saw the large supporting cast take on several roles, there were also nicely judged performances from Joshua Plank, playing the deposed Prince-cum-actor Tomjon, Steve Gray as the Ghostly King Verence and a short, but excellent excerpt from Kieran Gladman playing the role of The Queen in the play-within-a-play.
As in all fairy tales everything ended happily ever after for everyone who deserved it…so not the Felmets then.
And if, as it turned out, neither Tomjon nor his half brother The Fool were actually the late king’s sons after all, no-one but the witches was any the wiser.
As Granny Weatherwax so wisely remarked of the newly-crowned Fool  “Royalty has to start somewhere – so why not with him?”
Reviewer : Geraldine Durrant

Wyrd Sisters is being performed by the Ace Theatre Company at Chequer Mead, east Grinstead until 22nd October 2016