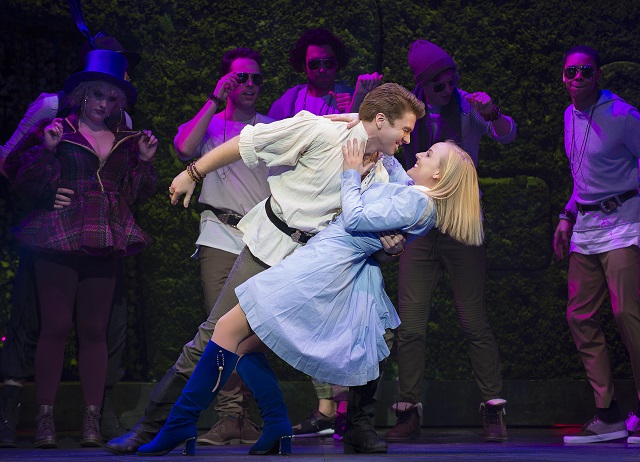 The world of Lewis Carroll is famously bizarre, his imagination has thrilled readers for generations. He wrote of fairies, imaginary worlds and talking creatures, but by far his most evocative stories have to be The Adventures of Alice in Wonderland and Alice Through the Looking Glass. Supposedly written about the young daughter of a colleague at Oxford, little Alice’s adventures captured the imagination of the world.

Wonderland is a new musical re-telling of the stories written by Gregory Boyd and Jack Murphy and is currently on Nationwide tour.

In this version, Alice is portrayed very differently. Here Alice played by West End sweetheart Kerry Ellis, is a forty-year-old single mother, down on her luck and frustrated and angry with what life is throwing at her. She longs to escape and be somewhere different. She follows a talking white rabbit and ends up in Wonderland along with her daughter Ellie (Naomi Morris) and gawky neighbour Jack (Stephen Webb) and they all embark on a journey of self-discovery.

The traditional characters from Carroll’s books are all there. The white rabbit is played by Dave Willetts who has a list of theatre credits as long as his rabbit’s ears and the tyrannical red queen with a passion for jam tarts is sensationally played by Wendi Peters. The smooth-talking caterpillar (Kayi Ushe) who asks all the right questions but gives no direct answers, the mischievous Cheshire cat (Dominic Owen) and the crazy Mad Hatter (Natalie McQueen) and her friends.

Alice and her companions discover who they really are and in doing so try and make Wonderland a better place. A perfect fairy-tale.

The songs written by Frank Wildhorn and Jack Murphy were quirky, tuneful and superbly sung. Everyone in the cast had incredible vocals. Kerry Ellis didn’t disappoint at all, Dave Willetts was sublime and Wendi Peters stole the show every time she stepped on stage as the Queen and richly deserved more stage time.

Personally, I felt the second act far exceeded the first, it was less frenetic, the characters, at first mildly annoying were now more developed and the songs much more powerful.

Wonderland is flamboyantly bonkers, visually stunning and very entertaining although I struggled to see what audience the show was written for, it seemed too grown up for children and yet quite childish and chaotic for adults.  I loved it but do wonder whether Wonderland will appeal to everyone or will it just miss the mark?

Wonderland is playing at the Theatre Royal in Brighton until Saturday 3rd June and then continues on its Nationwide tour.