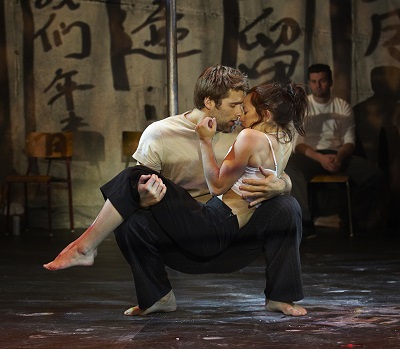 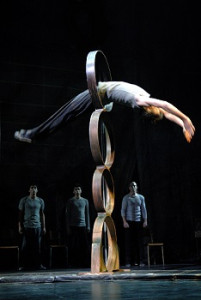 Hailing from Québec, renowned as the home of the modern circus discipline, The 7 Fingers (Les 7 Doigts de la Main) is one of the world’s most inventive contemporary circus companies. After success with its previous show Sequence 8, the company returns to the Peacock Theatre with the critically acclaimed TRACES from Tuesday 9 June – Sunday 12 July 2015.

In TRACES, the cast combines traditional acrobatic forms with street elements, mixed with theatre and contemporary dance. The show takes place in a make-shift shelter, an unknown catastrophe waiting outside the doors of tarp and gaffer tape. In the face of an impending disaster they have determined that creation is the only antidote to destruction. Performance skills include tumbling through hoops, scaling Chinese poles and balancing seemingly effortlessly on each others’ heads, to basketball, skateboarding and playing classical piano. In a poetic, humorous and thoughtful form, and with the use of film clips, narration and a range of music from rock ‘n’ roll to blues and hip hop, TRACES redefines the art of circus.

First performed in 2006, TRACES has gone on to be performed over 1700 times in 23 countries. The show has featured as a part of The Royal Variety Performance, played at the Union Square Theater in New York for a year and has won multiple awards.

Founded in Montreal in 2002, The 7 Fingers began as artists on stage and soon branched out, expanding their creative talents as directors, choreographers, writers and coaches, passing on their collaborative and unique 7 Fingers process to a new generation of circus artists. The company name Les 7 Doigts de la Main, translates to the 7 Fingers of the Hand – a twist on a French idiom the five fingers of the hand used to describe distinct parts united tightly, moving in coordination towards one common goal. For the company, it refers to their 7 founding directors, Isabelle Chassé, Shana Carroll, Patrick Léonard, Faon Shane, Gypsy Snider, Sébastien Soldevila and Samuel Tétreault who, by combining their distinct talents and experiences, work towards their common artistic goals with the beautifully awkward dexterity of a 7-fingered hand. 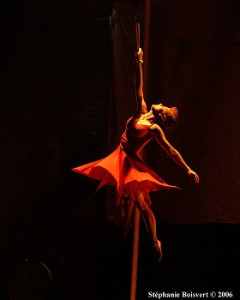