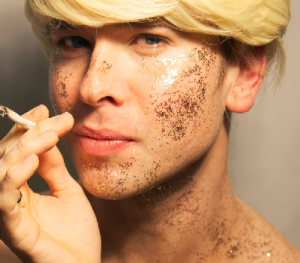 Dead Royal currently being performed at the Ovalhouse in Kennington portrays two royal icons of English history, Princess Diana and Wallis Simpson both ‘commoners’ marrying into the royal family and how they are perceived in current times.

In this one man show the iconic women are both portrayed by Chris Ioan Simpson who has also written and directed the piece.

Set in 1981, the aging Duchess of Windsor, supposedly invites Lady Diana Spencer to her apartment in Paris the night before her marriage to Prince Charles. She is ready to impart her advice on how Diana may survive her impending royal life.

Chris Ioan Roberts firstly portrays Wallis Simpson It doesn’t take long to be drawn into the surreal world of Wallis, who comes across as a jaded, bitter but intelligent woman.

As you are wondering how Diana is going to appear Roberts then proceeds to produce a change of clothes from some very small drawers in a dressing table on set.

In the absence of Wallis, she talks to herself about how she perceives Charles and how she is worried how her life will turn out.

Drawing lines from original quotes from interviews with Wallis Simpson and Diana Spencer, Roberts promises ‘a night of catastrophic royal madness’ and had indeed written a dialogue that is both funny and irreverent with plenty of witty one liners right the way through the 50 minute show.

Dead Royal is a watchable tale, with some genuinely amusing lines, performed fairly admirably by Roberts.

Dead Royal is running at the Ovalhouse 52-54, Kennington Oval, London SE11 5SW until the 25th April.