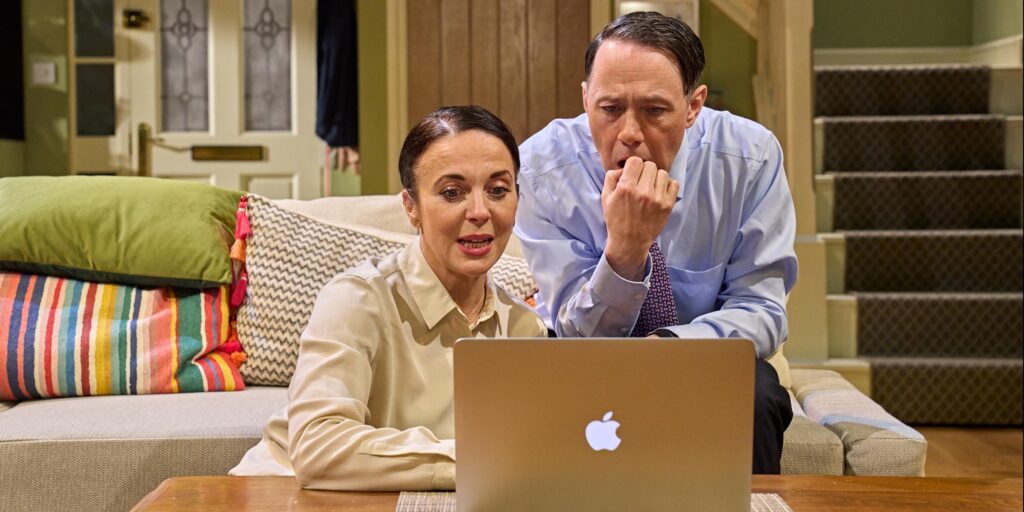 After being postponed due to the pandemic in 2020, Steven Moffat’s new play ‘The Unfriend’ finally opened at the Minerva Theatre in Chichester this week.  With huge recent television successes such as ‘Dr Who’ and ‘Sherlock’ under his belt, it is wonderful that Moffat reminds us that he is truly gifted at writing comedy as well.

Often chance encounters on holiday end up with half promises to meet up again. But what happens when one of these brief encounters pitches up on your doorstep expecting to stay, and furthermore, according to google they have more than an unsavoury past. Do you invite them in or turn them away? How do you politely ‘unfriend’ someone?

This is the problem confronting Peter (Reece Sheersmith) and Debbie (Amanda Abbington), when Else Jean Krakowski, (Frances Barber) a brash, forthright American breezes into their lives. Elsa transforms their home-life unrecognisably to the point where Peter and Debbie are not entirely sure whether it is for the better or worse.

Mark Gatiss skillfully directs this well-crafted and superbly written comedy and belly laughs are plentiful. Sheersmith and Abbington blend beautifully to create a couple navigating the stresses of life, teenage children and a persistent and boring neighbour (Michael Simkins) and Frances Barber is irrepressible as their vivacious and noncompliant houseguest. Anyone with young adults at home will highly rate the performances from Gabriel Howell and Maddie Holliday who have the ‘art of being a teenager’ off to a tee. Completing the cast is Marcus Onilude as PC Junkin, who has possibly the most memorable scenes in the play with Sheersmith, in the first he doesn’t utter a word and the second gives ‘toilet humour’ a whole new meaning.

Admittedly, some aspects of the script are predictable, but the execution is perfection. Even taking the pandemic into account, I haven’t laughed this much in a theatre in a very long time. I suspect The Unfriend will eventually be made into a movie or TV special, but seriously I wouldn’t wait. Seeing it on the Minerva stage is very special, I don’t think you could better the superb comic timing from the entire cast.