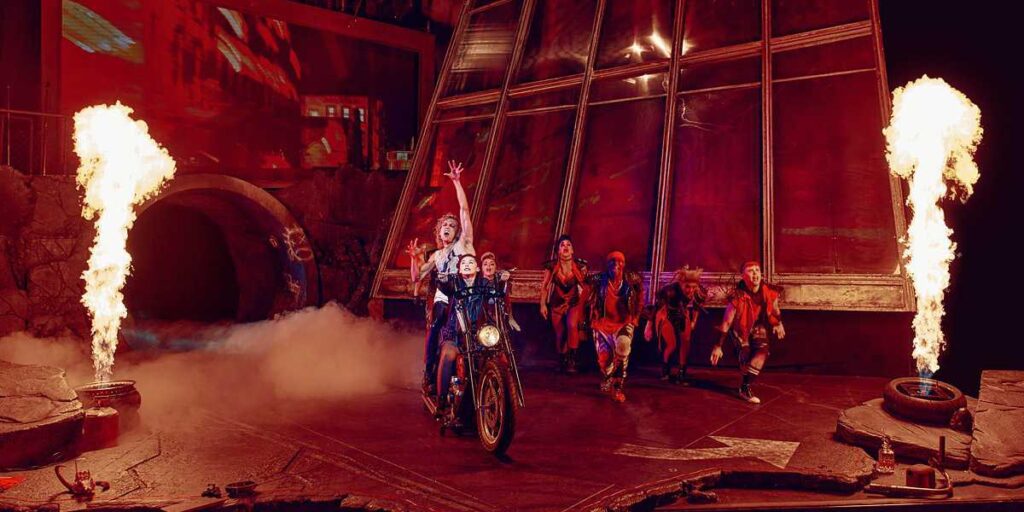 Bat out of Hell

Like A Bat Out Of Hell I was gone out of my front door as I rushed my way to Eastbourne to see this magical Meatloaf musical. After originally reviewing the show when it first opened at the West End I was curious to see how it’s travelling production would compare as this spectacular performance now undertakes it’s first ever UK nationwide tour.

And of course with the recent passing of the legend of Rock n Roll that is Meatloaf, this felt like the perfect way to pay homage to such an icon.

Suddenly the words written by master lyricist Jim Steinman somehow seem even more poignant than ever before. What’s really interesting, is that when writing and composing the songs for the original Bat out of Hell Album, released in 1977, Steinman’s original idea was to create a rock and roll musical in the mould of JM Barrie’s Peter Pan called Neverland, as his grounding was actually in musical theatre. Whilst I’m sure it would have been a big hit, I’m glad it remained in Neverland, as now we can enjoy the colossal success of his partnership with Meatloaf.

The story is a tale of two conflicting worlds colliding as ‘The Lost’, an underground group of youthful rebels forever ‘cursed’ to remain 18 years of age, live under the tyranny of Falco, a rich enforcing man who aims to control the city and stamp out any acts of rebellion. Throw in a love story between Strut, the leader of The Lost, and Falco’s only daughter, Raven, and the drama writes itself in romance that felt very Shakespeare. Whilst the story is fairly straightforward, the real value of this show shines through its music and high production values. You can expect soaring vocals from everyone on stage, and all of the greatest Meatloaf hits such as Paradise By The Dashboard Light, I’d Do Anything For Love, Heaven Can Wait and many many more. Glenn Adamson, who I believe also played Strat in the West End Production, was born to play this role. The energy he puts into the character is sensational and it really feels like he is rock and roll though and through. The set contains The Lost’s dark cavern stage right and a looming tall Falco tower stage left, pinning these two settings together really well. My favourite touches were the camera on stage, which captured live footage forming the backdrop of the show, almost making it feel like an old tv drama and music video at the same time. Falco’s tower also had five illuminating thin lights reminiscent of strings on a giant guitar being struck. There were so many nice visuals that gave the audience so much to look at during the show.

I was really impressed with how the production felt exactly the same as it did when I saw it at the West End. There is no compromise on quality and it really is a large scale spectacle to enjoy. Bat out of Hell truly is a rollercoaster of a ride, it’s bold, packs a punch and makes your laugh along the way, whilst being red hot for more reasons than one.

And if you’re a fan of big classics motorbikes, covered in flames, than there is truly an added bonus for you to enjoy too! It is truly a show where everything is permitted.

You can catch Bat Out Of Hell The Musical On Tour now, visit batoutofhellmusical.com/uk-tour/ for more details.