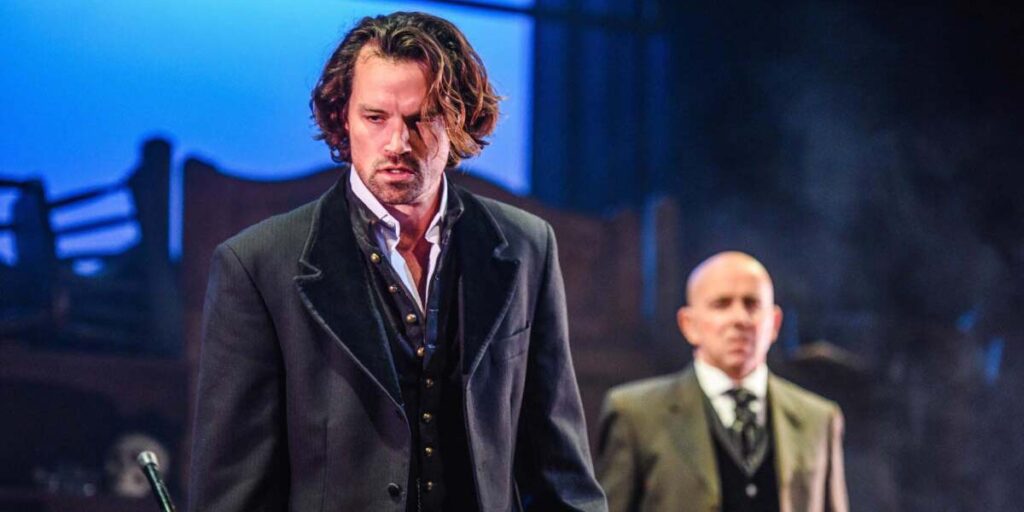 The Strange Case of Dr Jekyll and Mr Hyde

The last production from Blackeyed Theatre I attended was ‘Jane Eyre’ a week before it was forced to close when the first Lockdown was announced in March 2020. The ‘Jekyll and Hyde’ adaptation was already firmly inked in on its calendar. Decisions had to be made: call it a day, or park it for a while and hope for better days to come. Well, thankfully better days did come, if only for a short time in September 2020. The play was first staged in 2017, and for this revival 3 of the original cast were happy to rejoin this production, with the addition of Blake Kubena in the title role. Now it is enjoying huge success touring the UK until May 2022.

Since R L Stevenson penned his extraordinary novella in 1886, it has achieved worldwide recognition spawning innumerable adaptations, films, plays and TV productions. So totally absorbed into the English language is the name that we’re now very familiar with the phrase ‘Jekyll and Hyde’ as an everyday term to describe anyone having a mild case of behavioural change to extreme cases of psychosis.

If you have experienced a Blackeyed production before you will perhaps be familiar with Nick Lane’s impressive writing and directorial technique, and with the ensemble pieces he achieves, giving each performer an opportunity to showcase their talents by each taking on multiple roles, performing choreographic feats, sometimes singing and – in some productions, playing instruments – which is pretty unique. This particular production was no different. I hear that ‘Jekyll and Hyde’ is currently a set text on the GCSE syllabus, which explains why most of the audience comprised 15 and 16 year olds. The production company is actively encouraging them to come along to performances, also giving teachers and students access to the streaming of the play.

I have to admit that I was a little confused for the first 15 minutes of the drama, as the cast apparently were offering their skills at the same time. They all appeared, masked, on stage at together, and proceeded to sing a little madrigal type number. There were various sound and visual effects and at one point a figure in a hooded scarlet cloak appeared and just as quickly disappeared. Not clear why. I’m also not sure about how effective the use of masks was throughout the rest of the play. They were a tad gimpy and obviously restricted the actor’s ability to deliver their words – particularly noticeable when Jekyll/Hyde calls in muffly tones for his housemaid to bring him a note. However, if that could have been overcome it would to my mind have been quite acceptable for Jekyll to be mask-less and Hyde to sport a scary facial prop at appropriate times. Easier to tell them apart!

Blake Kubena is a natural in this role, his projection and wonderfully rich resonant tones (close your eyes and think Matt Berry) are perfect for his dual role. He has an amazing stage presence. Propelled full on into the gothic horror of the piece, we are completely mesmerised by his portrayal of the tortured Dr Jekyll and his subsequent transformation into his alter ego, the abhorrent Mr Hyde. My only small criticism is that sometimes it was difficult to distinguish between the two roles. However as the play progressed, this clearly became irrelevant as Jekyll eventually became increasingly unable to control the transformation. I just felt that Hyde remained unchanged from the tall dark and handsome Jekyll, slightly reminiscent of Poldark, simply losing the cane and the limp.

Jekyll’s close confidante the lawyer Gabriel Utterson was played by Zach Lee who gave us a wonderfully understated performance, as did Simon Rodda as Jekyll’s altruistic and loyal friend, Hastings Lanyon. Both men’s mild characters were in stark contrast with that of the wild and powerful Hyde. Paige Round, with a well-practised Irish accent, delivered a striking performance as Lanyon’s wife Eleanor, falling hopelessly in love with Jekyll, with disastrous results both for her and her cuckolded husband. Playing the ‘lady of the night’ Annie plus Mrs Bradshaw the housemaid, meant she needed to switch from the accent of the Emerald Isle to the Cockney of the dark streets of London town fairly frequently, ably managed.

This production was dark in every sense of the word, remaining true to Stevenson’s original Victorian novella. The pulsating music (from the talented Tristan Parkes) and the use of haze created the impending sense of doom, the first act ending in one of the best choreographed pieces I’ve seen: a slow-mo enactment of the vicious and gratuitous murder of a perfectly innocent man. It was staggeringly brilliant, a perfectly controlled enactment, somehow the ingeniousness of performing it in this unique way making it even more shocking. Congratulations to the Movement Director Enric Ortuño. Altogether another impressive and memorable production from the superb Blackeyed Theatre.