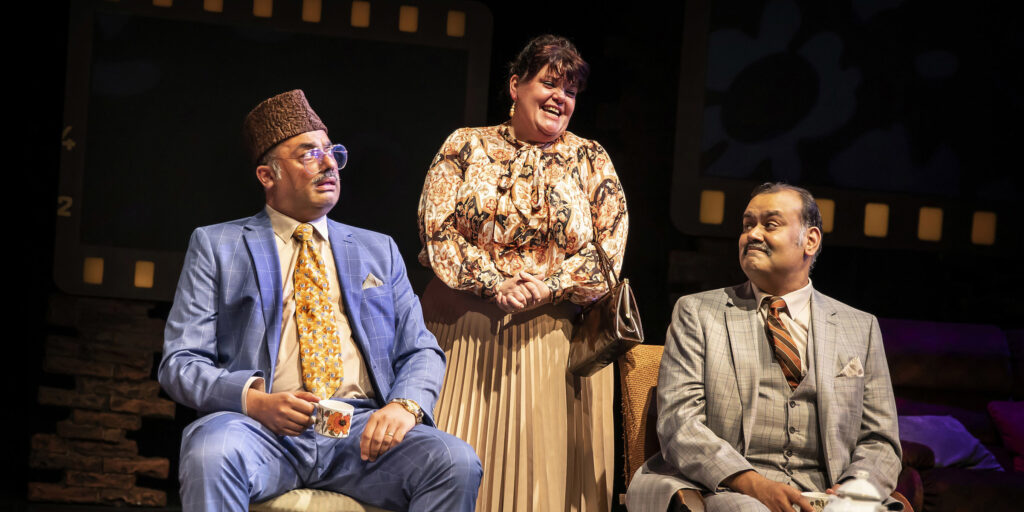 George Khan wants to raise his family in the traditional Pakistani way, but his children have other ideas. Abdul and Tariq aren’t ready to be married off, Saleem is pushing artistic boundaries, Meenah’s school skirt is too short and Sajit just wants to hide in his parka. As relations reach breaking point, their English mother, Ella, is torn between her loyalty to George and the happiness of her children.

Ayub Khan Din’s much-loved comedy drama was adapted into a BAFTA Award-winning film and has now been revived after 25 years in a co-production between the Birmingham Rep (where it first opened in 1996) and National Theatre. The question is how much has changed in a quarter of a century, if anything? Would the Khan family be more accepted now than they were pre-Brexit? Questions about identity have never been as topical in all parts of the community as they are at the moment and this is no longer an Asian conversation. Everyone is having the conversation now: What is our national identity and how much has it been damaged?

Against the history of the East – West Pakistan war which led to Bangladesh’s declaration of independence (formerly East Pakistan), Bretta Gerecke’s backdrop resembles large Polaroid snapshots showing a moving album of photographs metaphorically taken by the youngest son, Sajit who’s never seen without his camera. Noah Manzoor is wonderful as  the fledgling son in a storyline that could have been taken straight out of Jack Rosenthal’s Bar Mitzvah Boy. In fact, all the younger actors are charming and unique, mercilessly ridiculing one another and in particular, Amy-Leigh Hickman as the only daughter who strops and stomps as only real teenagers can and Adonis Jenieco as art student, Saleem command the stage in a way many older actors fail to. Jenieco’s rich and resonant voice bounces around the stunning auditorium in a way Burton or O’Toole would have been proud of. Bravo!

As Ella, George’s long suffering and world weary English wife (he also has one in Pakistan), Sophie Stanton is beautifully understated although she did stumble a few times over her lines. Her scenes with Rachel Lumberg as Auntie Annie who is constantly popping round for a cup of tea and a gossip are the highlight of the show. Lumberg’s comic timing as she tells anecdote after anecdote about her experiences of working as an undertaker’s assistant is perfectly pitched and she has some of the best lines in the script. At times I thought I was watching a Victoria Wood sketch which is an enormous compliment to both Stanton and Lumberg.

Tony Jayawardena as George is very good however I found him difficult to understand at times so strong was his accent. His scenes of domestic violence are difficult to watch, not just because of the abuse but also because they are clumsily choreographed however Jayawardena is naturally funny and despite his character’s aggressive tendencies, his warm and touching performance grew on me as George desperately tries to keep control of his family.

A small gripe would be the curtain call. Was it really necessary for the actors to enter in a pantomime-usque walk down? East is East is surely an ensemble piece and resorting to antiquated hierarchy within the theatre is inappropriate especially in a play that questions the very concept of patriarchy.