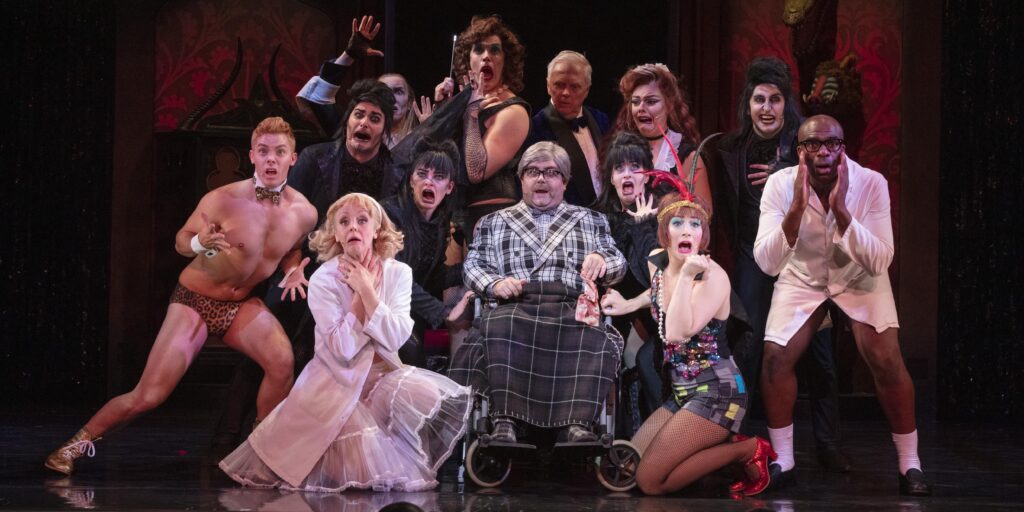 Familiar words of an all-time party classic ‘The Time Warp’, guaranteed to get people onto the dance floor. The song is from The Rocky Horror Show, a musical that has been around since the 1970s and keeps getting better with age.

The touring production of the Rocky Horror Show has visited the Theatre Royal Brighton three times in the last six years and it is not surprising why.

Last night, on a (very) cold Monday evening in late November, hundreds of people in various states of undress and sexy attire filled each of the Theatre Royal’s 4 tiers to capacity. It is almost as though the show was written for this outlandish Brighton audience, they were primed before the curtain went up.

Once again, the show did not disappoint. This morning I read our two previous reviews (both 5 star) and I am so pleased to say that the quality of the set, costumes and actors hasn’t diminished.

Kristian Lavercombe has played over 1800 performances as Riff Raff in the West End, on tour and across the Globe and shows no sign of slowing down or giving up. He has mastered the part to perfection and I sure that Richard O’Brien (creator of the show and original Riff Raff) approves wholeheartedly. Stephen Webb is also no stranger to the role of Frank N Furter having played it on the previous tour, he leads the show with exuberance and ardor. Welcome additions to the cast are Ore Oduba (yes from The One Show – who would have thought it?) and Haley Flaherty as newly engaged couple Brad and Janet, they were just sublime. Philip Franks as the Narrator fielded all the audience’s verbal heckles with hilarious responses.

The show achieved a huge standing ovation… and rightly so.

There is a reason The Rocky Horror Show has remained a cult classic since the 1970s. It is a raucous, exhilarating and hilarious night out and when it makes a return visit to Brighton (and I am sure it will) I shall make sure I am at the front of the queue for tickets, as will many others.