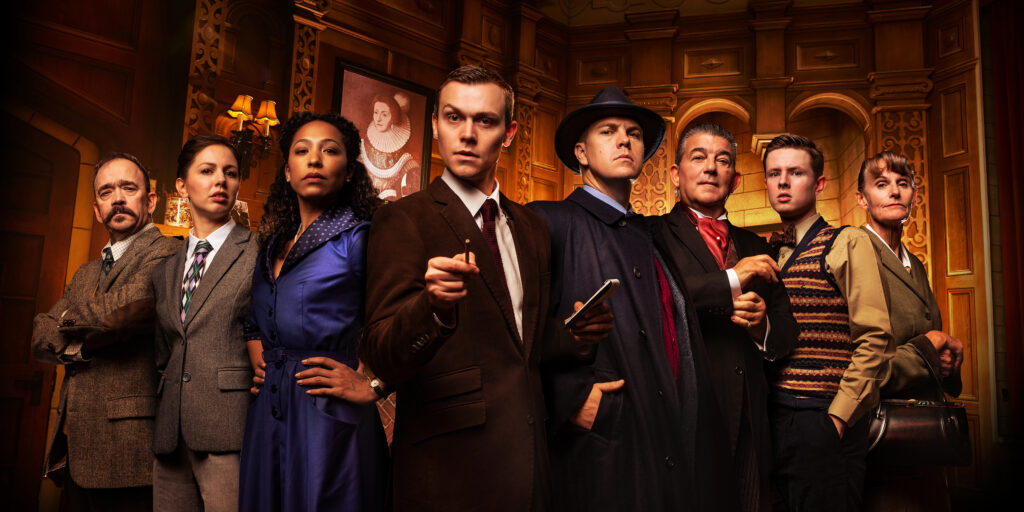 How do you begin to review the longest running play in the world? Spanning a staggering 70 years of continuous production until Covid struck in March 2020, reopening in May 2021, The Mousetrap was only just over a year in abeyance. On October 6 1952, almost at the same time as Queen Elizabeth 11 ascended the throne this ever popular play opened to the public at Nottingham’s Theatre Royal. How fitting then that we can still feast on this Agatha Christie delight in the same month at the Theatre Royal in Brighton 70 years later.

Agatha Christie authored no fewer than 66 detective novels and 14 short story collections, many featuring her two famous detectives, Hercules Poirot and Miss Marple – the first a professional Belgian detective with a moustache more famous than himself, and the second very much an amateur with a sizeable penchant for solving murders. The beauty of ‘The Mousetrap’ is that Christie originally wrote it as a radio play (called ‘Three Blind Mice’) before it was developed for the stage, meaning that only theatregoers could subsequently be privy to the identity of the murderer, and traditionally to this day patrons are politely requested by the cast at the end of the production not to reveal ‘whodunnit’.

There can’t be many of us who would not recognise the familiarity of a Christie plot and Mousetrap most definitely does not deviate from the genre she has almost unfailingly embraced: that of the posh country mansion, an eclectic selection of guests assembled and just getting comfy when one of them is murdered in a particularly grisly fashion. There follows a police investigation where each person is interrogated, resulting in a ‘big reveal’ following a lengthy display of gradual disclosure when all the guests have been gathered together for this very purpose.

The Mousetrap is set in Monkswell Manor, a newly opened guest house owned by inexperienced hoteliers Mollie and Giles Ralston (Joelle Dyson and Laurence Pears). The set for this production was reminiscent of a small castle, impressively designed and constructed, and appropriately giving us a bit of a chilly feeling right from the off, especially with a ‘blizzard’ raging outside the big sash window and the news of a murderer on the loose being reported on the wireless. Yes, this is 1947, it was indeed a wireless! So, the scene is set and we await with delicious anticipation the arrival of the guests! They duly appear, suitably decorated with ‘snow’, in rapid succession, 7 in total, each one an over-the-top archetype, so associated with Agatha Christie’s murder mysteries. The model may always be pretty much the same in every story, however how many of us ever actually guess correctly who the murderer is? Such is the clever Ms Christie’s abiding appeal.

Todd Carty as the marvellously nutty Major Metcalfe is definitely not playing according to the previous ‘type’ of his long running role in Eastenders that we most associate him with. He is excellent as a character who reminded me of the wonderfully eccentric Major in Fawlty Towers, bumbling and mumbling and generally looking rather bewildered throughout. Elliot Clay really camps it up as the theatrically garrulous Christopher Wren – an architect of course! – adding a great deal to the entertainment value of the piece. This element of entertainment brings me to the enigmatic overblown Mr Paravicini, on this night played by Kieran Brown, who was an absolute delight, with beautiful comic timing and one of the best exaggerated Italian accents I’ve yet to hear. As a mysterious ‘foreigner’, he himself volunteers the idea that he could be viewed as highly suspicious.

The acerbic and complaining Mrs Boyle (Gwyneth Strong, well known for playing Cassandra in ‘Only Fools and Horses’) is a treat, and Essie Barrow as Miss Casewell provides the elegant and youthful ingredient. Lastly, Joseph Reed as the splendidly unrelenting DS Trotter (no connection with Ms Strong’s casting!) is hardly ever off stage once he appears on the scene, doggedly interrogating the guests in true Christie fashion, each one without a sound alibi and each one seemingly having a motive. This creates a lovely mix of tension and comedy, the constant theme of ‘Three Blind Mice’ nicely overlaying the script with various characters humming and singing it and Mr Paravicini eerily delivering a one-fingered plinky plonky version on the piano, out of sight of everyone else.

All in all this production is highly enjoyable, all the actors delivering strong performances. I have only seen this play once before, many years ago, but that did not detract in any way from the pleasure derived from this superb production. There have been around 30,000 performances since Richard Attenborough and his wife Sheila Sim first appeared in that original stage production 70 years ago, which is an incredible achievement.

Bravo ‘The Mousetrap’! Keep on keeping on, as Alan Bennett would say.