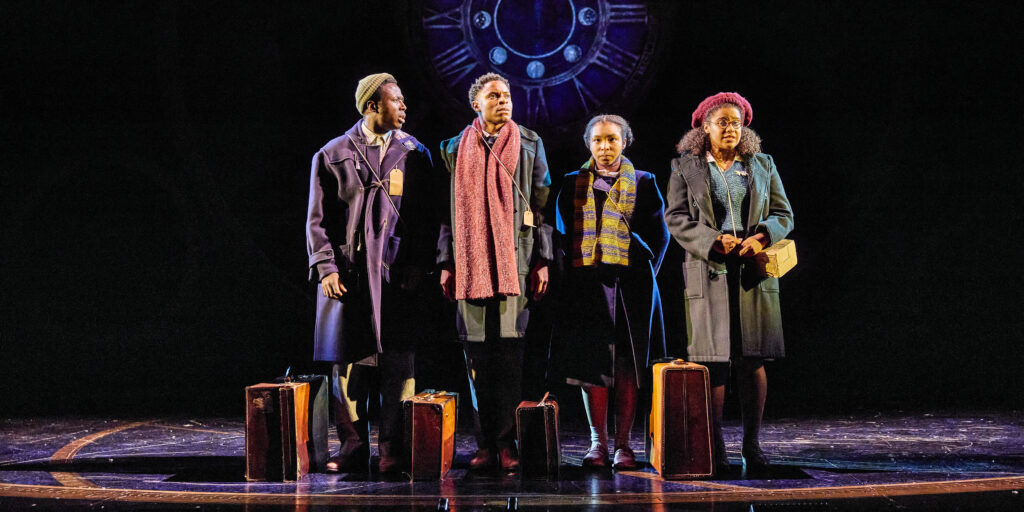 The Lion, the Witch and the Wardrobe

THE MAGICAL WORLD OF NARNIA COMES ALIVE ON STAGE

On Wednesday this week, I joined the hundreds who battled torrential rain to reach the Gillian Lynne theatre to watch The Lion, The Witch and The Wardrobe. Despite the soggy start, the show was an absolute delight full of nostalgia and wonder, which could make even the most miserable attendee crack a smile.

Despite the extensive advertising all over London and online, I am still unsure how it is that I missed the fact that this production of The Lion, The Witch and The Wardrobe is a musical. My friend and I were attending with the assumption that the classic novel had been transformed into a play, and the opening number of We’ll Meet Again took us quite by surprise. Not to say we found this unpleasant – entirely the contrary. The score, by composers Benji Bower and Barnaby Race, was an absolute masterpiece, setting the right tone for each moment, and beautifully framing the singers.

The singing was vastly enjoyable. Individual singers also really shone; Julian Hoult (Mr Beaver) and Jez Unwin (Mr Tumnus) had insanely strong belts, and Johnson Willis (Professor Kirk / Father Christmas) had a truly incredible range. The singing was incredible in chorus, giving very much ‘Come From Away’ / Irish jig vibes. In contrast, I admittedly did find the acting to be hit-and-miss. The strongest performances for me were Samantha Womack as the White Witch (who could not have been cast more perfectly), Ammar Duffus as Peter Pevensie, and Delainey Hayles as Lucy Pevensie (who could not have played a more convincing 8 year old). I initially struggled to engage with Edmund (Shaka Kalokoh), but found his physical theatre at the end of Act I captivating. Likewise, I struggled with the woodland creature ensemble, whose lines I found mostly unnecessary, and irksome, reminding me much of the fairytale characters from Shrek the Musical. There was a lack of overall character development of the Narnian creatures, which was a shame, as a more heartfelt investment would’ve given more emphasis to the need to save the realm.

The thought behind the costumes, as designed by Tom Paris, Joanna Coe and Susanna Peretz, was apparent by the layers. Every Narnian donned a garment that not only stayed true to original source material illustrations, but incorporated wartime imagery into every aspect, as well as accounted for the fluidity and maneuverability of musical theatre. The Witch’s array of costumes were each as magnificent as the next, with a fur coat that would put Game of Thrones to shame, and details as meticulous as stitched skulls along the dress train. Father Christmas’ costume too was a particular favourite – eccentric and delightful in equal measure. It must be said though, occasionally I did feel like the costumes failed to hit the mark, especially for the villains. Maugrim was unnecessarily ‘furry’-like, and the Witch’s minions leather kilts I found a bizarre choice, but perhaps the comical angle was to avoid scaring any young audience members.

The choreography and set were breath-taking in every way, and felt nothing short of the real Narnia. The collaboration of Tom Paris (Costume & Set Designer), Shannelle ‘Tali’ Fergus (Choreographer) was one destined for success. Illusion and Magic Specialist Chris Fisher‘s brilliant touches skyrocketed the audience right into the mystic world. Similarly, the clever use of the mushroom canopy and unique lighting was also delightful, with orbs and globes and LED cubes, drawing your attention to every corner of the scene. The only drawback was that sometimes the stage felt overcrowded, with up to 21 people on stage at the same time, but arguably this was a wonderful way to incorporate the live band in a more immersive manner.

Overall, I would say it was a wonderful production of The Lion, The Witch and The Wardrobe, with beautiful tributes to C. S.Lewis‘ original source material, whilst also bravely pioneering new perspectives and narratives. I believe that whilst I found critique with a number of aspects, this is somewhat unfair, as this is definitely a production aimed at children, and likely has had to adapt elements to better appeal to its target audience. To a school, or a parent, I would highly recommend this production, as it is certainly magical, and definitely worth trudging through torrential rain to reach!