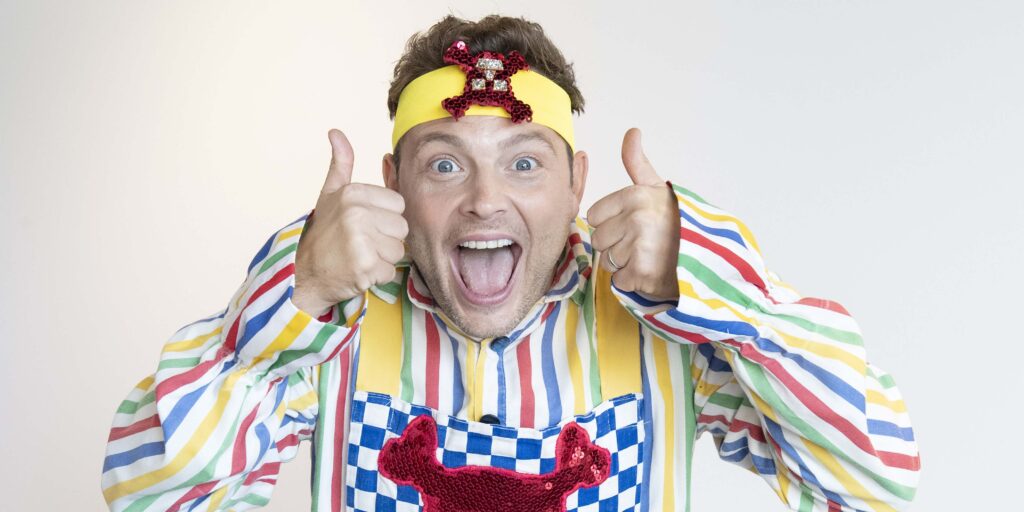 The Further Adventures of Peter Pan

Mark Rhodes is one half of the hugely popular TV presenting duo Sam and Mark. The pair have come a long way since Pop Idol in 2003, coming 2nd and 3rd respectively.

It was whilst filming backstage VT’s that their friendship began and the dynamic between Sam & Mark was sparked.

Mark is probably best-known for presenting 8 series of Sam & Mark’s Big Friday Wind Up (CBBC) for which the pair received two Children’s BAFTA’s for Best Presenters and a Children’s BAFTA for best entertainment format. The duo has most recently presented the BBC reboot of Crackerjack. Firm family favourites with a wealth of credits, the duo have also hosted hugely popular shows including Level Up, TMi, Copycats, Junior Bake Off and Match of the Day: Can You Kick It to name but a few. Alongside their TV success, Sam and Mark have also published three children’s books The Adventures of Long Arm, The Adventure of Long Arm vs The Evil Supply Teacher and the picture book The Stink Before Christmas.

This Christmas Mark is performing in pantomime in Croydon.

You have been a children’s entertainer on TV for a good few years now, so it is a natural progression to perform in panto. However, live performances must present challenges that you don’t get in a TV studio. How do you find it?

I actually prefer to perform in front of a live audience as it’s an instant buzz and you feed off the energy they give you. I have done lots of live tv in my career with a studio audience and that’s very similar. Pre-recorded tv is harder if I’m honest as you have to keep doing it until it’s perfect.

Pantomimes are an integral part of Christmas but the last couple of years have been devastating because of the pandemic. What does it mean for you to be back in panto again?

It’s wonderful to be honest. This industry has taken a hammering with it being the first to shut down and the last to open. However moving forward I believe the public are itching to get back to watching people perform and that can only be a good thing for the future.

You must miss being at home for the holidays?  How do you celebrate?

I’m lucky as i don’t live too far away so I can go home during the run. I love Christmas and my kids love the fact I’m doing panto so we incorporate them coming to see me in our celebrations which is so nice.

The further adventures of Peter Pan – I take it the story is completely different to the traditional one we are familiar with, what can you tell us about it?

It’s a revenge story essentially. Peter thought he had gotten rid of hook but he’s a clever villain who has come back to get his ship…with hilarious consequences.

Tell me about your character.

I’m Smee..lovable rogue I suppose. He’s trying to be a good person after being hooks stooge for so long. Needless to say as soon as Hook comes back for his ship poor old Smee is in big trouble. He’s the comic character which for me is very exciting and lovely to play.

For me, panto is about exuberance, colourful costumes, big characters and the musical numbers. What have we in store?

All of that and more. The costumes are amazing! Mine looks like a rainbow has been sick on me 😂

The panto season is full on! What do you do afterwards to unwind?

Eat and drink lots! Wouldn’t be Christmas without putting on a stone in weight through chocolate and Turkey.

The Further Adventures of Peter Pan is playing at Fairfield Halls in Croydon between 10th – 31st December. Tickets and group bookings are available from bhlivetickets.co.uk with special early bird rates and super schools offers also available.