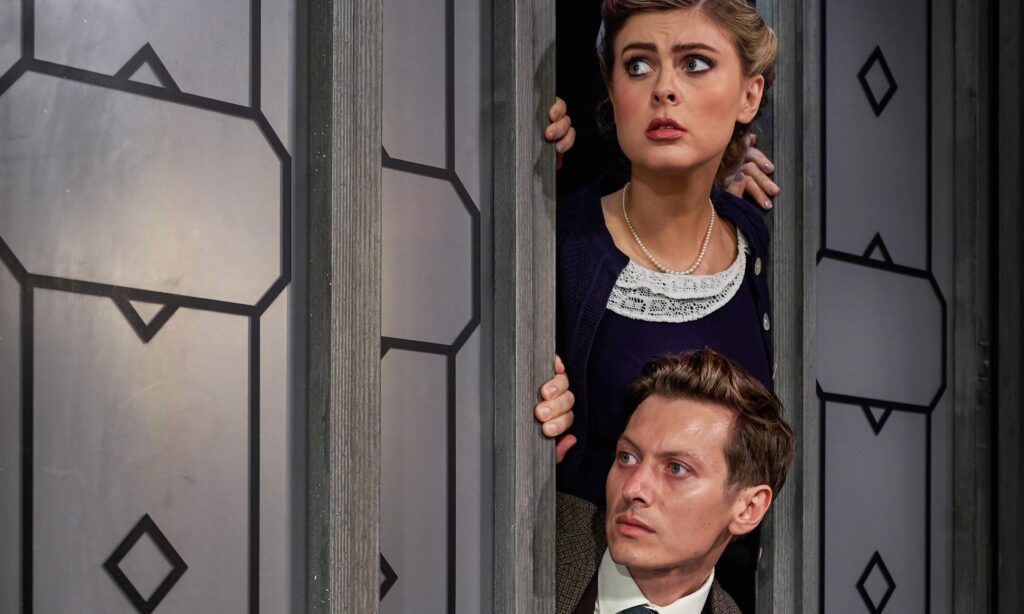 The Brighton audience eagerly awaited the start of The Lady Vanishes production from Bill Kenwright’s touring company The Classic Thriller Theatre Company, directed by Roy Marsden (Inspector Daglish) and adapted from the original Hitchcock film in 1938, the show had great potential. We all love a classic thriller !

The set was very realistic as the show opened in a vast Viennese railway station occupied by the Nazis during the Second World War where services from Vienna to Zurich have been suspended during an avalanche. The Nazi flags and insignia drop from the roof of the station to give a chilling atmosphere, the steam from the trains spills into the auditorium. The busy buzz of frustrated passengers, a 13 strong cast, trying to reach their ultimate destinations with their own agendas was well choreographed and the scene was set and looking good for the unravelling mystery. There is a thaw and the train can now clear a passage through, with the set creatively becoming two carriages on the train, and that’s where our thriller starts.

So, in true Hitchcock style, confined on the train, we get to meet each character on board as their own story unravels – a dizzy blonde (Iris, played by Scarlett Archer) returning to the UK to be married; Eric (Mark Wynter), a high court judge returning home with his mistress Margaret (Rosie Thomson) after a few weeks’ naughtiness in Venice; cricket loving characters Charters (Denis Lill) and Caldicott (Ben Nealon) travelling home to watch an important match; Dr Hartz (Andrew Lancel) picking up a shrouded patient on the journey accompanied by a nun wearing high heels (Natalie Law); Signor Doppo (Martin Carroll) a master of deception and tricks; a menacing Nazi Official (Joe Reisig); arrogant young pup Max (Nicholas Audsley); and dotty old lady Miss Froy (Gwen Taylor).

However, the smoothness of their journey is disturbed by the sudden disappearance of Miss Froy, who seems to have completely vanished from the train. At first only frantic Iris sees the problem, and much of the tension of the story lies in the motives the others have for refusing to help her. Luckily Max believes in Iris and the pair seek to unravel and solve the mystery.

The problem with the production that the cast didn’t seem to know how to play it. Was it really a serious drama? The show was peppered by some good classic comedic moments from Charters and Caldicott but on the whole, the production felt overacted and achieved little intimacy from the audience. Admittedly, this kind of involvement is focussed better in a film where expressions and glances can be integral to the plot rather than a vast stage production where the threat to the key characters is off-stage and can only be pointed to leaving the audience less involved. There were several laughs from the audience during the fight scenes and the frantic running about and shouting by the cast at times caused a few giggles so perhaps it would have been better to have been revamped as a comedy.