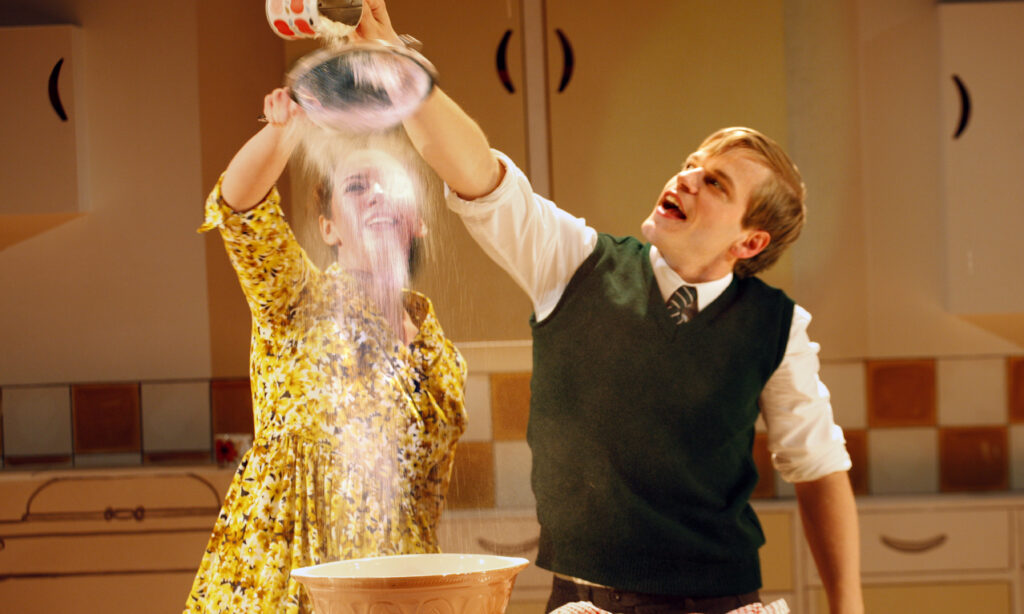 From the moment the audience enters the auditorium to the familiar smell of burnt toast from the kitchen decked stage and the play opens to the statement “ It is impossible not to love someone who makes toast for you”, you are taken on an evening of nostalgia from Nigel Slater’s best-selling film and book of the same title written in 2004 about his coming of age experiences between 9 and 16 years revolving around his excellent descriptive love of food intertwined with complex family recollections.

Nigel Slater has been heavily involved in the book’s transference to stage and the lead character, Giles Cooper, is well cast as Nigel and plays the role so believably not overacting the childish mannerisms which can sometimes be awkward to witness on stage when played by an adult. His descriptive narrative of his experiences and emotions are endearing to the audience and take them back to memories from their own childhood.

The cast of five in multi-roles take the audience on a journey of 1960s cooking nostalgia, driven by the recipe book of Marguerite Patten initially with homely jam tarts but then introducing us to the recollections of Angel Delight, spaghetti hoops, the introduction of Spaghetti Bolognese to the dinner menu and shares literally an old fashioned sweet shop visit with the audience (you need to ignore the paper rustling as we all tucked in to the PicknMix Parma Violets and penny sweets)  plus there is a whole scene devoted to eating Walnut Whips !.

The story itself is hinged around Nigel’s love for his adoring mother ( Katy Federman) and their joyful baking sessions together but she sadly dies of asthma when he is a young boy and his stiff-upper-lipped father (Blair Plant) finds it hard to cope alone. Dad soon marries his ex-cleaner, Auntie Joan (played delightfully by Samantha Hopkins) and Nigel feels forced to compete for his father’s affections with his stepmum as they bake his dad’s favourite food and cakes.  Only when his father dies does Nigel feel free to pursue his dreams of being a chef and leaving his hometown of Wolverhampton to head for the bright London lights.

The play is interspersed with music from that era and choreography using stage kitchen units which at times felt unnecessary and distracting but perhaps was done to lighten the mood which sometimes was sad. The production though is a fun celebration of food with real-life passionate cooking by Nigel at the end which perfectly illustrates his love for food formed from his childhood experiences. I left the performance wanting to know more about the real-life Nigel Slater so the production achieved its goal of tempting the audience for more…..