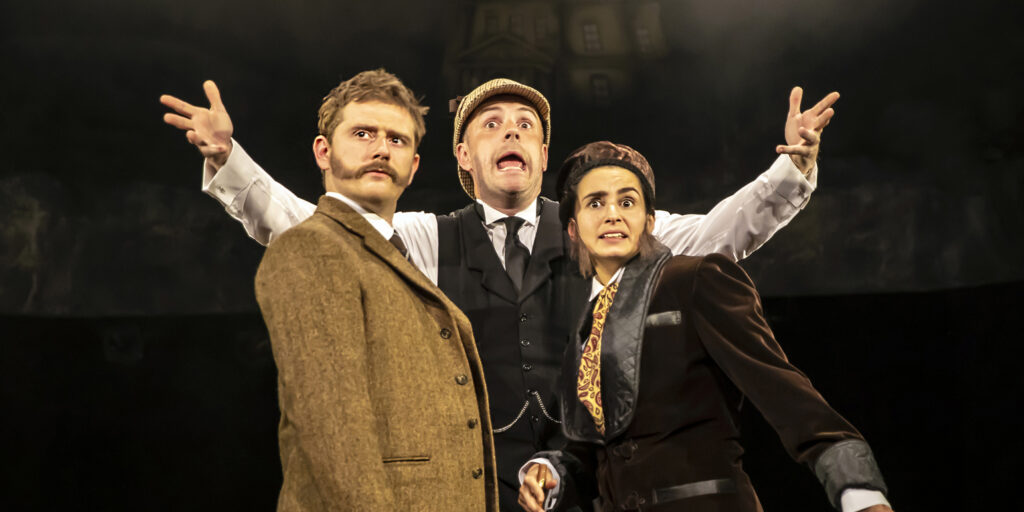 The Hound of the Baskervilles
Devonshire Park Theatre, Eastbourne

A year after the successful Patrick Barlow adaptation of The 39 Steps opened at the Tricycle, this Peepolykus version of the novel that brought Sherlock Holmes back from the dead adopts the same idea in using a small group of actors frantically playing a large number of characters with lots of knockabout comedy and imaginative use of props and costumes.

Written by Arthur Conan Doyle in 1901, the novel was serialised in The Strand Magazine and was published in book form in 1902. It was the first Sherlock Holmes tale since the detective’s shocking “death” in the story “The Final Problem” (1893) but was set prior to his demise. The popularity of The Hound of the Baskervilles helped pave the way for Holmes’s appearance in later works.

After warning the audience how scary the story is to be, the play begins proper in the office of Sherlock Holmes, where the great detective and his friend Dr Watson are visited by Dr Mortimer with a local legend of a spectral hound that haunts Dartmoor in Devonshire bumping off successive generations of the Baskerville family including Sir Charles Baskerville who is found dead with his face twisted in stark terror. Holmes is called upon to protect his heir, Sir Henry Baskerville but he leaves Watson to travel to Dartmoor with Sir Henry and remains in London. Or does he? Upon his arrival, Watson learns that an escaped convict is on the loose and more unsettling is the appearance of an unknown figure on the moor.

This co-production by the Bolton Octagon and Original Theatre Company re-opens the Devonshire Park Theatre which has been closed since the beginning of the first national lockdown.

Against a raised and three dimensional backdrop (beautifully lit by Derek Anderson), the three actors play all the characters with tremendous energy and in particular, Jake Ferretti and Serena Manteghi get to demonstrate their huge versatility with numerous costume changes as Ferretti is required not only to play Holmes himself but also Stapleton, his DAUGHTER, Barrymore and his wife.

Manteghi is astonishing, adopting several accents (although she can’t do Canadian!) and her facial expressions have to be seen to be believed. Hers is a truly marvellous and very, very funny performance. After a slow start, Niall Ransome as Dr Watson grows on the audience as we get to understand this bumbling, amateur detective who suspects everyone and anyone.

My only criticisms are when talking to the audience in an almost Commedia style, this hugely talented cast are almost too well rehearsed and you don’t get the feeling they are being spontaneous which is a special skill in itself and the sound effects are actually too quiet. The hound should be genuinely scary whereas this ghostly canine seemed more like a sedated chihuahua.

These are minor quibbles of an otherwise excellent production.