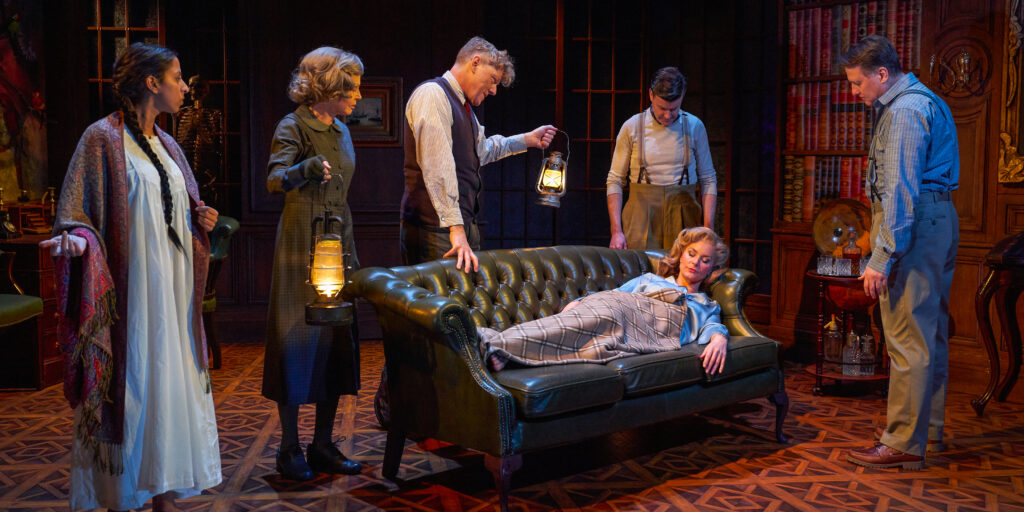 The Cat and the Canary
Theatre Royal, Brighton

Who is the Cat? Even though a caged canary may be safe from the cat’s claws, how does it know that? Can a canary be frightened to death?
Can we?

So addicted were the audiences of the 1920s and ‘30s that a whole raft of films and plays were set in almost identical surroundings, featuring a cast of loosely linked (often distantly related) people gathered together in said creepy mansion, who gradually reveal themselves to be mad, bad and/or murderous.

Actually the original play was first published and staged in New York in 1922, written by American author John Willard, later adapted into several feature films between 1927 (a silent film starring Laura La Plante) and 1979. In between and since there have been innumerable productions, versions and adaptations, such is this classic’s perpetual appeal. Add the fact that it’s almost indiscernible from one of our Agatha’s offerings, if you’re a Christie fan, what’s not to like?

Bill Kenwright’s play is for this production set in the 1950s and has all the ingredients of the archetypal comic thriller, populated with stereotypical characters gathering separately in a remote Gothic mansion: deceased owner, eccentric, batty old housekeeper, several distant relatives including a couple of warring male cousins, a beautiful enigmatic female cousin and an unexpected exotic second cousin from India. Oh, plus a will, a dusty old solicitor and a lunatic. (Remember, this particular stereotype is from different times so no offence intended, I’m sure).

The plot is simple and totally recognisable, we love it nonetheless for its predictability and would most likely feel aggrieved to be deprived of the comfort blanket it wraps around us. Would this be because we know that the pleasure we derive as we soak up the anticipated secrets and lies, twists and turns, accusations and revelations, will always culminate in that wonderful anticipatory buzz we get when, following the ever tortuous plot of red herrings, the villainous killer is finally revealed? And, seriously, how many of us honestly ever guess who that might be?

So no more spoilers, or indeed any clues here. We have a fabulous set which features the darkly atmospheric library of Glenthorpe Manor on Bodmin Moor in Cornwall (remote mansion… tick), and it is getting on for midnight (tick). An eclectic assortment of greedy relatives (like ‘cats around a canary’) arrive at various intervals before the witching hour when the will of the deceased owner, wealthy Cyrus West is about to be read by the dusty solicitor, accompanied by claps of thunder and fused lights (tick).

Cyrus West has decreed that his will remain locked in a safe until the 20th anniversary of his death, only Roger Crosby (Eric Carte) the solicitor has the key, and only one person has remained in the house all these years – the peculiar Mrs Pleasant (Britt Ekland). One by one we discover the pasts, personas and weaknesses of those assembled. There are thrills, bangs and much screaming throughout, spooky music and thunder and lightning, all serving to deliver the menacing atmosphere we all delight in. Huge congratulations to the set designer (Takis) for immersing us in the feeling of actually being inside the shadowy old house, to Dan Samson (Sound Designer) and especially to Chris Davey whose lighting effects were quite spectacular. No production values sacrificed here.

The cast list could easily be replicated for any of our 21st century traditional pantomimes: Britt Ekland (former Bond girl, long ago wedded to Peter Sellers, later partnered Rod Stewart, with a string of notable films under her belt) is wonderfully convincing as Mrs Pleasant, the devoted, evil spirit believing housekeeper, once again demonstrating her skills as a comic actress. The relatives feature Antony Costa (previously in the boy band ‘Blue’) as Paul Jones, an ineffectual vet; Gary Webster (‘Eastenders’, new ‘Minder’) playing wide boy spiv Harry Blythe; his nemesis Ben Nealon as the smooth Charlie Wilder (TV roles in ‘Soldier Soldier’, ‘Between the Lines’ and many others) and playing Susan Sillsby is Marti Webb, the actress/ singer ever remembered for ‘Tell Me on a Sunday’ and ‘Evita’. No singing here, sadly, however she delivered a deliciously mischievous performance – sporting a definite look of Susan Hampshire IMO…..

Apart from the disembodied voice of the 20 year deceased Cyrus West, the plot reveals itself to centre around Annabelle West, ably played by Tracy Shaw (well known for her long running role as Maxine Heavey, in ‘Coronation Street’) who shines as the glamorous potential heiress and love interest, gradually revealing a little known past event threatening to affect her newly acquired position …


Priyasasha Kumari as Cicily Sillsby, the exotic second cousin is excellent, her youthful innocence and beauty belie the fact that she is clearly here to lay claim to (if not the prime inheritance) then at least the fabulously valuable necklace brought back from India and now hidden somewhere in the house. Her constant little asides about the Empire stealing India are very funny.

The second act is packed full of mayhem; shouting, yelling and a little dose of emotion as poor Annabelle is trying to convince everyone that she is not mad, and that the lunatic (the ‘Cat’) is alive and present in the house.

This tongue-in-cheek production delivers strong performances and is hugely enjoyable. Corny, yes. (At one point Annabelle, alone in the library, later explains ‘I picked up this book without knowing what it was …. it seemed to open itself at this chapter … called FEAR’.) Well I never. But, we still love it. The audience responds at each twisty revelation with appropriate intakes of breath and squeaks of terror, and there were lots of those as the play drew to its revelatory conclusion, `a la Christie of course!
As TV’s ‘Miranda’s mother would say ‘SUCH fun!’