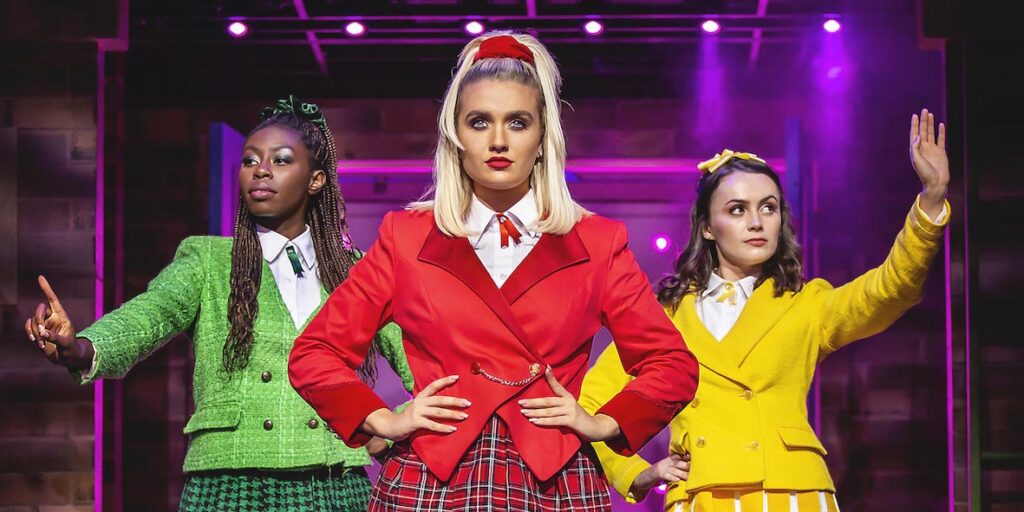 Having never seen the 1989 film of Heathers and very little knowledge of the musical my pre-show research taught me it was a high-energy black comedy which opens conversations about dark issues, including bullying, teen suicide, sexual assault, and school violence.

Well, it’s certainly high energy and the talented cast never let their vitality drop for one second however those so called dark issues are barely discussed. They are merely glossed over with a step ball change, a few jazz hands and a flurry of cringe worthy lyrics, (My boy’s a homosexual, And that don’t scare me none. I want the world to know, I love my dead gay son!). It’s also not that funny and this production’s glib attitude to the aforementioned serious subjects as well as homophobia and bullying is rather distasteful. This may have worked in the original movie whereas here it is simply misguided. There are some very good songs and many of them are sung very well but the overall feeling is that the source material just doesn’t lend itself to a musical adaptation.

Heathers is the story of Veronica Sawyer, a senior at the fictional Westerberg High. Veronica longs to be cool like the clique of girls that runs Westerberg: the unaffected, unattainable Heathers. Unfortunately, in addition to awesome levels of popularity, the Heathers are also cruel, choosing to mock and bully their kingdom into submission. When Veronica uses her skills as a forger to get the Heathers out of detention, she impresses their leader Heather Chandler, so much so that they agree to let her into their exclusive club. At first Veronica is thrilled, until she finds out that being one of the Heathers means bullying the same kids she used to call friends. Meanwhile, Veronica finds herself attracted to a mysterious newcomer at school named Jason Dean (JD). When an innocent drink mixup results in the accidental poisoning of Heather Chandler, JD convinces Veronica to stage Heather’s suicide. The results are so successful that Veronica and JD, exhilarated with their newfound power, resolve to rid Westerberg of the cruelly popular elite forever.

Rebecca Wickes is simply outstanding as Veronica but it is Lizzy Parker’s beautiful rendition of the song Lifeboat that is the most memorable. It is one of the best numbers in the show mainly because it is performed with sincerity (all the more impressive as Parker is making her professional debut). I thought JD should have been played much darker or perhaps more tongue in cheek whereas Simon Gordon’s performance falls somewhere in between with a degree of nonchalance although he does have an excellent vocal range.

In the production’s defence, it is beautifully lit (special mention to Lighting Designer, Ben Cracknell) and at least the set designer has remembered the tour is visiting the relatively small Theatre Royal. As a show I am probably not the intended audience and I should make it clear that both my teenage daughters loved it.

Overall, this is a mixed bag and will, as I say, be enjoyed by audiences who have perhaps not seen far superior musicals. Maybe I’ll finally watch the original film although having sat through this rather mawkish production, it’s not at the top of my list but I’m old so don’t take my word for it, go and make up your own minds.