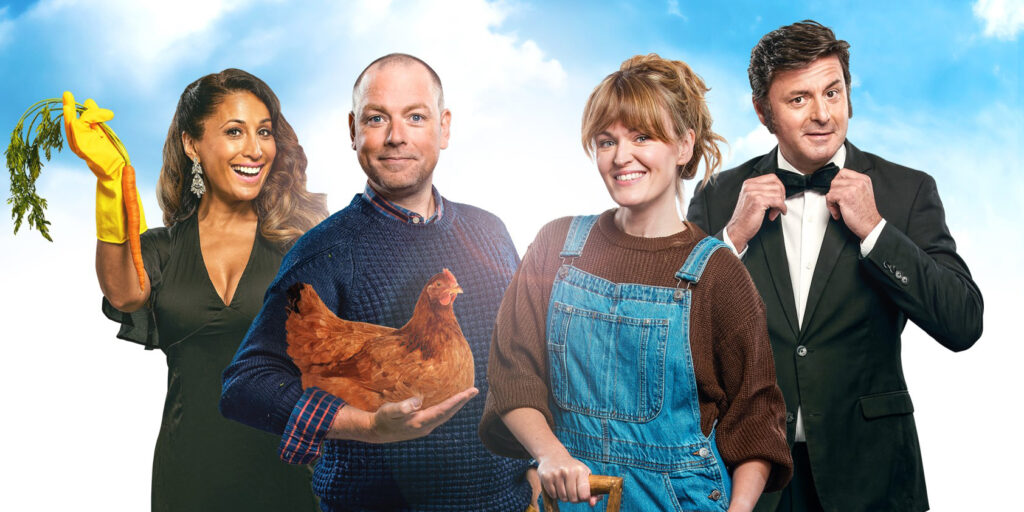 Anyone of a certain age will have watched The Good Life during the 1970s, a golden age for British sitcoms which also includes Dad’s Army, Porridge and the greatest of them all, Fawlty Towers. It ran for 4 series between 1975 and 1978 and consisted of a modest 30 episodes. John Esmonde and Bob Larbey wrote The Good Life for Richard Briers, the only cast member who was well known before the series was broadcast. Larbey and Esmonde were inspired by Larbey’s 40th birthday, which seemed to them a milestone in most people’s lives. Their story has the Goods’ decision to pursue self-sufficiency conflicting sharply with the habits of the Leadbetters, who live next door. The conflict between the neighbours, balanced with an increasingly close friendship, creates comic tension as that friendship is tried to its limits. Esmonde and Larbey chose Felicity Kendal and Penelope Keith after seeing them on stage together in The Norman Conquests.

Fiery Angel have taken the brave decision to tour a stage adaptation following in the footsteps of many other sitcom adaptations including Dad’s Army, Porridge, ‘Allo ‘Allo! and perhaps the most bewildering, Last of the Summer Wine.

There is no problem here with the situation however there is very little comedy. Director and Adapter, Jeremy Sams, has cobbled together a few episodes which played out by Briers, Kendal, Keith and Paul Eddington in half hour chunks produced some classic moments of television history.

Rufus Hound (Tom), Sally Tatum (Barbara), Preeya Kalidas (Margo) and Dominic Rowan (Jerry) all work very hard and Rowan is actually very good but none of them reach the heights of the original actors. The real question here is why would anyone want to recreate such an iconic piece of television when you are clearly on a hiding to nothing.

Touring theatre seems to have nosedived since the beginning of the pandemic with producers desperate to replenish their treasure chests by churning out anything other than new and interesting work. Going to the theatre should be a joy whereas sitting through The Good Life was anything but with the occasional laugh provided by an animatronic goat!

Rather ironically in the first act, a prop hadn’t been set which was integral to the plot but as Barbara comments later with reference to a local, ill-fated production of The Sound of Music, “You can’t expect an amateur production to be perfect, can one?”