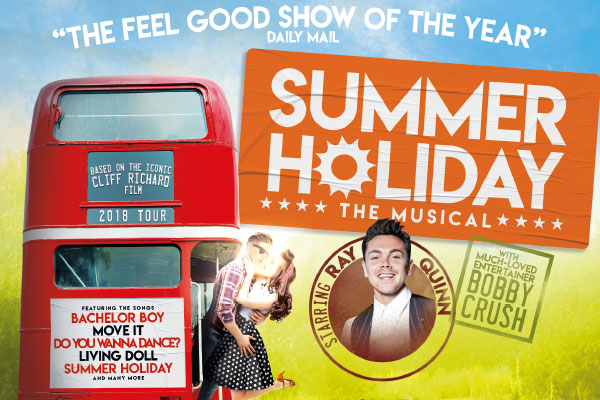 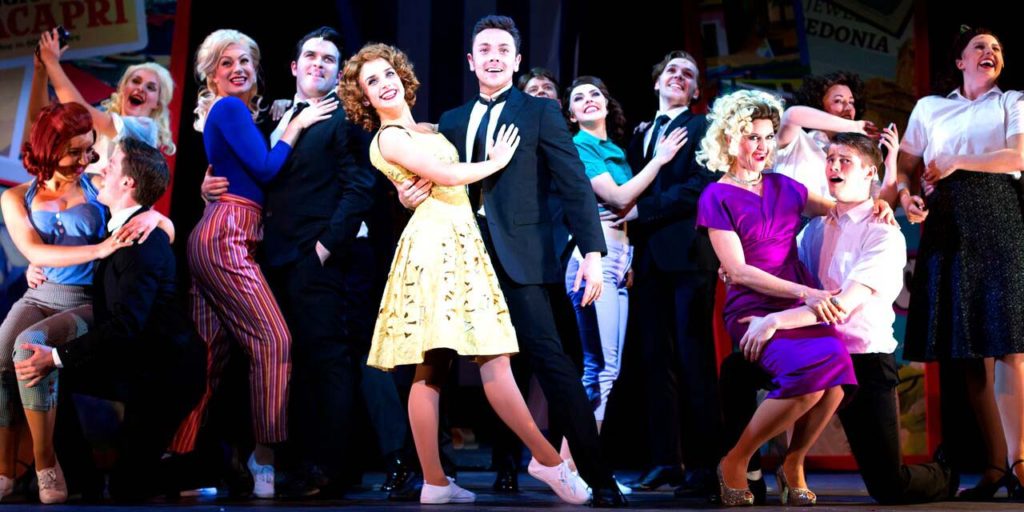 Going to the theatre to see a musical based on a popular 1960s film jammed packed with Cliff Richard songs, you expect to enjoy yourself, and that’s exactly what Summer Holiday – The Musical provides, an evening of feel-good, nostalgic entertainment.

The storyline is well known to Cliff Richard fans and somewhat predictable from the first few scenes which is relaxing as you just sit back and enjoy the tale unfolding without any effort – just the thing for a Summer Holiday experience.

From the first humorous scene, in a rainy London Café, four London Bus Company technicians introduce themselves to the audience as Steve, Edwin and Cyril (played by Billy Roberts, Joe Goldie and Rory Maguire) and plan their Summer Holiday from the idea that Don (Ray Quinn) pitches to them, to tour Europe on a refitted London double-decker bus, cue first crowd pleaser with the hit song Summer Holiday.

The journey begins and soon the boys have rescued three female singers on their way to Athens (played by Gabby Antrobus, Alice Baker and Laura Marie Benson) prompting the obvious I Could Easily Fall in Love With You and Batchelor Boy melodies. To add to the travelling couples, Sophie Matthew plays Barbara, as one of the strongest cast members, as a stow away from a pushy Mother and bumbling agent ( Taryn Sudding and Wayne Smith) who add a splash of humour to the now predictable storyline.

The cast is supported by a brilliant ensemble, with Sussex local Matt Trevorrow, making his professional debut. The dancing standard is excellent and full of energy, if anything a little contained due to the stage size, but some great choreography using Heelys as skis and a classic “armography” piece. Along with the dancing, the iconic London double-decker bus rightly dominated the stage and added to the feel-good British Summer atmosphere created on stage.

The audience lapped up the continuous Cliff hits on it’s opening night in Brighton and there is much to like about this show. Could it be slightly more polished and is the storyline a little dated? Yes probably, but that somehow adds to the charm and does not distract from the performances or the obvious delight from the theatregoers. Summer Holiday deserved it’s standing ovation encore and which leaves you with a cheerful summer smile and quietly humming Cliff songs to yourself for the rest of the week.