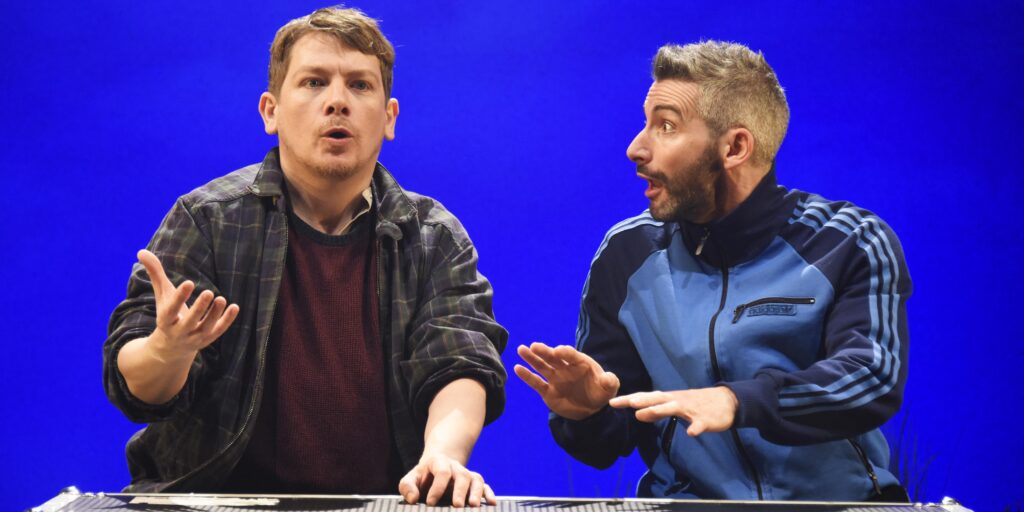 Maire Jones’s play Stones in his Pockets is playing at Theatre Royal Brighton, 29th July until Saturday 3rd August. Energetically, Owen Sharpe and Kevin Trainor portray every character in this play using accents and body language to distinguish between the characters as the story slowly develops. Based in a small village in Ireland, Jake and Charlie meet as extras on a Hollywood film both with personal stories of unfulfilled lives.

This is a play where you really need to concentrate, with multiple stories being played out by the two actors. The story is told during the making of the Hollywood film and touches on relationships made during this time interspaced with expectations of the characters around their future and the impact they have had on other members of the close community.

The jumping around from past to present is well done and allows further depth to the play including in the second half the story of a young man’s suicide and the interplay between the more modern-day pressure to finish the film and the local traditional Irish values played out through the funeral arrangements and farming traditions.

This wasn’t the easiest or most relaxing of watches as it almost feels a little chaotic. I think this is because there is a lot of detail in the relatively short play and the constant changing of characters means you have to pay attention to the actors’ mannerisms and accents. The two actors’ give it their all and conversely, this adds to the excitement and enjoyment of the performance.