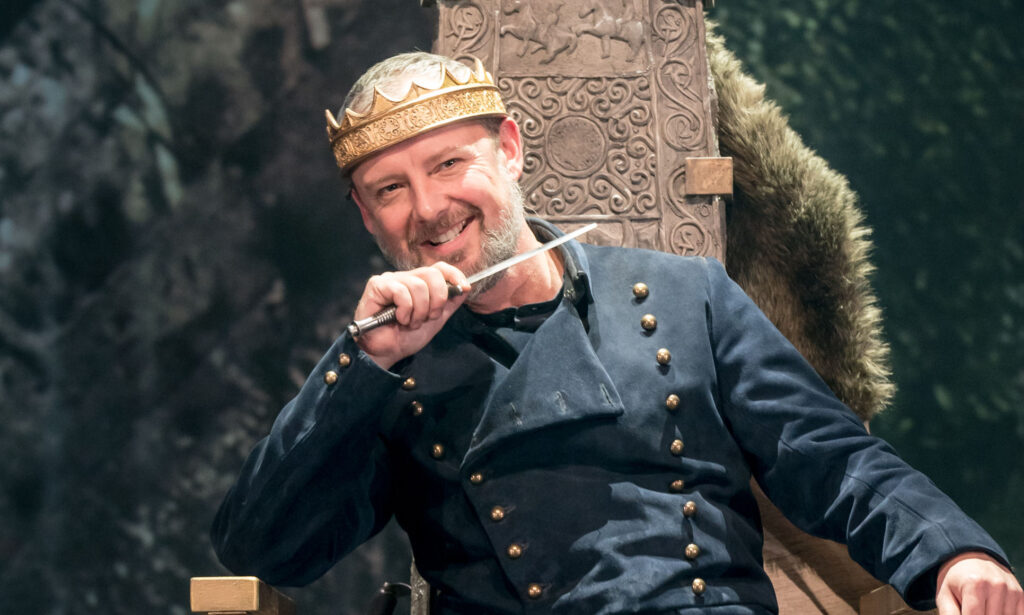 “If chance will have me king, why, chance may crown me”

At an age where tyranny and power corruption seem so unfortunately prevalent in worldwide politics, Chichester Festival Theatre’s production of Macbeth could not have been more perfectly timed.

Shakespeare’s timeless tragedy is a demonstration of how power can corrupt the noblest of men, turning them towards deceit, betrayal and madness.

John Simm’s Macbeth is everything you would want him to be. He opens as a quiet, noble man who takes pride in small victories and appreciates his friends, but once the idea of murder is seeded into his mind by Lady M and the three witches, he grows in power, fear and disillusion. Simm’s commanding stage presence is dominating, and even when he sinks into the character’s darkest moments, he is still quick-witted, delivering comical remarks throughout. He delivers Shakespeare’s poetic speeches with an unnerving calmness and can switch from a relaxed persona to a man filled with fury instantly, which was enjoyably unpredictable.

As Lady Macbeth, Dervla Kirwan was fascinating to watch, transforming from a calm and calculating manipulator, into a genuinely chilling spectral figure as Lady M’s deeds catch up with her. Persuasive and appropriately ambitious, Kirwan demonstrated a true power over the script and the story – very apt for her character.

The comic in a tragedy can be a difficult role to fill, but Harry Peacock shone as the Porter. His scene is certainly one of the more memorable of the play, as Peacock performed his lines with originality and wittiness, beautifully breaking the tension from the dramatic scene prior.

The staging is excellent: circular (very effective for Shakespeare), with a glass floor revealing rocks underfoot, and a glass backdrop behind. This is used particularly well during moments of battle and death, when the stage opens up and characters are put to rest in the ground beneath, hauntingly reminiscent of a burial and an added reminder to the characters that death is just below them at all times.

This stage movement is also used as the three witches use their cauldron, as a raging fire rises from beneath the stage and the three of them chant their spells; it was gripping like nothing I have seen on stage before and nice to see Chichester pushing staging to the limit and being daring.

The lighting above the stage is a crown hanging above the actors throughout, a reminder of the power of the throne looming on Macbeth’s mind at all times. The glass backdrop was used excellently at points, revealing the action towards the back of the stage but also reflecting the characters in the foreground, who would appear almost ghost-like to add to the haunting theme displayed throughout the play. This glass partition transformed into a screen for projection for other scenes, displaying stormy weather, blood, characters’ faces, and words from the script. Whilst it was a clear statement that this was to be a modern adaptation of the classic text, at points it seemed unnecessary and distracting from the content on stage.

Chichester Festival Theatre’s latest production of Macbeth is a blend of tradition in the arts, and modern technology. The starring actors are certainly the highlight of the performance, and their command of the audience, and the Bard’s words, is masterly.