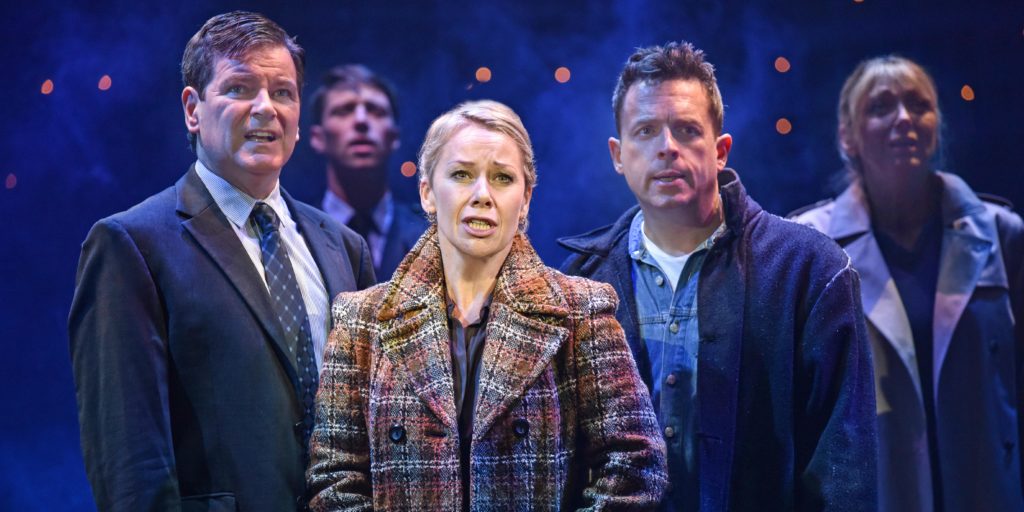 With Rain Man playing at the Theatre Royal Brighton and Blood Brothers opening at The Hawth in Crawley last night it seems that the story of two brothers initially unaware of each other’s existence and embarking on a life-changing journey seems to be a theme in theatres in the South East this week.

Of course, Blood Brothers has been in South East before, many, many times with a new tour each year. Nevertheless, The Hawth was still full last night with many of the audience newcomers to the show proving that there is still plenty of mileage left for this iconic musical.

Set in the slums of Liverpool, Mrs Johnstone, single parent to seven children is finding it hard to make ends meet. When she realises he is pregnant to twins she reluctantly agrees to give one of the babies to her childless employer to bring up as her own. The transaction is done secretly and shrouded in superstition it is agreed that the twin boys should never know of each other’s existence. Years later they meet and form an unbreakable bond despite their different upbringings and the challenges that life throws at them.

For this production, the lead names on the programme are very impressive. Linzi Hateley is West End royalty, whose credits include some of the most iconic musical theatre roles ever written, it seems fitting that she is adding Mrs Johnstone to the list. Robbie Scotcher who takes on the role of the narrator also has an impressive resume and neither disappoint. Hateley’s portrayal of Mrs Johnstone is heartfelt and sincere whereas Scotcher gives a delightfully sinister air as he manipulates situations to bring the story to it’s dramatic conclusion.

There are several Blood Brothers veterans in the show. Sean Jones, Mark Hutchinson who play twins Micky and Eddie, Danielle Corlass who plays Micky’s long-term girlfriend Linda, Sarah Jayne Buckley and Tim Churchill (Mr and Mrs Lyons), Daniel Taylor (Sammy) and Graham Martin (policeman/teacher) are all reprising their roles from either West End or previous touring casts. Their experience is palpable as they bring characters to life and take them on their journey from childhood innocence to adult troubles.

Overall, Blood Brothers is an on-going phenomenon that shows no signs of slowing down. The audience gasped and responded in all the right places and gave a deserved standing ovation at the end. If you have not seen Blood Brothers before, it is worth a visit and if you have, why not go again?

Blood Brothers is being performed at The Hawth Theatre in Crawley until Saturday 20th October.
Tickets available here.