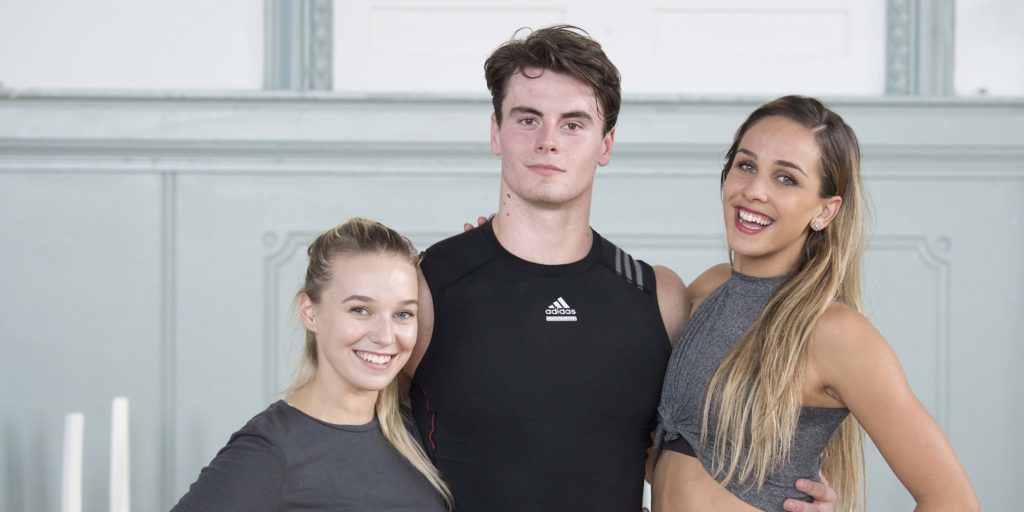 How does it feel taking on such iconic roles?

Michael: Once you get over the fact that it’s quite a daunting role to take on because it’s so well-known it’s just really exciting. Everyone is so familiar with the show and they’re so familiar with the characters that you’re just excited to do it justice, you’re ready to put in the work and bring it to life.

Simone: I agree. It’s so exciting. Being able to play such an iconic role in a show that brings the movie to life on stage is an amazing privilege.

Kira: It is really exciting but of course there’s also a lot of pressure to do the characters justice because they are so well-known and so iconic.

What’s your approach in terms of bringing a fresh take to the characters?

Kira: I don’t want to stray too far from what Jennifer Grey did in the film because I personally feel the choices she makes are things I’d do as well. Although I’m being a bit bolder with the choices so when she’s being sexy, I want people to be able to see that “Baby” can be really sexy, fiery and smart – to really show the depths to her.

Michael: It’s about ‘How would I behave if I was in the same situations?’ That frees you up to bring something of yourself to the role, to put elements of yourself into the portrayal.

Simone: It’s about thinking ‘What would I do in this situation?’ whilst thinking about Penny and the era in which the story is set, namely 1963. It’s such a different time to now and what she goes through is quite heavy so to think ‘How would I feel if I was in that time and that situation?’ is a great help because in real life I have a very different personality to her.

In what ways can you relate to your characters? And in what ways are they completely different?

Simone: The big red flag for me is what Penny goes through. She’s in quite a sticky situation and has to make some big decisions. I feel she’s quite isolated and that’s a struggle for me to understand because I’ve never really been isolated myself or had to make massive decisions that would have such a major effect on my life. But I love the fieriness of her, although it’s hard being mean to Kira on stage when we get on so well, I can relate to her passion for dance.

Kira: I’m not proud to say it but I’m not like Baby in terms of education. She knows a lot about politics and what goes on in the world but I feel I’m not in touch with that side of myself as much. But I do feel quite similar to her in that I remember when I was 17 and the first time I fell in love and doing so much to be close to that person – things I’d never think to do on a regular basis just to be with someone. I also relate to the closeness she feels with her family.

Michael: Obviously Johnny in the show is a dancer and I trained in dance myself so that’s kind of the hook I latch onto. We come from a similar background, with the training everyone has to go through, but fortunately I haven’t gone through the serious, crippling financial situation Johnny has been through or the unexplained relationship with his dad and the fact his mum is never mentioned. That’s a whole grey area that we don’t even know about and it’s a part of the character that I have to work to understand.

How is the classic story recreated on stage?

Kira: The script is the same as the film scene-by-scene, with a few extra little surprises in there, and I feel it’s done really well. The set is a smaller replica of the actual Kellerman’s resort and in fact there are three big trucks they use for the staff quarters, the inside and outside of the hotel and the resort cabins. The music, of course, is so iconic and it’s done so well with the live band being on stage. They are fantastic musicians.

Michael: The team do such a good job of bringing the story to the stage so it’s like reliving the film live. You’ve got all the dances, all the music, the band’s on stage kicking butt – it’s such a fun show.

Can you recall when you first saw the film and the impact it had on you?

Kira: I vividly remember watching it on videotape because my mum had it and I remember watching the dance scenes in the staff quarters and I was like ‘Oh my God!’ So I knew exactly how Baby feels when she goes to the resort. It was mesmerising.

Michael: I remember my mum watching it when I was really young and being like ‘That’s not my type of film’ as I went off to play sports or whatever. Then I revisited it when I got into the dance industry more and I was like ‘Actually, it’s a really cool film’. The more time I spent in rehearsals looking through the script, which is the same as the film, we talked a lot about it being about bravery and becoming the person you want to be, regardless of your situation and people telling you you can’t. That’s very inspiring and I think that’s why it has done so well.

Simone: When I saw it I was like ‘I just want to be a part of this, to just be in there’ especially with scenes like Do You Love Me? where they’re just having a party and I remember watching the Mambo and thinking ‘My goodness, I want to do that!’ and now I get to do it.

Michael and Kira, how much pressure is there to get the legendary lift right?

Kira: It’s a huge pressure because everyone is waiting for that lift. It’s so iconic to the film, isn’t it? But when it comes to recreating it, I trust Michael. I trust that even if I fall he’ll have my back, but touch wood nothing’s gone wrong yet.

Michael: The fun bit is when we do the lift in the water, which is done by visual effects. That’s fun because it’s where you get to mess it up and go wrong.

What other challenges does the show present for you physically?

Kira: I’m a trained dancer, but I have to appear like I’m not. I have to reverse everything I’ve been taughtand make it look bad, without making it look like I’m trying to be bad.

Simone: The Mambo is quite challenging. It sort of comes out of nowhere and is really explosive and fast-paced.

Michael: It’s a very dance-heavy show, as you’d expect, but I don’t think I realised quite how dance-heavy it is until we started rehearsals. There are a few numbers back to back and you’re dripping with sweat, like ‘Oh man, we’ve got to go on for the next number’ before you’ve even got into the next costume. Physically it’s a tough show but that’s why we do it – we love that challenge.

And what are the emotional challenges?

Michael: All of our characters have a moment where we have to go to that place emotionally and it’s always a challenge, but as an actor I feel like those are the fun moments too because they’re the moments where you can be brave enough to go to that place and feel all those feelings. You trust the audience is there with you and your partner is with you on stage emotionally too.

Simone: I think most of us break down into tears at some point in the show and you don’t want to make it look fake so you have to make it as real as possible. When you come off stage after a scene like that, you just have to shake it off because you get really emotional. It’s a rollercoaster but it’s exciting.

Kira: You have to take yourself to a place that maybe you don’t want to go to on that day but you just have to let yourself go there. In the scene where Baby is talking to her dad there’s this big monologue and it’s quite emotional, then you have to come off from that scene and go into the next scene with a new mindset whereas in real life you’d have a few hours to sort yourself out.

The music is a massive part of the Dirty Dancing experience. Do you have a favourite song from the show?

Kira: Hungry Eyes. I love that song and always have. Before I even auditioned for the show it was my alarm in the morning!

Michael: For me it’s (I’ve Had) The Time Of My Life. It was a massive hit and it’s such a popular song.But it’s my favourite because it comes right at the end of the show. It’s such a climactic moment where everyone is on stage dancing together and there’s a moment where Johnny comes through the crowd so there’s a real connection with the audience.

Simone: Mine’s Do You Love Me? Love the routine, love the song, and it feels free where it’s like a party scene with your mates. It’s really raw and fun.

Michael, this is your professional debut. How are you finding it?

Michael: It’s been indescribable really. It’s been an amazing journey and I’m so privileged to be able to do it. It’s a great role, a great show, the cast have been amazing, the team have been fantastic, everyone’s helped me along on the journey and it feels like we’ve become a really strong team.

What are you all most looking forward to about taking the show on tour?

Kira: I love connecting with different audiences in different venues. We get excited moving around the country so we’re buzzing on stage and the audience feeds off that.

Michael: I think we’re really lucky to take the show on tour because we get an opening night every week. It also means you get to perform for a huge range of people and the fact you’re travelling together makes you a stronger company.

Simone: It keeps it exciting because you’re not within the same four walls for a long time. It feels new each time and for me, being from Australia, getting to travel the UK is awesome.

What’s the one thing you couldn’t be on the road without?

Michael: I’d have to say my NutriBullet…

Simone: For me, it’s my hubby. He’s coming on tour with me so he’ll be my taxi driver.

Kira: I like to have books with me. I do like reading and it’s nice to wind down after shows by taking yourself off to some imaginary place.

Dirty Dancing will play at the Churchill Theatre, Bromley in February.