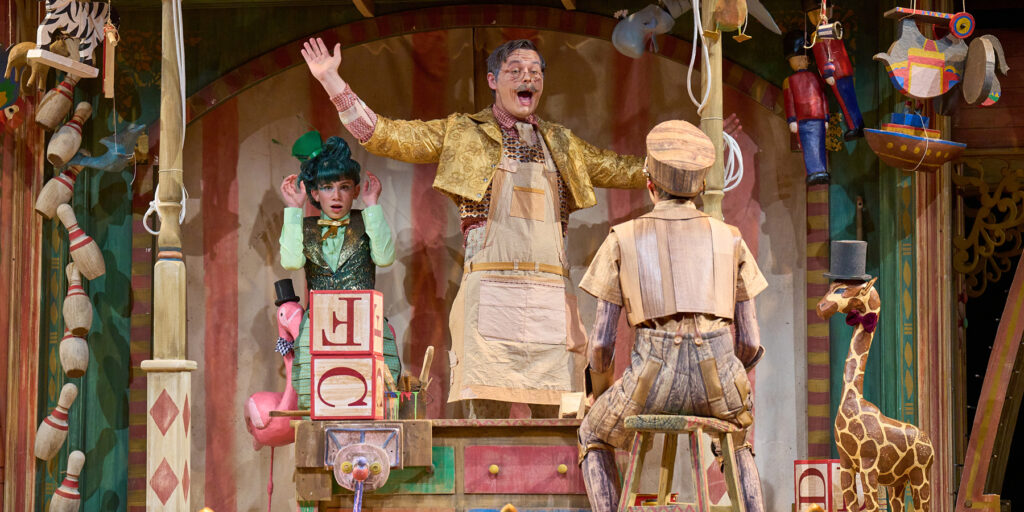 Last year I was fortunate enough to see Pinocchio (directed by Dale Rooks) before it was forced to close when Sussex went into Tier 4. This year (under the direction of Bobby Brook) it has been revisited now with a cast of 68 and the piece has been tweaked to include new dialogue, lyrics and music. With the country yet again facing uncertainty and the imminent threat of restrictions hanging over us, I sincerely hope this run can be completed and not be cut short, ending in the inevitable tears once more!

Adapted by Anna Ledwich, score by Tom Brady, this well-loved tale of Pinocchio tells the story of a puppet carved by Geppetto in the form of a small boy, which to his amazement answers him back! The boy’s intentions are good but he cannot help getting into trouble as he is tempted to discover the wonders of the world. On his travels he encounters many characters along the way but he is dismayed to find his nose grows longer with every lie he tells!

An energetic and sparkling production showcasing the many talents of this award-winning youth theatre, coupled with Simon Higlett’s inventive set that is dominated by a large revolving show wagon morphing into a vast cavern of the feared sea monster and Ryan Dawson Laight’s wonderfully inventive costumes. The muted colour palette fully captures the essence of a magical fairy tale atmosphere.

Hugely enjoyable storytelling made even more so in these strange times with some outstanding performances from this young cast.  In particular Spencer Dixon (who played the French fisherman last year) now stepping up to be sharing the role of Geppetto with Jack Campbell.  He delivers a mature and emotional insight to his character.  Lewis Renninson plays the impressionable wooden boy who learns to grow as a person from his experiences and gives a lively, spirited and poignant interpretation of the toy.  Funmi Ajayi (Fairy) and Honami Davies (Cricket) make a comical double act in their quest to guide the naïve puppet.  Fine support too in some of the minor roles notably charismatic Edward Bromell as a loose-limbed witty Punch and impressive vocals from Ellie Bradbury as Judy.  Jack Taylor entertains as the wily fox as do some of the sea creatures.

A thoroughly enjoyable, enchanting tale skilfully delivered by an enthusiastic and accomplished company of young people.

With theatres slow emergence from the pandemic and the catastrophic damage done to the arts, let us hope 2022 will attract back the somewhat cautious audiences and create many more unforgettable productions in the coming months.