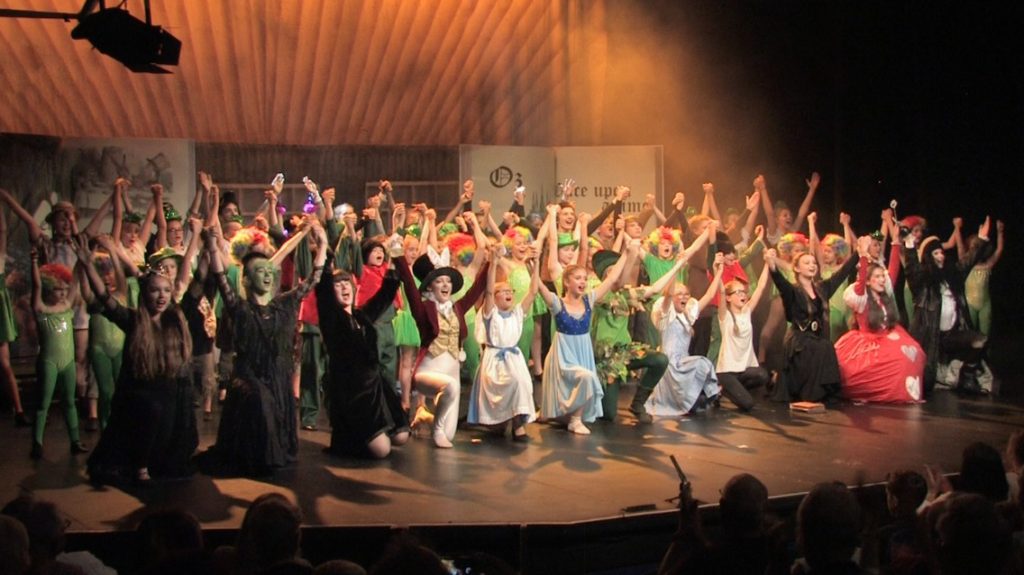 The tale cleverly blended old and new as a group of five orphans fought to save four fairy tale kingdoms – Alice’s Wonderland, Snow White’s Enchanted Wood, Peter Pan’s Neverland and Dorothy’s Emerald City – from the baddies who had banished magic and enslaved their populace.

Sophie Pourett Wythe was enchanting as the White Rabbit, holding the tale together as she led the company through some foot-stomping song and dance routines with lithe grace and great vocals.

The orphans, four of whom had been in previous existences Alice, Snow White, Peter Pan and Dorothy, led the revels endearingly as they visited their former homes to overturn evil, and discovered their true identities.

Charlotte Nield (Niamh/Snow White) earned well-deserved applause as she repeatedly regretted the lack of bluebirds to lend a hand when things got sticky, and Alicia Depper was excellent as bookish Imogen, ably supported by Elliot Meldrum as Barry/Peter, Bo Burt as Dot/Dorothy and Zara Saunders-Griffith as Ali/Alice.

Amber Tichener, who led the East Grinstead cast in a rousing rendition of Rotten to the Core, lived up to her billing as The Evil Queen, as did the aptly-named Misses Grimm – played with relish by Jemma Manuel and India Rose Slack – who were deliciously wicked as the overseers of the orphanage: while Lucy Liegenhals as the Queen of Hearts turned in a stomping performance of Killer Queen – as befitted someone whose favourite phrase was “off with his head”.

Marcus Veneziani’s Captain Hook was the stuff of childish nightmares, but his swaggering menace was nicely counterpointed by Callum O’Rourke who combined a strong vocal performance with an endearing persona as Hook’s not-really-so-very-bad sidekick Smee.

The final villain of the evening was Harriet Lake who led the company in I Want It All as the green-faced Wicked Witch of the West before getting her comeuppance from Dorothy.

A special word of praise is due to Charlotte Pourett Wythe for a lovely and very athletic performance of Last Midnight in her role as the Cheshire Cat, and to Hugo Archibald as the Mad Hatter.

But this original show was essentially an ensemble piece combining the talents of both Bullfrog’s East Grinstead and Sevenoaks branches. From the tiniest, step-perfect performer to the more seasoned veterans this good-hearted musical showcased a full range of theatre talent – and sent an audience full of parents, grandparents and siblings home proudly humming the tunes.

Once Upon a Time will be reprised at the Stag Theatre in Sevenoaks on 15 July.