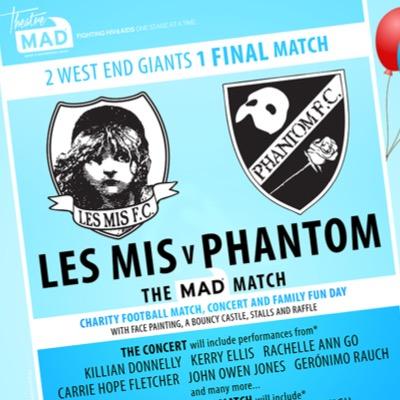 Two years ago, the casts of Les Miserables and Phantom of the Opera, two of the Capital’s longest running shows came Theatre South East’s home town of East Grinstead and took part in a football match to raise money for MAD trust and Macmillan Cancer Support in recognition of Melanie Oakley-Dow’s fight against cancer. Melanie the former Les Misérables wig mistress attended the event as did Peter Karrie, Frances Ruffelle and Eliza Doolittle.

The casts of the two shows were all in attendance either playing or supporting and the atmosphere was fantastic! We were treated to excellent performances and some spectacluar football.

Poor quality (phone) videos of the very first event can be seen here:

Since the match at East Grinstead the event has got bigger and bigger!

The Les Mis vs Phantom MAD Match has now become and annual event and is now (unfortunately for us but good news for Londoners) been relocated to Bromley Arena and attracts much larger crowds.

This year the match will take place this Sunday (2nd August) and the fun filled afternoon promises to be bigger and better than ever! Lots of fun and raising money for fantastic causes – what could be better? 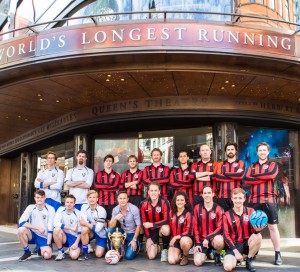 LES MISERABLES V THE PHANTOM OF THE OPERA : The Final Match

Former Chelsea and England footballer Dennis Wise joined cast members from Les Misérables and The Phantom of the Opera on stage at The Queen’s Theatre to give some footballing tips prior to their final showdown match on 2nd August at Bromley Football Club.

The match sees the two giants of the West End,Les Miserables & The Phantom of the Opera, leaving the West End stage behind and heading down to Bromley Arena, not for a singing show down, but for a football match. Following on the success of the last two years they are planning a third and final MAD Match to see who will be the ultimate champion! The match, played to raise funds for the Make A Difference Trust, promises to be a mix of football and fun for all. 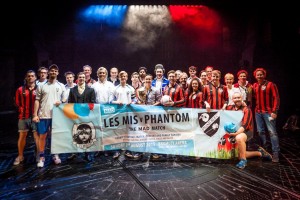 The game kicks off at 3.00pm and players will include Southampton legend Francis Benali and goal keeper Paul Jones. EastEnders’ Jonny Labey and Hollyoaks and Emmerdale star Ayden Callaghan. James Ward-Prowse, the England under 21 captain, will also be joining the fun. Having coached the England Ladies team to their victory over Germany and bronze medal at the World Cup, Mark Sampson will be turning his attentions to the Phantom team. Managing Les Mis, ex West Brom manager Alan Irvine will be hoping to guide his team to a win.

The West End Teams will be joined on the day by celebrities and professional footballers to add to the excitement.

The afternoon will open with a concert at 1.30pm with performances from stars of the West End including, Killian Donnelly, Kerry Ellis, Rachelle Ann Go, John Owen Jones, Carrie Hope Fletcher and Geronimo Rauch.

The day promises to be a fabulous fun day for all the family with face painting, bouncy castle, stalls and a raffle. Food and drink will be available to make for a fabulous summer day out for all of the family.

A donation from the event will also be made to Macmillan Cancer Support in memory of Melanie Oakley-Dow, the former Les Misérables wig mistress.

Tickets are available from £12 for adults and £5 for children.