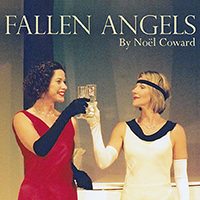 Last night was my first ever visit to Hever Festival and I was looking forward to seeing Fallen Angels by Noel Coward. I arrived in plenty of time and walked down the hill past many a seasoned festival goer enjoying a picnic and a light refreshment before the show. The walk to the open air theatre was lovely through the rose scented garden and up the bank to an area which opened out into a lawn where the theatre had been built.

The play started with the entrance of one of the main characters Julia (Zoe Teverson). I was immediately impressed by how confidently she delivered her dialogue, and she stayed completely in character throughout the whole play. The part of Saunders the maid (Pip Franks) was such an enjoyable character to watch. Her body language and funny lines, as the ‘know it all’ maid, soon had the audience in fits of laughter. Jane (Hayley Ingram) was a confident actress who worked hard with Julia to bring the story to life. I especially enjoyed the scene where the two ladies had had a bit too much champagne to drink and I loved Jane’s physical comedy.

Although Fallen Angels mainly centres around the female characters of the story, the male actors do much to enhance the plot, Fred (Darryl Boot) and Willy (Luke Bateman Le Grand) played their parts ‘to a tee’. Maurice (Richard Hodder) was aloof for most of the play and when he arrived on stage he played his part well.

The whole play was well staged with a fixed set, with Saunders doing most of the work as the maid to set the scenes with props, which worked well.

I had a delightful evening in beautiful surroundings and I shall look forward to visiting Hever Festival again.

Fallen Angels is being performed by Kent Rep as part of Hever Festival, it runs until Saturday 1st August and further details including booking information can be found here.