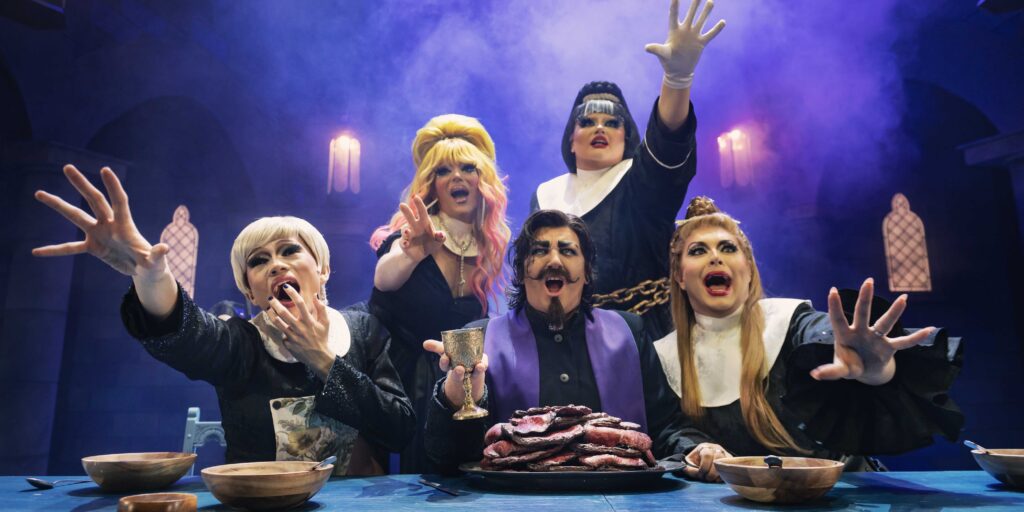 Death Drop: Back in the Habit

Following three sold-out West End runs and a smash hit UK tour, Death Drop is back! The drag murder mystery sensation is returning with a brand-new show: Death Drop: Back In The Habit. This laugh a minute show will feature some amazing casting: RuPaul Drag Race UK stars Cheryl Hole, Victoria Scone and River Medway, together with Drag King LoUis CYfer and a full drag supporting cast. The show opens at the Theatre Royal Brighton on Tuesday 13th December.

What should we expect from Death Drop: Back in the Habit and what makes it so unique? Producer Chris Clegg and director Jesse Jones tell us more.

‘Death Drop lives in the murder mystery world,’ says Chris Clegg, producer of the second play in what looks like being a series, Death Drop: Back in the Habit, by which he means everything from The Mousetrap through Knives Out to Death on the Nile. ‘But this time there’s horror and, of course, you get drag mixed in, which makes things more fun.’

‘The reason we did the first Death Drop,’ says director Jesse Jones, staff director at the National Theatre and founder of Bristol’s highly respected Wardrobe Ensemble, ‘was that we asked ourselves, What do audiences need after a pandemic? And the answer was “joy”! Lots of silliness, lots of laughs, lots of entertainment and that’s what Death Drop delivers. The joy that the audience shares with the cast on stage is infectious. So being able to come back and do Death Drop a second time around was a no-brainer.’

And as a serious theatre director, no one knows better than Jesse that cross-dressing is a respected theatrical tradition that goes back to Shakespeare, where all the performers were male… and some were dressed as women. Then, of course, there are major productions like La Cage Aux Folles and Priscilla Queen of the Desert that featured, or were centred around, drag.

‘We wanted to bring drag back to theatre,’ says Chris, ‘to prove that it’s not just something for pubs and clubs where you see some lip-synching and hear some jokes.’ And he knows what he’s talking about, having elevated drag to a major West End phenomenon a couple of years ago. The first incarnation of Death Drop actually re-opened the West End, becoming the first show after the pandemic closed down theatres nationwide, going on to have three sold-out runs at legendary London theatres, The Garrick and The Criterion. And there are not many plays that do so well that they get a sequel!

‘It’s new characters, new story, new everything and you don’t need to have seen the first one to see this,’ chips in Chris of this sparkling new sequel. ‘And you don’t need to know anything about RuPaul’s Drag Race. But you do need to lean into the ridiculousness of it.’

And there will be plenty of that bearing in mind we are now in a convent where the most highly made-up nuns you’ve seen in your life are facing a culling thanks to an unknown murderer in their midst, pitching it somewhere between Sister Act and Scream. ‘There are some strange goings-on at the Convent of St. Babs,’ says Chris, trying not to give too much away. ‘A priest from the Vatican is sent to see why these nuns aren’t quite following the rules and then weird things start to occur. Like nuns being slayed all over the place…’

Another huge draw, apart from the story and the madness and the sky-high production values, is a constantly-changing cast of some of the biggest and best drag performers in the world. Quite literally! Since the curtain first rose on Death Drop, stars have included Courtney Act, Latrice Royale, Monet X Change, Vinegar Strokes, Kitty Scott-Claus, Anna Phalyactic, Holly Stars, JuJuBee… all huge names. And Death Drop: Back in the Habit will be no different with an international superstar cast being lined up as we speak including William and Cheryl Hole, both household names from RuPaul’s Drag Race. There are also drag kings to play the male parts. ‘Drag kings are an under-represented side of the community,’ says Chris, ‘so we feature them heavily in the show.’

As far as audience expectations of the first Death Drop were concerned, ‘everyone buying a ticket knew it was going to be fun and outrageous and silly,’ says Jesse, ‘but I think they didn’t necessarily expect the theatrical rigour to it. I don’t think they expected the script to hold together as well as it does. We had people coming in on a murder mystery ticket and that was great because this is a play that’s been painstakingly written [by Rob Evans] and choreographed and rehearsed.’

Chris agrees. ‘We have a lot of people who haven’t been to the theatre before who are drag fans,’ says Chris, ‘and we have a lot of people who are theatre fans who haven’t seen much drag before, so it’s a great mixed audience. There are sixteen-year-old girls sitting next to older people who are into serious theatre and want to see something different. It has outrageous moments but it’s a legitimate piece of theatre along the lines of Noises Off. There are even elements of old-school pantomime in there.’ Not that you would ever dare mention the term ‘pantomime dame’ in front of these drag superstars. But we know what we mean, don’t we?

‘There are definitely elements of pantomime comedy in it,’ chips in Jesse, ‘but it doesn’t follow the format of pantomime. It’s a hybrid of the murder mystery, the slasher horror genre, but with comedy. We do think of it as something like The Play That Goes Wrong. But the older end of a pantomime audience would love it. At its heart it’s comedy: drag queens do Scary Movie. With special effects and murders and possessions. Where the Death Drop brand is cooking on gas is where we get the kind of the hot spot of theatre crashing into the drag world.’

As for the rest of the production, there has been no expense spared, including an internationally renowned set designer in the person of Peter McKintosh. ‘He’s above and beyond anyone I’ve worked with before,’ says Chris. ‘He did Guys ’n’ Dolls in the West End and has just got that eye.’

With his experience at the National and from Wardrobe, Jesse ‘keeps things grounded, makes sure it’s a play and that everything makes sense,’ says Chris, while his job is to heighten the sillier side of things. ‘And Jesse has a great way with actors because, although a lot of these stars have done theatre before, some of them have the raw talent and have never worked from a script. And he’s got a really silly brain as well, so he leans into the silliness… I’m playing the drag end and he’s playing the respectable theatre side and we meet in the middle.’

‘People are basically buying their ticket because they want a good night out,’ says Jesse, as we wrap up. ‘That might be a musical or a comedy show, or they might be huge Drag Race fans, but the unifying thing is that they’re there to be entertained… and we can certainly deliver that.’

Death Drop: Back in the Habit plays at the Theatre Royal Brighton from 13th – 24th December 2022.

One thought on “Interview with producer Chris Clegg and director Jesse Jones | Death Drop: Back in the Habit.”