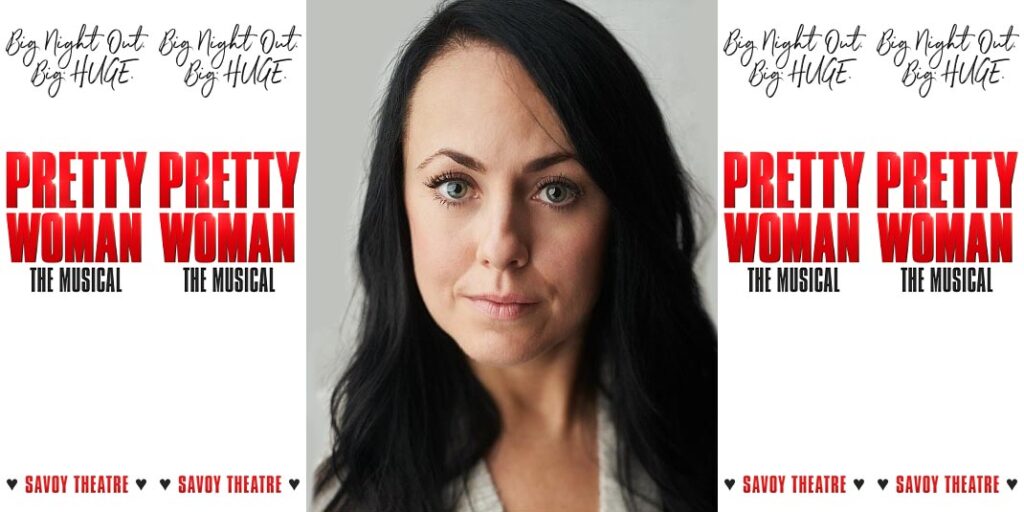 Hannah Ducharme is currently in the cast of Pretty Woman at the Savoy Theatre playing Amanda and covering the lead role of Kit de Luca when needed. She kindly gave up some of her time to talk to me about her background, career and all things Pretty Woman.

Hannah, tell me a little about yourself and your background, what was your journey to the West End?

I originally trained in Musical Theatre at Doreen Bird College of Performing Arts, training in all aspects of dance, singing and acting. When I left there, I auditioned for ‘Spirit of the Dance’ and was lucky enough to get the role. We underwent 6/8 weeks of intensive training in Irish Dancing for the show. We toured all over the place and then we were resident in various cities in America.

Spirit of the Dance was very hard on the body so after that I needed to step back from dancing and instead worked on the Royal Caribbean Cruise Ships as a singer. Nowadays on cruises they put on full musicals and this is where I played Scaramouche in ‘We Will Rock You.’ It was a really great way of getting into Musical Theatre. After ten years working on the ships, I decided to start auditioning for shoreside roles and was fortunate to get Bat out of Hell. I have been pretty lucky.

Bat out of Hell opened in 2017 with three months in Manchester, three months at the London Coliseum and then we took the show to Canada, returning to London in 2018 with a year’s residency at the Dominion Theatre.

So now you play Amanda and are first cover Kit de Luca in Pretty Woman. Please can you explain in your own words the difference between swings, covers and ensembles.

Essentially the ensemble are the people who are not leads, they are in the background dancing, singing and high kicking etc. This is quite a tough job in itself.

A swing would be someone who covers all of the ensemble, swings are normally offstage but if I was to go on as Kit one day then one of the swings would step into my ensemble track. This is an incredibly hard job to have because they have to learn each role and it may mean that they are on as one character one day and the next day someone completely different. They have to learn very quickly where they are meant to be and who they are partnering with. I really appreciate what a really tricky job this is. I was a swing on Bat out of Hell for the first year and it was really tough.

When one of the leads is not performing, which could be for sickness or annual leave, an understudy or cover would step up from the ensemble to take their role. That is what I am.

So in a nutshell, If Rachel (Wooding) can’t play Kit de Luca for any reason, I step and play her role and then a swing would take my place in the ensemble. This may be planned in advance if it is an allocated holiday date, but it could be as short as three or four hours notice.

Kit’s role is very vocal, how do you cope?

Rachael has the most incredible power house voice and is such a trooper, there are not many things that bother her vocally and I am lucky in the sense that I have quite a strong vocal range as well so if I have a bit of a tickle in the throat I can use it to my advantage a lot of the time because with Kit she can be raspy and she can have a bit of a growl to her voice without it affecting the vocals.

So is it fair to say that you enjoy playing Kit de Luca?

I love her so much! Kit is Vivian’s best friend and her confidant, but you get to play, have fun and absolutely sing your face off, it is such a fantastic part.

We [the cast] just have a good time, everyone gets on so well, there is no other way to describe it, they are such a great bunch of people. I am so lucky that I get to see them everyday, have so much fun and call it work.

I know everyone says it, but this really is such a fantastic company, we all get on very well. I think that’s why most people have stayed on, it is because it is such a lovely company to be part of.

You are about to have a cast change, do you think this will change the dynamics?

Apart from the odd one or two cast members who have left during the run, this will be the biggest cast change since opening.

We are in rehearsals with the new cast at the moment, rehearsals are long and tiring but they are all going very well. All the new cast seem absolutely lovely and are slotting in very well. I think it will be fine, nice energy breeds nice energy, you come into a building and you are surrounded by people who are having fun with you, if they include you and make you feel comfortable, then that makes you a happier person.

Their first show is in a week’s time. It’s very exciting.

Finally, the usual question… If you could play any role what would it be?

I would LOVE  to go back and play Scaramouche again, but if it is a role I haven’t played yet, it would either be Elphaba in Wicked or Roxie in Chicago.

Hannah would definitely be fantastic in either role.