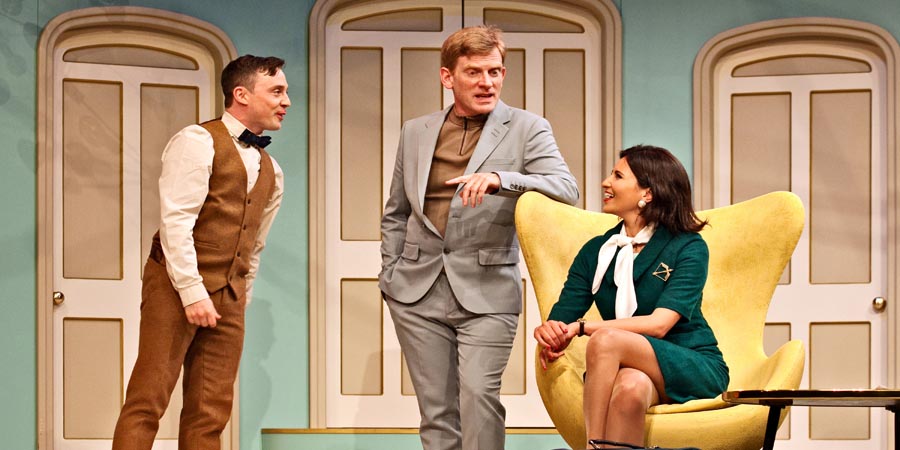 Boeing-Boeing is a French farce written by Marc Camoletti and translated by Beverley Cross and Francis Evans. It is set in 1962 in Bernard’s penthouse apartment, near Orly airport in Paris. Bek Palmer’s wonderful set design resembles an Armillary sphere and acts as a tremendous metaphor for the global travels of three of the main characters or it could just be a huge gyroscope which are used in compasses and automatic pilots on aircraft.

Bernard, played by John Dorney, is a Parisian playboy who is engaged to three air hostesses from different airlines. Thanks to his knowledge of airline timetables, he carefully organises their visits so that none of them will meet each other.

Helping to carry out this juggling act is his long-suffering, droll housekeeper Bertha, perfectly played by Jo Castleton, who changes photographs and ensures that the appropriate meals are prepared for the different foreign flight attendants – and is feeling the pressure of Bernard’s continual subterfuge.

When an old school friend, visits from the country, looking to find a girlfriend, things begin to unravel as Bernard explains his situation. Paul Sandy’s portrayal as the innocent, naive Robert is a delight to watch.

The three air hostesses are typical stereotypes of their country. Isabel Della-Porta is the brash glamorous American working for TWA who tries to control Bernard. Nathalie Barclay is the sexy, romantic Gabriella from Alitalia and completing the trio is Jessica Dennis as Gretchen, the strident domineering Lufthansa stewardess. They all convincingly play their roles with exuberance and pizzazz.

Things start to go terribly wrong when bad weather, faster planes and delays cause all three girls to turn up at the flat at the same time creating farcical results as Bernard and Robert try to keep them apart.

Director Michael Cabot keeps this fast-paced farce on the boil with split-second timing. Doors slam with regularity as the stewardesses are ushered from bedrooms to the bathroom and the sitting room. All the essential elements of farce are deftly executed by this highly talented cast, as the situation becomes more and more complicated. The denouement is very funny as Bernard gets his comeuppance and Robert his wife.

This is an excellent evening’s entertainment, full of fun, with the only downside being the pitiful size of the audience. This show deserves a much fuller auditorium so catch it on its tour which runs until the end of July.