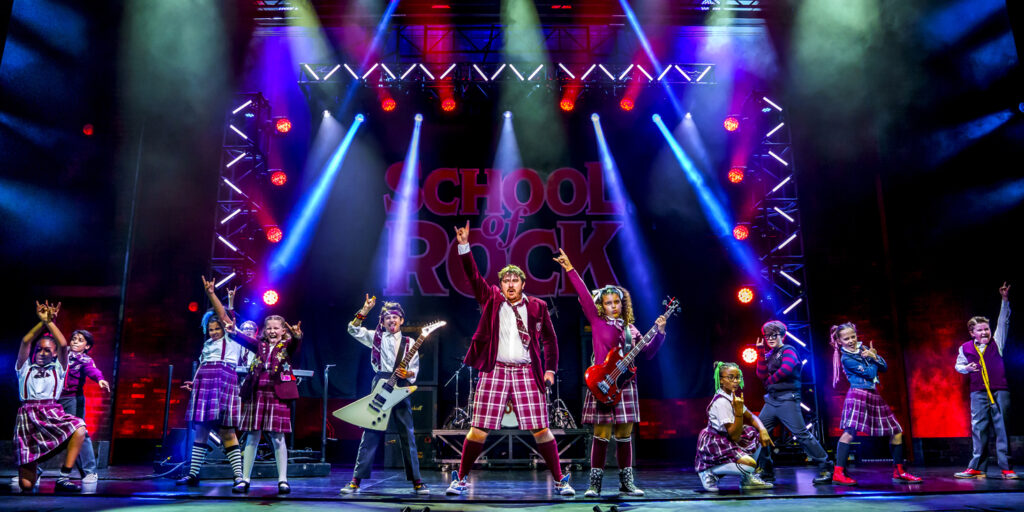 They say never work with children or animals, but the adult cast and creatives of School of Rock are thrilled to be sharing the stage with so many talented youngsters.

“They are so inspiring to a new generation,” raves Jake Sharp, who stars as renegade music teacher Dewey Finn in the first ever UK and Ireland touring production of Andrew Lloyd Webber’s smash hit musical.

“Lots of them have previously come to see the show and now they’re in it. The energy that they bring, the natural energy that young people have, is amazing and it’s a complete pleasure being on stage with them. It keeps the show real and raw all the time.”

Having previously played Dewey in the West End, the actor also feels School of Rock is the perfect show for right now. “It’s completely joyous,” he says. “It’s inclusive, positive and optimistic, which is what we all need after everything we’ve been through recently.”

Associate director Chris Keys, who has been with the show since it opened at the New London Theatre (now the Gillian Lynne Theatre) in 2016, couldn’t agree more, saying: “There’s such a feel-good factor to it. With theatres having been closed for so long, it’s great escapism. It’s fun, it’s funny and it really demonstrates the sheer power of music, for the characters in the show and also for giving audiences such an entertaining evening out.”

Based on the 2003 film starring Jack Black, the Olivier Award-winning musical follows wannabe rockstar Dewey as he poses as a substitute teacher at the prestigious Horace Green School and transforms a diverse bunch of students into a brilliant rock band – with three musical numbers from the film featured alongside 14 original Andrew Lloyd Webber compositions.

With a book by Julian Fellowes, the stage version is very true to the movie. “It’s got the same high-energy spirit and fans will recognise a lot of the lines and plot points,” Chris notes. “But we go more in-depth into the backstories of the children. You see why they need Dewey Finn in their lives and how it changes them as much as it changes him.”

Lloyd Webber’s wife Madeleine first discovered the School of Rock film when the couple’s three then-young children showed it to her in 2006. She fell in love with what she saw as “a charming, funny, irreverent” story about music empowering kids and adults and convinced Andrew that they should buy the rights to it.

Madeleine wrote to the studio, Paramount Pictures, and they turned her down. But she persisted and six years later got the go-ahead, with Lloyd Webber settling on Fellowes (of Gosford Park and Downton Abbey fame) to write the book because of his skills as a storyteller.

The musical had its world premiere at the Winter Garden Theatre, New York, in 2015 and was an instant hit, returning the composer to the rock roots of his 1970 smash Jesus Christ Superstar. And like the first Andrew Lloyd Webber/Tim Rice collaboration Joseph and the Amazing Technicolor Dreamcoat in 1968 it showcases young performers, 42 of them in fact.

The cast features 19 adults, including four principals, and 12 youngsters rocking out at each performance – with the latter rotating across the tour and standbys always waiting in the wings, hence those 42 children on the roster. And the young rockers play all their own instruments completely live, highlighting Lloyd Webber’s passion about music in general and how it enriches the young in particular.

“One of the messages he would always instil when he was talking about this production initially was how he wanted the government to support music and the arts,” says Chris Keys, “so that every child has the opportunity to pick up an instrument, whatever their background and financial resources.

“And one of the key themes of the show is how much connecting with music and the arts can empower us and can give us the release that sometimes we’re missing. The joy that comes from music – you see it on stage and you feel it as an audience member.”

Assembling the young cast for the UK and Ireland tour was a lengthy process. Because of COVID restrictions they were asked to send in video footage followed by Zoom auditions. Then when restrictions were lifted there were in-person sessions.

And as Chris notes: “You have to look a bit outside the box for this show. It’s not your usual stage school kids. Once you’ve seen they can play the instruments you have to nurture the other aspects that are required – the singing, the acting and the movement. It throws up all sorts of challenges but at the same time it’s so rewarding when you see the children make such huge strides from the first day of rehearsals to opening in the show.”

Having joined School of Rock in 2018 as a cover for the leading actor, Jake Sharp went on to alternate the role in the West End and now he’s headlining the tour.

The actor, whose theatre credits also include Mamma Mia! and Sleepless, is thrilled to be revisiting the character of Dewey Finn, saying: “He’s so playful, so childlike and so driven. Playing him is incredibly freeing. Because of the benchmark that Jack Black set, whatever you do – no matter how silly it is – still fits in with the character.”

Jake isn’t worried about being in Jack’s shadow. “Obviously he’s incredible in it but I haven’t rewatched the film since getting the job. You have to put a little bit of him in there, otherwise I think people might be disappointed, but there’s never a conscious effort on my part to imitate him. And if people think I’m anything like him that’s the biggest compliment ever.”

After all the lockdowns and restrictions, he’s excited to be back on stage. “To have a break, then come back gives you a whole new lease of life. The audiences are loving it and it’s been the best experience.”

Rebecca Lock, who plays school principal and Dewey’s eventual love interest Rosalie Mullins, is equally excited to be performing again. “Having been stuck in the house for God knows how long, to be able to see other places and different faces is incredible. You count your blessings every day. And audiences really are loving it. I’ve seen people in the street after the show and they’re almost tearful, going ‘We’ve needed this so much’.”

Joan Cusack starred as Rosalie in the film but, like Jake, Rebecca isn’t daunted about following in the footsteps of a comedy legend. “The character is slightly different. Joan was really kooky whereas my Rosalie is a bit more of a sergeant major.” She laughs. “But as a lover of the film and her in it, of course I’m going to steal all of Joan’s best bits!”

The actress is a musical theatre stalwart with a CV that includes Mary Poppins, The Phantom of the Opera, Heathers and Curtains. She’s particularly taken with School of Rock because: “It’s wonderful being surrounded by all these talented children. Just seeing them pick up their instruments in rehearsals and be brilliant was mind-blowing. It’s a great showcase for all that young talent and it’s such a heartwarming story, not to mention really funny. There’s a love story in there too. It has something for everybody.”

Matthew Rowland is another musical theatre devotee, having been in the likes of Taboo, Charlie and the Chocolate Factory, Waitress and the Joseph revival. Starring as Dewey’s long-suffering roommate Ned Schneebly, he feels School of Rock is special because: “Julian’s script is so funny and so relatable. And Andrew’s music is a great combination of rocking-out on songs like You’re in the Band and the heartfelt, lovely ballads that he’s well-known for writing like Where Did the Rock Go? and If Only You Would Listen. There are so many different styles of music in it.”

Matthew feels one of the show’s key messages is to follow your dream. “You see that in the young characters, as well as the adults, finding the confidence to do what makes them happy, in spite of maybe their parents not seeing or supporting that. At the end the parents get to see how they shine and it’s Dewey who brings it out of them. So yes, I do think it’s about finding your passion and just going for it.”

Matthew and Nadia Violet Johnson, who plays Ned’s domineering girlfriend Patty Di Marco, don’t share much stage time with the young cast. “But because we have a bit of downtime between our last scene in Act One and our first scene in Act Two,” Matthew says, “we’ve taken to doing dance routines and other fun stuff with the kids who are on standby. They’re an absolute joy and it’s like seeing the show through their eyes.”

Making her professional debut in the School of Rock tour, Nadia adds: “It’s so nice to get to know them and have fun with them. The standby kids have to be around in case something happens with the kids who are on stage, and it’s a nice time for them to let off some steam.”

She’s a big fan of the Stick it to the Man number. “It’s all about going for what you want and that’s a theme throughout the show. And Andrew’s music is wonderful. There are a lot of motifs that build and build. It’s so interesting and so clever, and it’s why he is so revered as a composer.”

And like her co-stars, Nadia is thrilled by the reaction to the tour so far. “We haven’t been in theatres for so long, so when you hear that laughter and applause it feels like such a gift,” she says. “It’s amazing.”

School of Rock will be playing at The Hawth Theatre, Crawley between 13-18 June