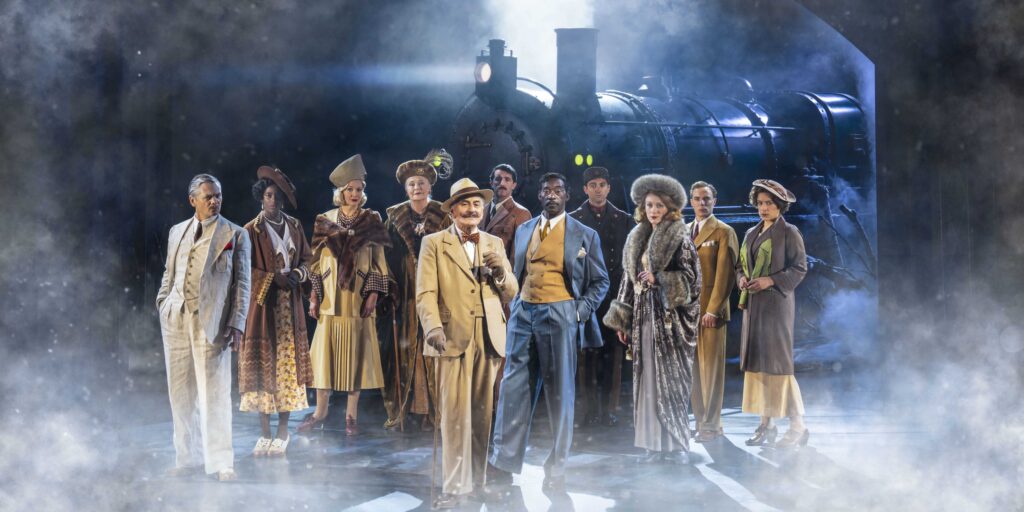 Murder on the Orient Express

Murder on the Orient Express provides a fitting reunion for Jonathan Church and Henry Goodman as part of Chichester Festival Theatre’s 60th Anniversary.  Jonathan’s 10-year tenure as Artistic Director at the theatre included the highly acclaimed The Resistible Rise of Arturo Ui which he directed starring Henry Goodman and the pair are reunited once more.

Agatha Christie is one of the greatest crime fiction writers of all time and her work still continues to be produced.  In fact, The Mousetrap, which opened in the West End in 1952 continues to this day.  Murder on the Orient Express published in 1934 has been skilfully adapted for the stage by Ken Ludwig and coupled with Designer Robert Jones’ magnificent set, brings great theatricality to the production.  He has reduced 12 suspects to 8 but very much keeps to the spirit of this classic thriller.

Famous Belgian detective Hercule Poirot is intending to enjoy a few days break aboard the luxurious Orient Express, boarding it in Istanbul.  The train is unusually packed for the time of year with an eclectic mix of international travellers.  However, the train soon screeches to a halt marooned by a snow drift and is unable to proceed.  By morning there has been a murder…

The victim is a hated man with a criminal past but as the eccentric, moustachioed detective begins his investigations, it would appear that every one of the first-class travellers is a suspect with some connection to the murdered man.

Robert Jones and his creative team do not disappoint.  The stage is dominated by an enormous arch from which a magnificent steam engine appears.  Wheeled carriages are pushed to and fro to create a stylish dining car and sleeping cabins.  The sound and lighting effects are superbly realistic with the cast lavishly and elegantly costumed.

Patrick Robinson (Monsieur Bouc) gives a fine performance, so too Sara Stewart playing the outspoken, flamboyant American actress Helen Hubbard, but the evening belongs to Henry Goodman for his star performance.  He is outstanding as the meticulous Poirot with his methodical approach to case solving and ability to detect a liar, though his moral compass is sorely challenged in this famous thriller.

After a slow beginning this visually spectacular production improves dramatically culminating in a well-deserved standing ovation for Goodman’s impeccable master class in characterisation.